"I have to say this... Chrono Trigger is, to my likes, the best RPG I've ever played. I swear that the number on its score has been well earned. CT is good practically every aspect: great sound, great music, great graphics, great everything! This is the icon of 16-bit role-playing.."

This is a quote from our review that had been written back in 2001 by Necron - in fact, you can see it its full glory in our Chrono Trigger vintage review.

When Chrono Trigger was released in 1995, it caused an uproar in the gaming business. RPGFan awarded the game high scores between 93 and 97%, and famous German Video Games magazine awarded it 94%.

So but why is the games' reputation as it is? The game was released in early 1995, when the new generation of consoles, the Sega Saturn and Sony Playstation were already taking off. So Chrono Trigger was seen as something like a swansong for the aging Super Nintendo game console. Together with Seiken Densetsu 3, this was one of the last big games that Squaresoft made for Nintendo consoles before they announced their next major Final Fantasy game to be released on the Sony PlayStation in 1996. 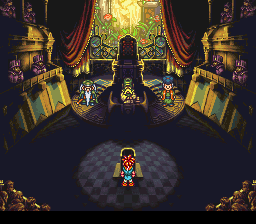 Ah yes, Final Fantasy is a good tranistion to the game itself. When the SaGa series of RPG was often Squaresoft's guinea pig where they tried out new game mechanics, Chrono Trigger was more conservatively designed. The game featured everything that was also present in Final Fantasy: Towns, dungeons, various shops, and last but not least the famous ATB battle system.

Chrono Trigger had a more dynamic approach to battles, though. There was no separate battle screen, Menus of the characters could easily be accessed all at once (so characters didn't have to be swapped around with the X button) and there wasn't even a victory fanfare at the end of a battle.

Music was made in parts by Mr. Nobuo Uematsu, but most of the soundtrack was composed by Yasunori Mitsuda, who would later become famous for his work on the Xeno series.

Some aspects of the game are taken directly from Final Fantasy VI, like some sound assets or background images and the general battle system. Other aspects, like some music compositions from Mr. Uematsu already have some references or resemblances of Final Fantasy VII (like the alarm sound in the future time zone or "Sealed Door").

Unlike Final Fantasy VI, every sprite and enemy in the game is animated, and the artwork has been supervised by Mr. Akira Toriyama, who was famous for the Dragon Ball games and Dragon Quest RPG series of games. 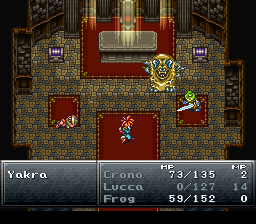 The game itself revolves around a story of time travel, where a group of seemingly random people are pulled into a struggle that reveals that some sort of evil being fell from the sky in the prehistoric age and drains the power of the planet ever since then. The group has to travel to all different ages and find out how to remove this evil being from the face of the planet.

The story is noticeable shorter than Final Fantasy VI, but it also motivates players to restart the game again- Chrono Trigger was one of the first games, if not the first one to offer "New Game +", a mode where the story starts anew but characters keep their level and equipment, so that the final boss can be beaten at any point of the game, which offers a wide variety of endings. The latter part of the game also offers a lot of sidemissions.

The game is currently available on Steam for modern computers. There is a slightly enhanced version of Chrono Trigger available for the Nintendo DS with better text and several bonus dungeons. However, the text there is pretty small and sometimes hard to read on the tiny screen. On an DS XL, it's okay.

If you want to dive into the game - we have a comprehensive screenshot gallery available. But be aware, there are lots of Spoilers! there.

Chrono Trigger is incredibly polished for a game that has been first released in 1995. Gameplay is balanced, battles are fund and there are lots of enemies and places to visit. The initial playtime of 15 - 20 hours might seem short, but with the additional endings and New Game +, the game offers lot to play. Especially the optional dungeons and missions towards the end are pretty well laid out and designed.

The (also basically optional) final dungeon and last boss rush fall a bit short in that regard and feel a bit dull in comparison. And even if the game actually is quite ageless, the underlying technology is a pretty slow and old game console, and it certainly shows at some points, especially in the animations of certain sprites.

But in the end, it's a great game and a impressive display of how advanced games could be on the old SNES.