Back in the old 16-Bit days, there were a few glorious RPGs that are always mentioned when there are discussions about the truly great games of that time. Among them, Final Fantasy VI - or "Final Fantasy III", as it was called back then in the Northern American region, is considered being one of the best. But how does the game stand today, what is the impression of Final Fantasy VI when you play it the fist time now, more than 12 years after its release?

In a German video game magazine sometime in 1994 where Final Fantasy VI was introduced, one of the Final Fantasy team members confessed that they weren't too pleased about how part five of the series turned out to be. This was why they put extra effort in this game, including some new ideas gameplaywise and storywise as well. However, their enthusiasm was quite limited - the cartridge size of only 24 MBit was a heavy burden for the developers. Hironobu Sakaguchi, head of the Final Fantasy III team and director of almost all Final Fantasies once said that the team created 32 MBit of graphics - however, only a fraction of that really made it into the game. This is probably why almost all the towns and landscapes look the same. Same for the monsters - they're fixed, without any animation. Taking a peek to Lunar: Eternal Blue on the Mega CD (or Sega CD) which was released in 1994 as well, you won't have much problems imaging how Final Fantasy VI could have looked on a CD system with plenty of space. 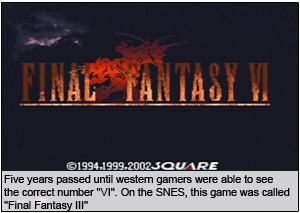 This is what people had hoped for then the PS1-remake of Final Fantasy VI was announced. There was the opportunity to animate the monsters, to brush up all those similar-looking towns... but Square was lazy and just ported it from the SNES to the PS1. Quite horribly though, it takes seconds until you can enter the menu. But Final Fantasy VI remains Final Fantasy VI, and the new intro and outro videos were quite nice to look at. But now, let's leave all that technical smalltalk behind and concentrate on the game

Thousand years ago, the war of the magi stuck the world of Final Fantasy VI. Magical beings, called Espers fought with humans who tried to use their powers for their own use. In the end, almost the whole world was destroyed and the Espers decided to hide in an unknown place. Now, the world flourishes again... or, does it? Corruption, war, ecological catastrophies and steam engines are booming in this so-called "world of balance". On the southern continent, a big empire led by Emperor Gestahl tries to conquer the whole world. Part of their military forces is a technology called "Magitek", which uses magical energy as a source of great offensive power. But where does this magic come from? Apparently, it had left the world after the war of the magi ended.

When Final Fantasy VI starts, the imperial town of Vector is in an uproar. A single girl strikes down soldier after soldier with a power very similar to magic. There are many imperial generals giftet with Magitek, but this girl does not seem to have got any treatment of that kind. Finally, the guards are able to capture her by putting a slave crown upon her head which takes the free will away from her. Soon after that, rumors come up that an Esper was seen in the coal mine city of Narshe. So mad Kefka, high-ranked subordinate of Emperor Gestahl sends two of his soldiers and the slaved girl to find out what's the truth behind the story... and to capture Narshe as well.

The story of Final Fantasy VI is stunningly good worked out and absolutely one of a kind, especially the story twist in the second half of the game is a milestone only some other few RPGs of that time were able to keep up with.

The graphics, however are not so special, sadly enough. As seen in Chrono Trigger one year later as well as here and there in Final Fantasy VI, it is almost clear that the biggest problem of the graphics is the limited space of the cartridge. They should at least have used a 32 MBit cartridge - but, as we all know, the fight for ROM space was one reason why Square left Nintendo. Leaving all the limits aside, there are still decent backgrounds, nice sprites with lots of animations and various magic effects. On the PlayStation version of the game, you'll additionally have to face several framedrops and slowdowns here and there.

The music leaves no reason to worry. Nobuo Uematsu probably did one of his best scores, the sound quality is also very good - there are only a few soundtracks on the old SNES console where the instruments sound that natural. Compositions like "Maria and Draco" or "Dancing Mad" have become so successful, that they are being played by famous orchestras on concerts around the world now. This is no surprise since there's a 20-minute opera scene within the game included where you have to complete lyrics and guide your character through an opera performance.

Gameplay is classical Final Fantasy style. You have your ATB, where you can only send commands after your ATB gauge has been filled, you have your twisted magic system (this time called Esper system, allowing people to learn certain magic with certain Espers equipped), you have your zillions of status malfunctions and harsh standard enemies that are weaker than most bosses. Please don't get me wrong, this is not meant in a negative way - this is just how classical Final Fantasies worked, and this one works too the way it does. Noticeable about the game is the immense cast of Characters (more than 10) which you can change freely, you can take up to four characters into battle. Especially later on, you can virtually beat the game with a combination of equipment, status-changing Relics and Espers - over 20 attacks per turn are not impossible.

Some call Final Fantasy VI the best Final Fantasy. Although this game has some optical problems, I completely agree with them. The ideas included in the story, the plot twists, characters and the overall feeling of the game is so good, this balanced quality was hardly reached in later Final Fantasies in my opinion. And I'm the last person to cling on the saying "Everything was better in former times." Hoever, from today's point of view, and considering other RPGs of that time, I can't objectively grant more than 82% (to all the fanboys - this is still a very good rating for a old game!).