Waiting for bars to fill 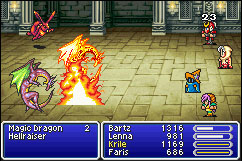 Since Final Fantasy is one of the most famous RPG series, its battle system, used for the main series games from 4 - 9 and 13 is also pretty well known in the world of RPG gamers. This battle system was first introduced in 1991 with the release of Final Fantasy IV. In this system, the combat is not fought in turns of party members and enemies, but rather every combatant has their own action gauge (which is not visible for enemies and was not visible at all in Final Fantasy IV), and as soon as the action gauge is filled, a command can be executed.

These commands are pretty standard RPG action - players can select their characters to attack, heal, use items or use cretain skills. For characters with a better agility stat, the action bar fills quicker than for others.

When more than one characters have their ATB bar filled, players can switch between all "ready" characters. In earlier Final Fantasy game, this was done upon pressing a button, and in Chrono Trigger, the action menus of characters are placed next to each other so that players can easyily assign actions to their characters.

It then takes some time until the action is actually performed, but unlike Grandia, once selected moves cannot be cancelled. However, if characters choose a move, spell or skill that takes some time, they can be killed during that waiting period.

The fight itself is absolutely asynchronous. On its most dynamic setting, monsters can even attack player's characters while they are browsing menus or selecting characters. ATB can be fun, but sometimes strategy is replaced by panic and nervous scrolling through lists while one is being constantly under pressure from enemies.

However, ATB always offers a "wait" setting that stops all character progress while item, spell or skill menus are open.

This battle system is often associated with "the good old days" of RPGs and was the first type of combat many gamers gained experience with (often enuogh along with Final Fantasy VII), so it is sometimes brought back in retro games such as Lost Spehar.