Square Enix - Tested on the Nintendo Switch in 2020

When I first ventured into the vast lands of the internet back in 1998, there were two games that especially sparked the interest of young seventeen year old me: Chrono Trigger and Seiken Densetsu 3. With the power of worldwide information on my PC, I was able to find out what great RPGs we missed in the west that even weren't widely covered in popular gaming magazines around here. And thanks to Neil Corlett and his team, I was able to play and enjoy the original game in 1999.

Fast forward to twenty years later, and Square Enix announced an official translation as part of the "Collection of Mana", where the first three "Mana" games were packed together. There, the name "Trials of Mana" was officially confirmed. I looked forward to playing the game ever since. As soon as the demo of this game had been released, I played it and wrote a little preview article about the game. 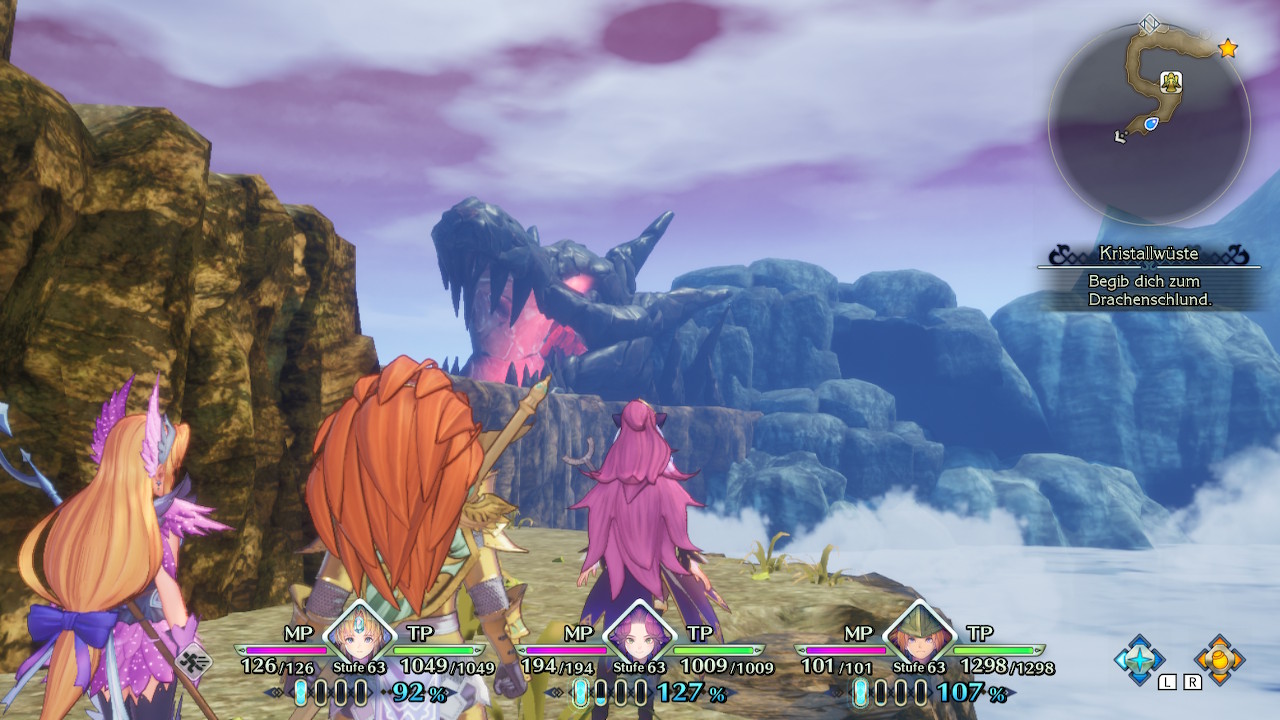 So what is Trials of Mana in 2020? To dive into this topic, we need to get back in history a bit. The original game, formerly known as Seiken Densetsu 3, was one of the last games Square Enix made for the aging Super Famicom (Nintendo) console. Before Square Enix moved to the PlayStation and Sony in the late 90s, they had three main RPG series going on: Final Fantasy as their masterpieces and traditional RPGs with their trusty ATB battle systems, the rather unconventional SaGa games which tried out some different RPG concepts, and Seiken as their Action RPG series. Of course, there was one or the other individual RPG being released (like the aforementioned Chrono Trigger), but that was about that.

However, Seiken Densetsu 3 was not really an action game, as the action itself was very slow paced and interrupted by frequent menu access - it was more like a traditional RPG with a few more action elements, but it was far away from real action RPGs like Zelda or Illusion of Time (Gaia). This new game, on the other hand, is a full fledged action RPG.

Outside of towns, players take control of one out of six main heroes. Every character has unique abilities, and plays a bit differently. There are several melee-focused characters (Duran, Riesz, Hawkeye, Kevin) and two magic users (Charlotte, Angela). There is an easy combo system available, characters can run, jump and evade. It's a dynamic, fast system where players can and should switch between characters so that they can play with the character that fits the situation best. For instance, against heavy armored enemies, it is wise to switch over to Duran (if he is in the party), while groups of enemies can be defeated with magic wiedlding Angela best. 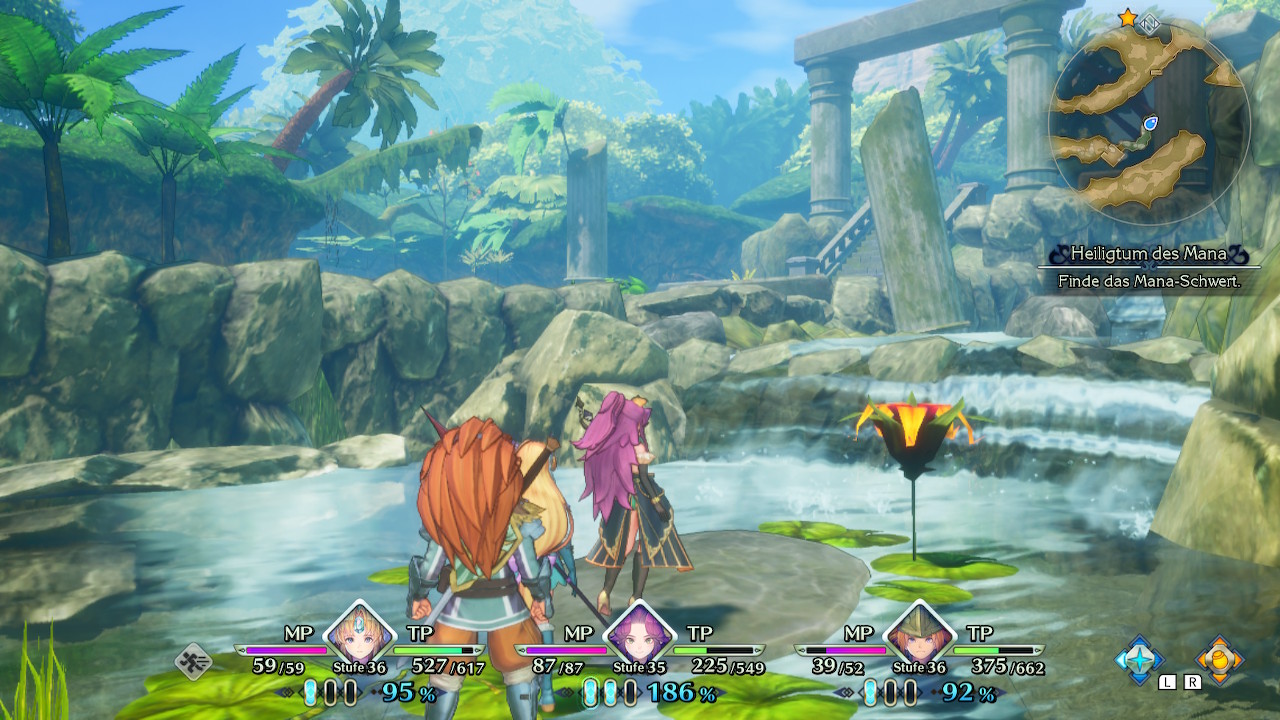 Characters can be further enhanced to fit one's playstile better later in the game as Trials of Mana offers to change the class and abilities two times during the course of the game (check our class change guide for details). There, some attributes can be altered like focusing on supportive or destructive magic. The first class change is free at level 18, the second one has to be conducted at level 3 with an item (that can be somewhat hard to find if you want to choose a specific class). 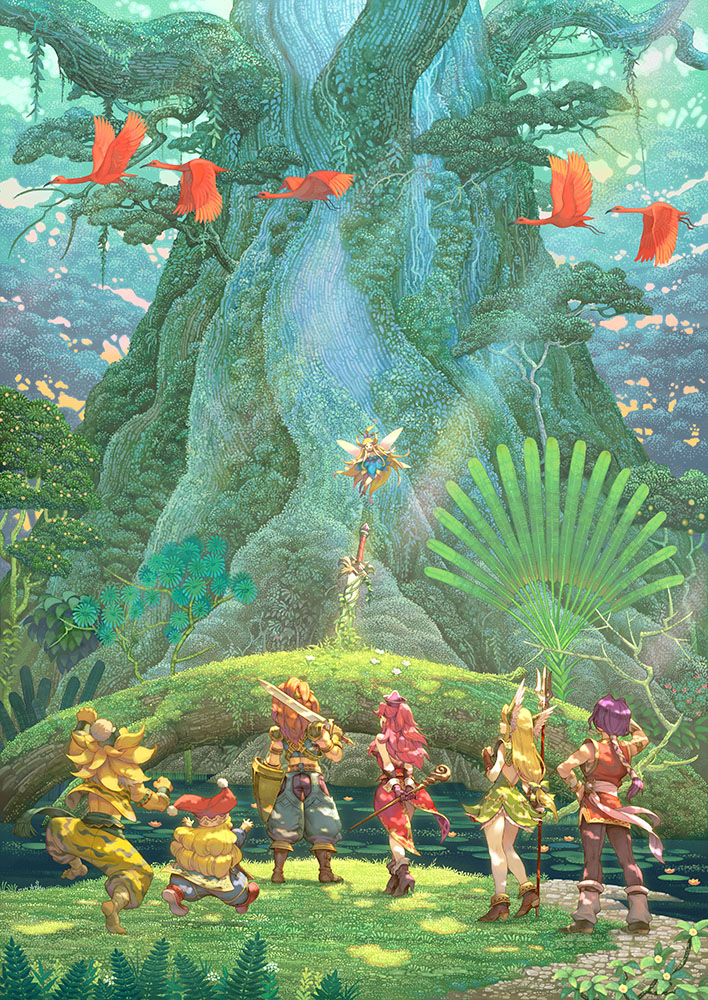 Outside of battle, players can visit towns and cities, talk to the inhabitants of the world, purchase items, armor and weapons. In the cities, the party splits up and the player's designated main character can talk to the others. These conversations remain superficial, though, and they are not nearly as deep as the "private actions" found in Star Ocean, for instance. There is not much else to do, this game has no huge load of sidequests available or other mini games, aside of finding cactus things around the world.

On the visual side, the game tries to mimic the style of the original game, which was completely in 2D, of course. While the general atomsphere remains the same, the level of detail the original game provided cannot be recreated in the 3D engine - no matter which version you choose, some polygons remain a bit rough around the edges and some textures incredibly blurry. Also, on the Nintendo Switch version, the engine tries to do its best to keep 30 FPS, but sometimes that framerate drops, the game gets blurry as the resolution is decreased and anti-aliasing is nowhere to be seen. 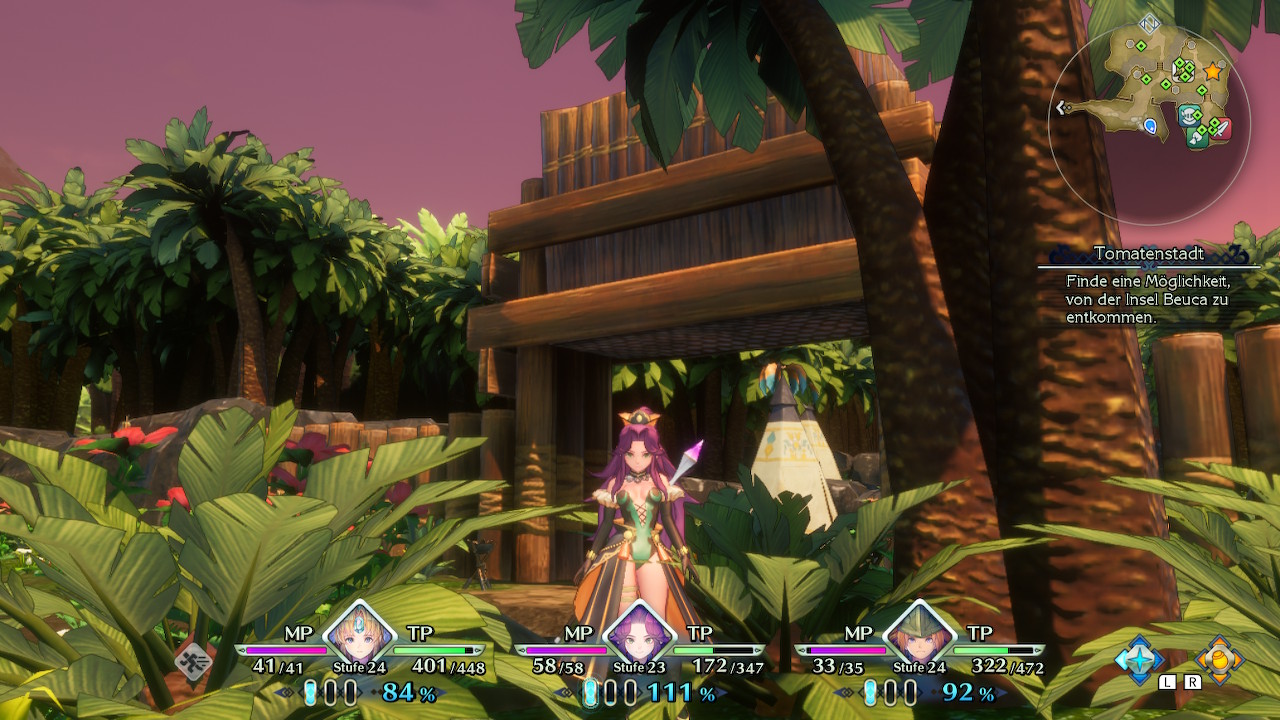 The music is mostly like the original. It has been rerecorded with real instruments, but there have been no changes in the style of the soundtrack at all. Sometimes, an additional chord is being played in the background, but that's that. It is a score very faithful to the original. If players choose to, they can switch back to the original soundtrack, if they want. All cutscenes are voiced, the cast of the main crew does their job very well, but some NPCs of lesser importance sometimes are poorly voiced.

I was very curious how this game would turn out to be. It is a remake that has been made with love and the original in mind, and mostly, the team behind this game succeed. It carries over the same atmosphere the original had, the music is just astonishing and gameplay mostly fun. Some changes in the formula can be frustrating (like jumping), and on the visual side, there are some really poorly made areas, while others are just gorgeous to look at.

Trials of Mana remake is a game I can wholeheartedly recommend, but it is noticeable that this game did not receive any AAA treatment - some polishing would have been great. It's a nice enough game to spend some enjoyable hours with, though.

You are here: main page / reviews / trials of mana (remake)