Phantasy Star IV: The End of the Millennium

This text was the basis for our Death and RPGs section - however, since this article was first published in the "moments" section, it should remain here.

And indeed, in the first half of the game, she actually lead the squad that tried to find out whats happening on the planet of Motavia and why there monsters started to appear everywhere. Young Chaz, her partner, seemed immature and unexperienced. That was, until they encountered an evil magician called Zio.

Zio is too strong for the group and manages to beat them. Just as he tried to kill Chaz, Alys protects him, getting severely wounded herself. She was then carried back to a bed and the group searched for ways to help treat her devastating wounds. 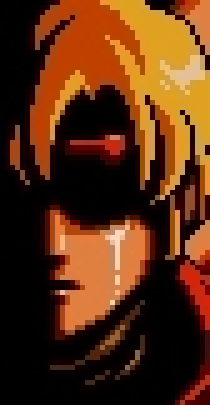 But in the end, it was too late. When the heroes come back to her with a remedy, Alys passed away. Especially Chaz was in shock since she was some kind of mother figure for him. Chaz was left with no one.

Phantasy Star IV presents its story with cut scene images (of which, by the way, we have every one) that sometimes have the vibe of a comic or even a movie. They are nicely drawn, and so the story of Alys' death is also presented in these images. When the characters visit her grave and talk about her in the night, the game gets incredibly intense. Especially since Alys was part of the party for many hours up to this point.

In 1995, this was a moment only rarely seen in games up until that point, since story-driven games with videos and speech weren't so widely spread during that time, some games even had to cut text because memory restrictions were so severe. Along with Final Fantasy VI, this was one of the first intense moments in gaming.

If you really want to spoil yourself, take a look at the Phantasy Star images linked above. You might even be able to follow the story of the game, even if you haven't played it. The game offers some more nice and intense moments, but I personally think that Alys' death is about the pinnacle this game has to offer, story-wise. Aside of that, it's sometimes pretty hard and unforgiving in its battles.

You are here: main page / coverage / those moments / phantasy star 4