Many consider japanese RPGs from the late 1990s to be the pinnacle of the genre. This is what I often mentioned and also covered in the recommendations section. There are various approaches that companies tried to benefit from this generally accepted opinion (which I don't completely share since I think that there are lots of great RPGs and JRPGs in every generation). Square Enix tried some in the past years - they remade Secret of Mana, they released I am Setsuna and Lost Sphear. These games all tried to at least have some modern visuals, but this time, Square Enix did it differently.

Octopath Traveler utilizes a look that looks like we remember the games back then. Hand drawn sprites, blocky houses, terrace mountains. The visuals, however, are done in 3D with some intense effects, blur in the back and color bezels around the screen. Aside from the technology behind this, the visuals are pretty clever, because it makes you feel like you're playing an old game without the limitations of the old games. Still, at some points the developers slacked. The rooflines of houses are sharp, so are sails from ships and the likes. It would have been looked even closer to how games looked back then if the developers paid a little more attention to detail in these matters. 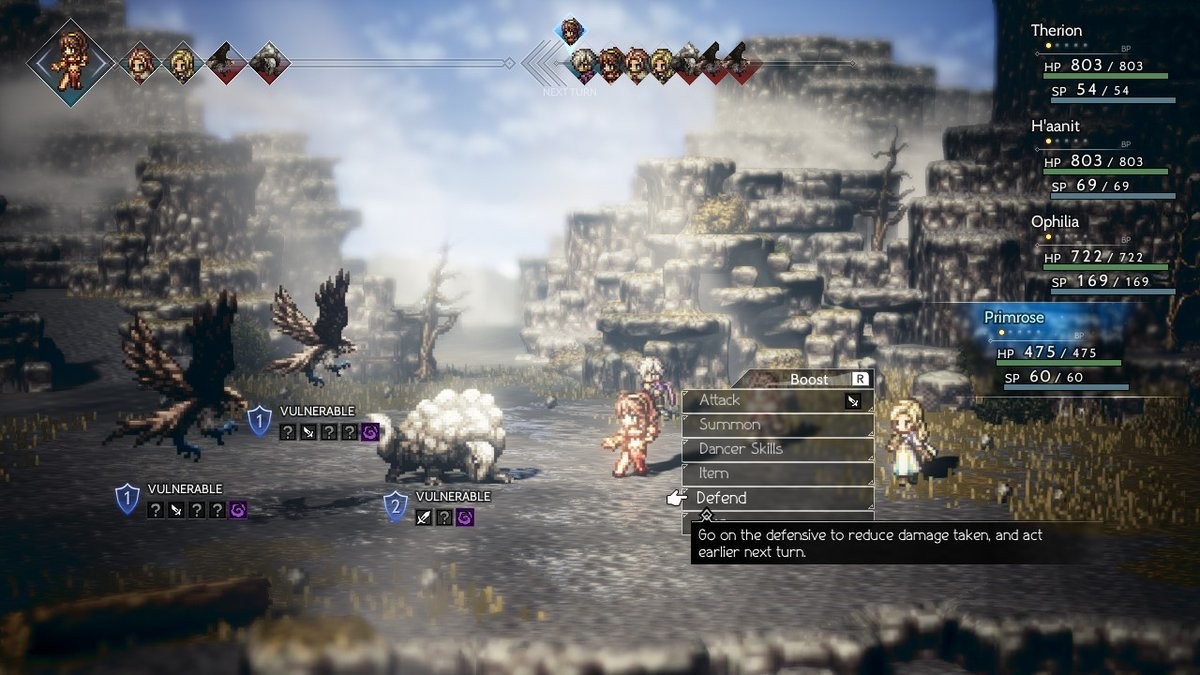 Still, the game does a pretty good job in mimicking the past. Interestingly though, you can't really pinpoint which past. Sometimes Octopath reminds of 16 bit games like Secret of Mana or Final Fantasy VI, sometimes it has more the vibe of games like SaGa Frontier or Vagrant Story. The soundtrack sometimes reminds of Nobuo Uematsu compositions, sometimes it's a tad Hiroki Kikuta, but mostly it's original and has some damn good melodies.

The story and general direction of the game again reminds me of SaGa Frontier. Playable are eight characters (of whom the first letters of their names form the word O.C.T.O.P.A.T.H). Each of them has a different objective. Some are light hearted (Tress, the merchant wants to travel the world and train her trading skills), some are bleak and serious (Primrose, whose father was killed when she was a child and now has to work as a dancer and maybe prostitute to find the whereabouts of her dad's killers). Some are well written, some rather superficial. The storys are not intertwined at all during regular gameplay, but with an optional chapter, you can find out at least a bit how everything's sticking togeher. 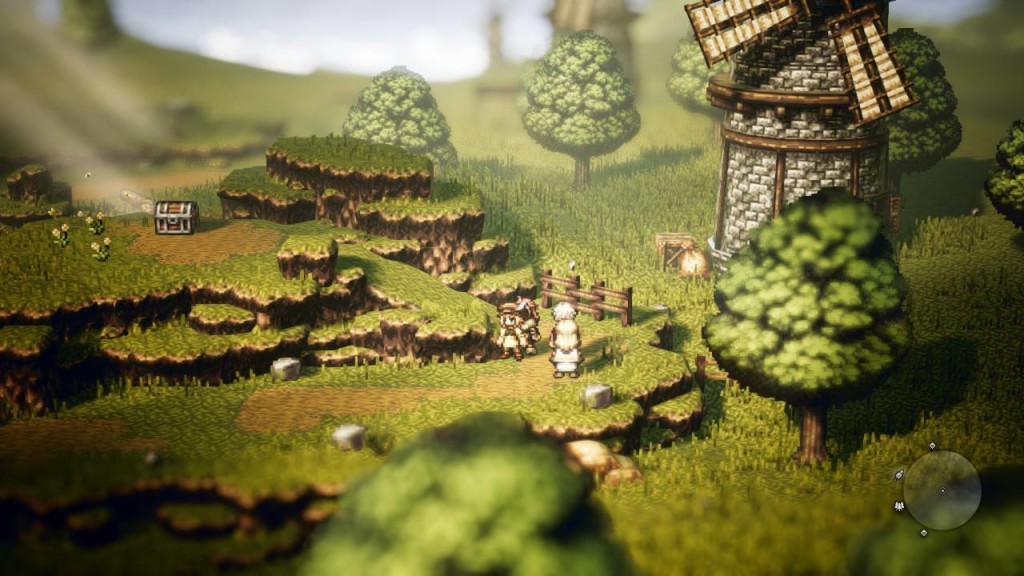 Gameplay is classic round based gameplay with a little twist; players can break an enemy and disable them for a round. It's a nice detail that makes the gameplay not overly complicated. There is a simple job system that gets its job (heh) done. Really, the gameplay is pretty balanced (for the most part) and works just well.

The world itself is vast and nice to travel. Players can walk from cities through roads and landscapes, can find dungeons or go to the story dungeons. If one hasn't decided to activate a story, though, some areas cannot be accessed.

The variety of areas covers what we know and love from older RPGs. Dense forests, deserts, hills, ocean shore, winter lands and so on. There are many towns around the world, and many of those have their own identity. Within the towns, there are lots of NPCs that give the players sidequests with good rewards. There is lots of other interaction possible with these NPCs. Players can challenge them to a duel, seduce them, steal from them or trade items. 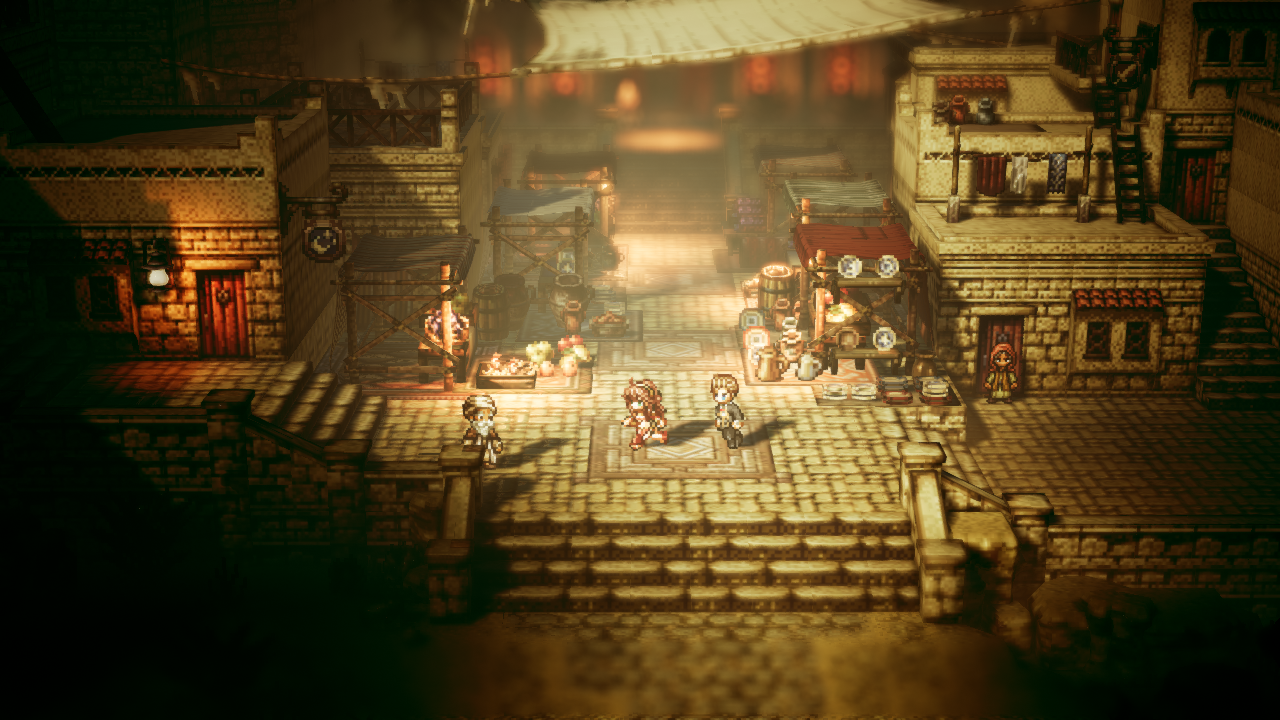 Octopath Traveler is pretty much a grindfest. Every chapter of a character has a suggested minimum level before you should enter these chapters. There are 32 chapters in total (eight characters á 4 chapters), and before many chapters, you have to level up. Especially since there are only four out of eight characters within the entourage and the other four don't level along when they're not in the active party.

When I played the game, I really liked it. I have fond memories of the time I played the game, and maybe this is why I gave it a rating that deserves the "rpg-o-mania classic" plaque. But as I thought about it afterwards, I realized that my good time as I progressed through Octopath Traveler was more because I especially enjoyed life as a whole back then in the summer of 2018 and not especially because of the game.

And I don't feel any need of playing it again, so I think it's not really a "classic" and I therefore deducted 5% of the rating.

Only rarely was I so hooked and un-hooked to a game at the same time. Octopath Traveler has an interesting concept, lots of places to see, and lots of monsters to beat. I played it for more than eighty hours since it was fun to fight the monsters and see the places around the world, but on the same time, the game sometimes lacked heart and depth within the characters' stories.

I played it every day and looked what I can do to get the best experience out of it, but my heart was never attached to the characters as I was in Xenoblade Chronicles 2. It would have been so much better if the stories were more intertwined, where a decision in story A modified the outcome of story B.

Still, the game is great and can be enjoyed every minute you play it.