This is one of the least defined series of games that I know of. Quintet, already a kind of mysterious team that never published lots of information about themselves and which even suddenly disappeared, never made these games an "official" series. So the whole "Soul" or "Gaia" series is just something that fans and press came up with, but there are so many similarities between these games, that it's just obvious that they share the same spirit. 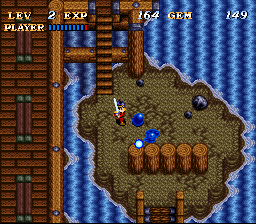 This was the third game that Quintent developed and it was released under the label of Enix in 1992 in Japan and North America and 1994 in Europe. This is your classical action adventure game where a character explores dungeons and kills monsters. Ther character is nameless and portrayed as the chosen one by the "Master" who is destined to bring back life to the world, after an evil king sold all living creatures to the darkness.

The visuals are a mixture of later Quintet games and Zelda: A Link to the Past. Dungeon crawling is a main aspect in this game, and beating hordes of monsters just as well. The soundtrack is more upbeat, and the stroy still a bit shallow, but it was a good start that was received well by both gamers and press alike. 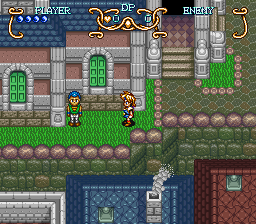 This is about the most linear game of the bunch. Illusion of Time follows a story of youg Will and his friends trying to avoid a huge catastrophe from happening. The story covers lots of more serious topics, like love, loss, death and even spiritual hints of reincarnation. The original game is also pretty sinister, since it includes cannibal people eating their own tribespeople.

The soundtrack is more orchestral this time, and the visuals are pretty colorful and diverse. The game itself is rather stripped down compared to other games of that time, with no experience points or even money to spend on. Players control only Will or one of his "variants", a strong knight or a light / liquid type creature with various strenghts and weaknesses. If Will defeats all enemies of an area, he gains a special power up that extens his attack, defense or hit points.

The game also blocks backtracking at certain points - it's a game focused solely on story and a barebone gameplay, but fun nonetheless. 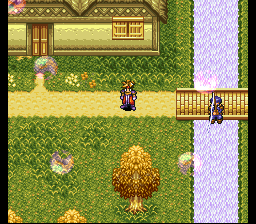 The late entry into the original series and by no doubt the best one. Terranigma focuses more on traditional gameplay compared to its direct predecessor. There is money to collect, things to buy, experience points to gather and so on. The overworld is also free to roam and there are even some city building tasks later on in the game. This time, the main hero is Ark, a young man that is quite the troublemaker. One day, the troubles he causes lead to a catastrophe in his home town which he has to undo.

The music is impressive in this game, as well as visuals. The gameplay is solid, although some people complain about unresponsive controls - a thing I personally cannot confirm, but I think it has to be mentioned. Storytelling is absolutely intense with some of the best moments (Spoiler!) in gaming.

Sadly, this game was never officially released in North America. But it was an impressive christmas experience for many European gamers in christmas 1996. 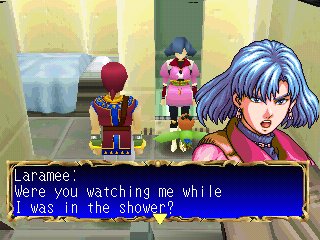 This game was not released under the label "Enix" anymore but rather "Shade", which was Quintet's own label in Japan. The game was done completely in 3D, which had some awkward visuals at times (no faces), but kept a steady framerate all the time. The story was again about a hero who has to restore a land that has been mostly submerged by water.

The music is pretty good, but not as outstanding as Terranigma was - Granstream Saga does not use a CD soundtrack but rather relies on the soundchip of the PlayStation. The gameplay focuses on one-on-one battles.

The game was received with mixed ratings and was not as successful as its predecessors, neither by journalists nor gamers. Our friend Binary Scroll tried to find the hidden gem that he hoped the game to be, but the dungeons and the combat were just too annoying.

So is this game a part of the Soul / Gaia series? I don't know. Some sources state it is, some don't. Since it bears some similarities to the other games in terms of story and setting, I added it - with a little horizontal rule that just separates it a little from the famous SNES games.