So, here's something I guess you might have not expected in an article here on rpg-o-mania. The whole description of the battle system starts with the depiction of a car, and a strange one nevertheless. As some of you might know, aside of being a huge computer rpg fan, I'm also quite the car geek, but I think after reading this article, you'll get the analogy I'm trying to display with the image of this little modified Citroen 2CV.

Ni No Kuni is a game that tries to put together so many game elements in its combat, that it sometimes is on the verge of unplayability, but somehow struggles to keep working.

So basically, the combat is a mixture between your typical Tales of / Star Ocean game, mixed with Pokémon. The basic combat is done in real time, monsters run around freely on a separate battle screen, attack the player controlled character or one of two companions. On the bottom of the screen is a menu where players can choose a specific action.

Said action requires some time to perform or some cooldown to be performed again. Actions can be performed by either the players characters or a companion that said character has befriended. It's quite like Pokémon in that regard, just with the difference that not only the beasts can take part in the battles, but also the trainers.

Unlike Pokémon, however, battles are fought not in a turn based manner but rather in real time. This means that navigation through menus has to be done in time, while enemies attack the party members. Sometimes, certain moves have to be done (like defending) while enemies or bosses are preparing for some special attacks, and here the whole battle system becomes messy.

While there is a short time window where the required moves can be selected, players need to cancel the current action, change the menu to "defend" (or another appropriate action) and confirm the selection. If the creature fighting at the moment does not have "defend", then the player character has to be changed - all in time.

Sometimes, these attacks can be devastating and easily wipe out a party. Of course, consumption of resurrection and healing items also is time consuming, which makes it hard to heal a whole party from a devastating blow. If that's not all complex and annoying enough, then the KI also is pretty stupid and can't be generally set to a defined behaviour like in some Mana games. Basically, players have to remove all moves from partners' monsters except healing moves to have somewhat usable partners. 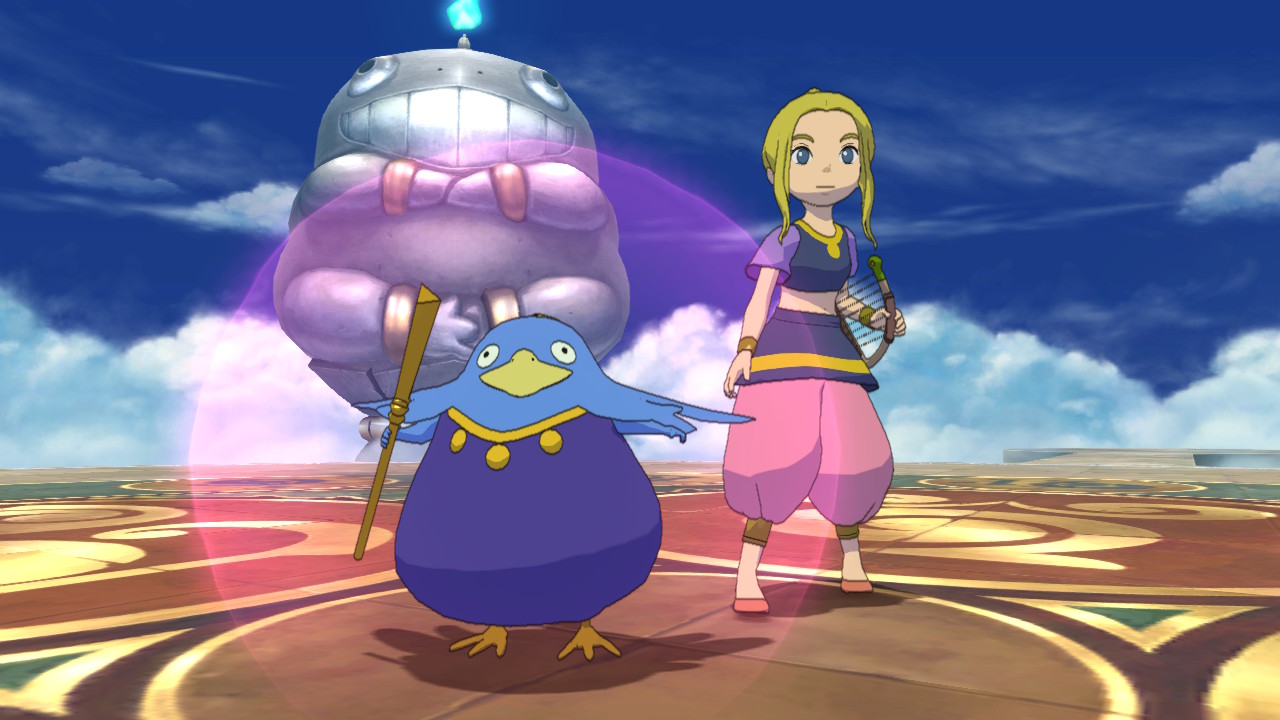 But how does it work, then? This surely sounds like a very complicated mess, right? Well, Level 5 somehow managed to make it just barely workable. Battles are usually not that difficult, the EXP outcome is so big that grinding is not often required, difficulty can be set to easy at all times and there are even some monsters that grant players absurd amount of EXP to level up multiple times at once.

In the end, however, these measures are all just lots of patches and workarounds to make something that's been messed up playable.