The game reviewed here was more than twenty years old at the time of the review. However, it sparked a community that is still celebrating this series, drawing fanart of the game. Discussions and theories are still going strong, and no matter the social network of your choice, the Suikoden community usually thinks that Suikoden II is one of the best games ever released.

This review will take a look into the phenomenon that Suikoden II is. It is based on our Suikoden II vintage review, written by Kyle Swiston back in 2001, but it has been reworked even more than the original was. 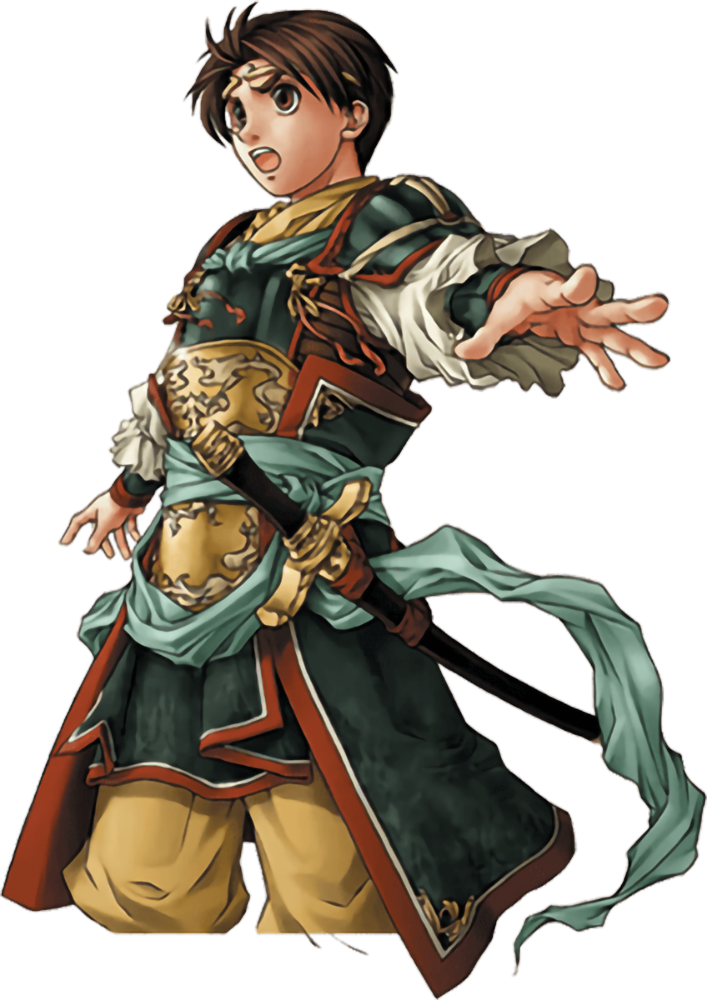 Suikoden II is the successor to Suikoden, a 2D turn-based RPG initially released in 1995. The second game is mostly more of the same compared to its predecessor. Battles are fought in a turn-based manner, with parties consisting of up to six characters. Enemies and party members are aligned in two rows, and depending on the class of the character, they can either attack the front row or any row of the enemy party.

Aside of battles, the game is highly focused on telling a somewhat linear story. Aside of the story, there are about 120 characters (where 108 are very important to the outcome of the game) to add to the player's roster of potential party members that can be recruited in any order, aside from some characters cruicial for the story.

Sometimes, the game switches over to large scale tactical battles, and sometimes there is a rock-paper-scissor one-on-one battle here and there. There are towns to traverse, and the huge roster of companions is placed in a growing castle that also offers some minigames.

So, this should cover some of the basics, let's get into more detail, shall we?

By far, this would be the games strong point. Featuring over 108 playable characters, it is understandable that most of these were not fleshed out. However, the 20 or 30 key characters are both likable as well as being believable. By the end of the game, often you will find themselves very attached to the characters or the party they spent most of the time with. That is what makes it so damn dramatic when something unexpected happens to one of them. The antagonists in this story are also very well done. All too often, a game sets up the main antagonist as a power-hungry fiend, or a psychotic murderer. That is not so with Suikoden 2. The game has some interesting surprising moments as to how it sets up the opposing parties. The game tries to give all of the antagonists believable reasons why the are how they are. 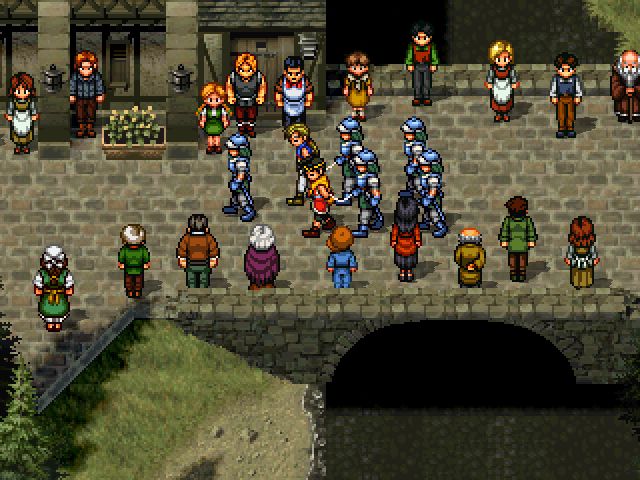 Besides character development, this is a game that excels at dishing up the most unexpected events you could think of. Plot twists galore, sometimes it even plays like a suspense movie. The game is one of the very early story driven RPGs that tries to have a good pacing, where more peaceful moments or moments where players can travel the world in search for new recruits are followed by intense story moments where there is some pressure on the players to move on.

The graphics are totally two dimensional sprites, only backgrounds in battles are three-dimensional. Given the technical limitations of the original PlayStation, this turned out to be a wise decision, as the game still has some nice and pretty moments in its hand drawn pixel glory. The Character portraits for the most part never change (unlike Grandia, for instance). This can be annoying at times, since characters who are mad or in shock often have the same old happy go lucky expression in their character portrait. It would have been nice to have more variety. With the spells are well done without being overly long, the same can't be said about the few cg sequences throughout the game. They are horrible, strictly first generation PlayStation 1 quality. They should have went the Lunar route and offered anime cut scenes instead.

We have some screenshots from the game played on a PS3, if you want to see what the game looks like - be aware that there are some spoilers here - and that the capture quality isn't the best as I shot those screens with my phone. 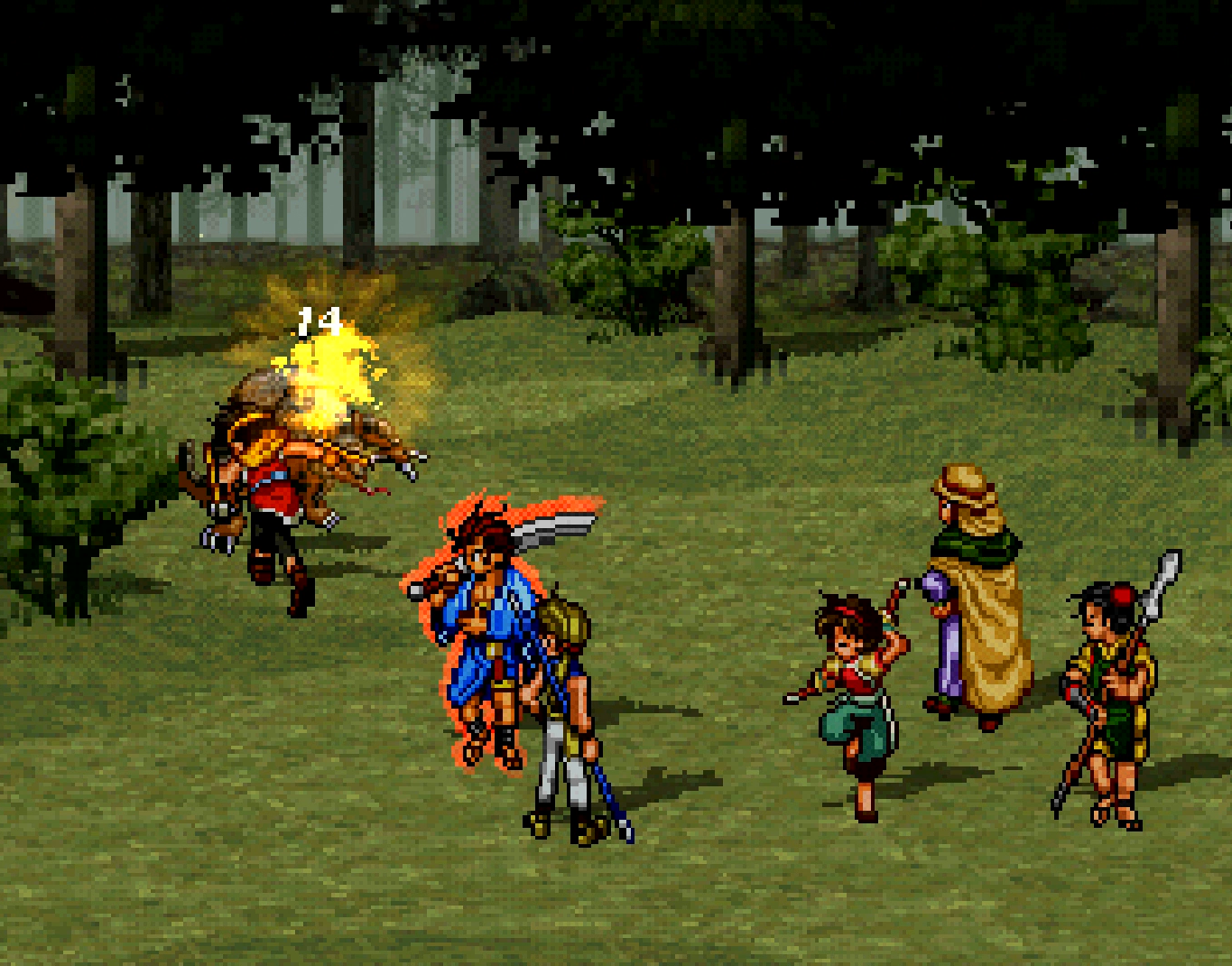 The music tries to follow the part of its predecessor, with a wider selection of tracks. You can hear so many cultural influences in it from Celtic to Japanese. The sound quality itself is not as good as in the first Suikoden, as it uses a different technology. Some of the compositions are of questionable quality as they tend to sound overly squeaky. The sound effects on the other hand are sufficient but nothing extraordinary.

The combat system simple, and more to the easy side as RPGs go. The magic system is easy to use and has an interesting approach, with many subtle details (like ability to sequence certain spell to occur simultaneously). Magic is contained within "runes" that need to be applied to users. There are four levels of power, whereas the number of invocations of each power decreases for each level. Still, a common boss strategy in Suikoden II is to spam the strongest spells first, which should get rid of any foe easily. Combat itself is just as straight forward. Pick your target and press attack. None of this combo memorizing or timed hits that are becoming more and more common now a days. You can also combine the turns of certain characters in order to do a more powerful Unite Attack. 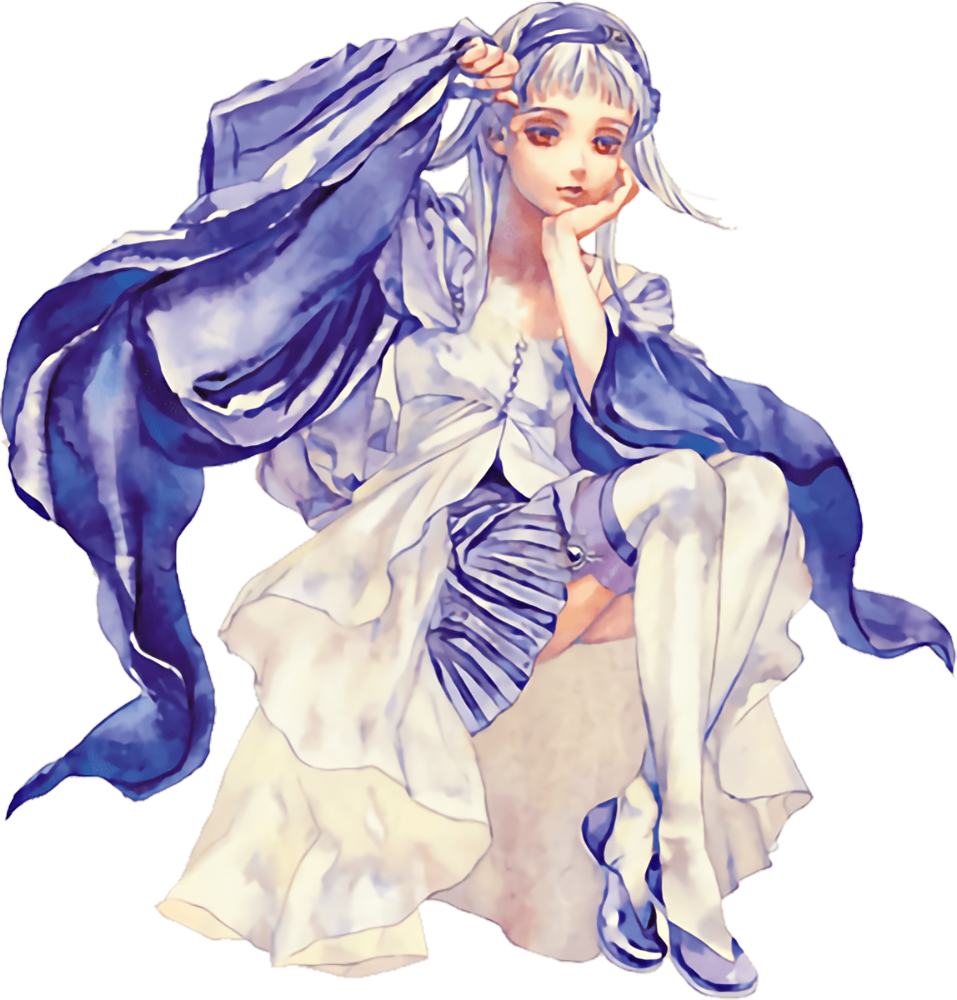 Suikoden II employs a convenient one-hand control scheme, where you can control the whole game with your left hand. In that case, the character is controlled with the control pad, confirmation is L1, cancel L2 and menu is select. Especially in modern times, battles can be fought while browsing websites on your mobile phone.

The hero can only move in four directions in towns and dungeons. This can be annoying at times when you would much prefer cutting diagonally across longer distances. I would have also liked to see analog support. The whole control pad won't work if analog is activated.

Gameplay wise, Suikoden II does not reinvent the wheel. The designers put together things that worked in the first game, made some things more convenient (like equipping, character selection and formation) and put everything together.

The biggest innovation that sparked the fandom this game still has today is the focus on each character's fate and the focus on telling a warm hearted story where almost every character is likeable or despicable because of reasons well worked out. This game offers some of the most cruelsome, warm hearted, frightening and somber moments in gaming - even today, which is 2020 at the moment.

There is a variety of optional mini games throughout this title. The main one is in the form of a surprisingly addicting cook off game. Every time you beat the challenging chef, you get his secret recipe. There is also a dice game, a fishing game, and a rock climbing game that you can play in between the actual storyline if you ever find yourself getting depressed at a certain event. Also, the challenge of getting all 108+ characters (actually it is more like about 120) will guarantee at least another play through. The save file of Suikoden can be loaded upon start, which allows for another special story scene and an additional recruitable character.

Be careful of PlayStation 1 versions of Suikoden II. The US NTSC version lacks some songs, the PAL versions are horribly translated and suffer a lot from PAL squeezing.

Every single person that I have introduced this game to has fallen in love with it. The game, along with its successor Suikoden III is the basis of all of the Suikoden fandom that's still going strong even today. Some of the original games' creators even decided to work on a spiritual successor of the Suikoden games. Suikoden II is one of the two main pillars that build the foundation of the love this series still receives.

Suikoden II has almost no flaws. The weakest points of this game are bland at best, and the strong aspects are stronger than seen in any other RPG. Only rarely since then there have been RPGs with a stronger story or a better pacing. And never have I seen such a perfect, likeable mixture of every ingredient. If you show the slightest interest in turn based 2D RPGs, you won't find a better game than this.