Game Arts - Tested on the Playstation in 2005

1997 was a great year for the japanese RPG freaks. At the beginning of the year, Final Fantasy VII was released for the PS1 and later on, towards the end of the year, Grandia came up for Segas Saturn. The game received a good rating in the popular japanese Famitsu (32/40), but was not able to come up with the popularity of Square's first Playstation RPG. Still, the game caught attention. After the preview "Prelude" Disc and the official release, western gamers awaited eagerly the announcement of a western release date.

... but that never came. The whole year 1998 passed, as did half of 1999. Then, in June 1999, a PlayStation version of Grandia was released in Japan and soon after, the US-release was confirmed as well. Not the staff of Working Designs, who brought the Game Arts games to America up to that date was translating this game, it was Sony who published Grandia in America on the 26th October. Later on, the game was even released in Europe by Ubisoft. So finally, western RPG freaks were able to play this game without language barriers.

The story starts with young Justin, a boy aged 14 playing with his friend Sue in some kind of childish duel against his local "enemy". Justin is a scallywag with lots of silly ideas, longing to experience adventures such as the ones his late father told him about. Thanks to a museum curator who recognizes the potential within Justin, he and Sue get the opportunity to investigate old ruins near their hometown, Parm. As they process through the ruins, Justin's memorial of this father, a little stone called "spirit stone" begins to glow and opens up the path towards an enourmos adventure which is going to change not only the world, but turn the boy Justin into a grown-up man as well. 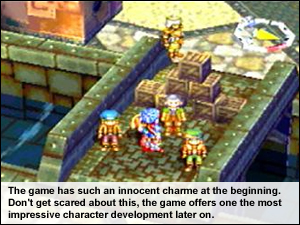 Although the adventure itself and the story are already very good, character development is even more impressive. There is rarely any other RPG that shows how the characters turn from carefree adolescents to responsilbe adults as the story evolves, getting more and more serious. On top of that, Game Arts managed to make the characters all quite natural, there's rarely any badass in your party you could dislike.

Having such a good and fine-tuned story, Grandia already scores at one of the most important points of japanese RPGs. Still, the main innovation and by far strongest point of Grandia was its completely new battle system. The system is a mixture of Square's Active Time Battle and classical round based battle systems with a very interesting addition: Instead of just beating the enemy, you also have to manage them so that the damage you're going to take is not fatal. How does that work? Your characters and the enemies are lined up on a gauge that's separated in three sections: "wait", "command" and "act". The status of the characters move from "wait" to "command", and after a command was set, it takes more or less times until the command is executed depending on the action chosen. For example, a simple two-hit-combo is going to be executed immediately while your most powerful uber-spell takes some time to charge. While any fighter on the map, both enemies and party are charging for more powerful attack, they can be kicked out of the charging process ("cancel effect") with another strong, but faster attack. This opens up a wide variety of strategical opportunities. Along with the fact that characters actually move on the battlefield (similar to Lunar), Grandia's battle system is one of the most strategical ones in the vast world of japanese RPGs. This combat system was such a great innovation that it was almost untouched even in Grandia 2 and 3.

The soundtrack of the game was done by the same person who always did Game Arts soundtracks in those days, Noriyuki Iwadare. Along with the soundtrack of Lunar 2: Eternal Blue and Grandia 2, his Grandia soundtrack is his masterpiece. The compositions never lack the soul of a good song and on top of that, the sound quality of Grandia is top notch. If you've got a good sound equipment, Grandia is an impressive experience.

Grandia really got a high ranking for such an old, outdated game. Of course there are always people who do not like the colorful graphics or the innocent atmosphere that's dominating the game in the first hours, but even those have to admit that this is just a matter of taste. Almost everything you could dislike about Grandia is just a matter of taste, the game has almost no drawbacks seen from a impartial point of view. At least unless you're not playing the german or french version.