Sega / Climax - tested on the Sega Mega Drive in 2017 and many many times before.

The game to take on Zelda

Oh I still remember how we, as a small group of video game enthusiast kids in the early 90s waited for this game to be released. We just had finished The Legend of Zelda - A Link to the Past, and were eagerly awaiting the game that was sold us by the press as the "Zelda killer" on the Sega Mega Drive (Genesis). The news also stated that this game would be the first on the Mega Drive to be completely translated into German - something we started to like after Zelda 3 had been released with localized screen text here. 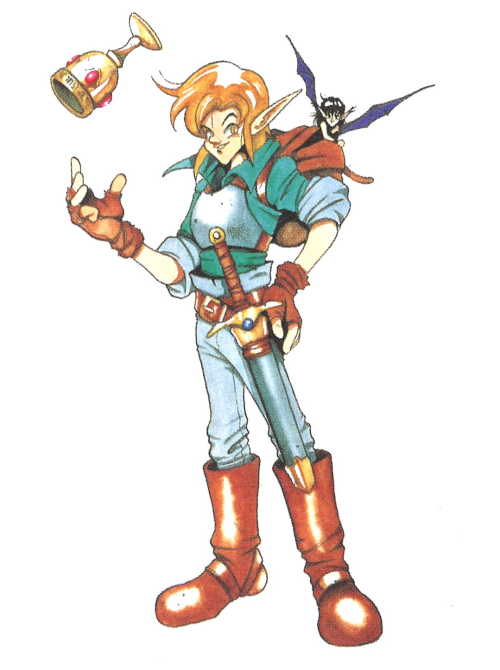 The game which was eventually shipped (a year later than anticipated) is indeed an action adventure game like Zelda, with very little to no RPG elements, but many from aforementioned game. The dungeons are complex and full of puzzles, the overworld is vast and upgrades come in the form of new equipment and hearts that can be found and purchased. The gameplay is action oriented, and players take on the role of Nigel, an adventurer who listened to a fairy he saved and went on to search for Treasure on a remote island.

Nigel, together with his fairy friend Friday, arrived on the island without knowing where to look for the treasure she'd promised him. As he traversed the island, he stumbled into a story of an old evil, corrupt local politicians and the woes of the people who inhabitant the island.

The game was developed by Climax Entertainment, the first time without "Sonic! Software Planning" - and even if the game still bears some resemblence to earlier "Shining" games, it was the first game by the company whose employees would eventually found "Matrix Software" and develop "Alundra". It's all a bit messy, but it's safe to say that Landstalker is a cousin of the early "Shining" games. Especially the soundtrack, composed by Motoaki Takenouchi, bears a striking resemblence to Shining Force II.

The unique selling point of Landstalker is its isometric perspective. In the day before 3D consoles, this perspective allowed for a more detailed look of the whole scenario. However, in the case of Landstalker, the detailed world came with the concession that players had to move with diagonal input only - something that was manageable on the Sega Mega Drive's Control pad, but it was still hard to control sometimes as the pad was more designed towards up / down / left / right movement. Some players had problems changing directions, as Nigel cannot be controlled in eight directions, but only four. And sometimes, the controls aren't recognized properly.

Back in the day, some companies even released accessories solely for Landstalker that converted regular input to diagonal one. Nevertheless, the game is not much more difficult than it's action-adventure contemporaries.

And the game somehow doesn't fill up the entire screen, only about two thirds, with the rest being used by text boxes.

And so, players venture the island, visit villages, help the people there, and fight monsters in dungeons, all in a world full of nature, trees and a distinctive fantasy setting.

The game is available nowadays on the Mega Drive / Genesis collection that can be purchased for the PlayStation4, Xbox One, Switch consoles and Steam.

Sega Europe really did a lot to please European players. In Germany, Landstalker came with a thick manual and guide that helped players through the game. They even tried to visualize the complex platform passages by recreating the whole levels with clay. I don't know if this manual / guide was also included with other versions.

I don't know if it was Sega's intention to position Landstalker as a direct competitor to "Zelda 3". If you compare the resulting 69% with the 90% of Zelda, you might assume that Landstalker is inferior. But in my opinion, it isn't. Given my own experience with this title, I love it just as much as I love A Link to the Past. I might even love it a tad more since I love the atmosphere on the island so much.

Yet, I have to admit that the disadvantages caused by the perspective and controls can lead to frustrating moments, which deducts a lot of percents in the rating. I tried it again this year - and I was so annoyed about these clunky, unresponsive controls that I can't give the game more than a "okay" rating.