There are lots of ways you could play Breath of Fire II. There is the original game on the SNES from 1994, a new version on the Gameboy Advance from 2002 and versions on the Nintendo Virtual Console on the Wii (although the shop is now offline), the WiiU (2013) and the New Nintendo 3DS. 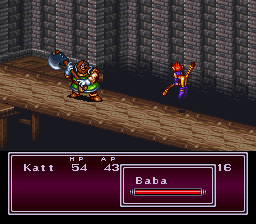 Well, this is, the original Breath of Fire II that you can also still play on WiiU and New 3DS. It is a very good game with a compelling story (which is not translated that well), a nice soundtrack, visuals and a simple, but effective gameplay. Breath of Fire II is loved by many, and the game does not have so many downsides.

One thing that's pretty annoying to many gamers is the incredibly high random encounter quote. In dungeons, one can't walk a few steps without getting into a battle. In addition, many of these battles require the use of spells and healing items afterwards.

Even if Breath of Fire II is not quire unfair or unbeatable, the long and frequent battles and difficult bosses could be show stoppers for some players. And so, still today, there are some who do not like this game because of those reasons. 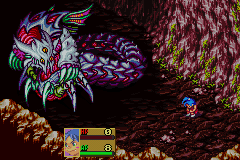 This is the only version that's different from the SNES original. For their 2002 "remaster", Capcom added a few cutscenes, redid the user interface, made the graphics brighter (as it was usual back then in GBA games) and had to tone down the sound quality for the (compared to the SNES) inferior GBA soundchip.

The biggest change was done in the gameplay mechanic. Capcom didn't work on the random encounter rate (it's still insane at times), but they increased the EXP and gold that monsters reward. So the game gets much, much easier.

Ironically, for some people, now the game was too easy.

The SNES original sounds way better than the GBA version, and the graphics look a bit better with an bigger color palette. However, the original game can be a chore with lots of exhausting battles and also lots of grinding.

So, from today's standpoint, we recommend picking up the GBA version. This one is harder to get, but it's easier to play and easier to follow the story without quitting the game because it's too annoying. Menus and avatars also look a bit better in the GBA remaster.