Composed by various artists for ocremix.org
Free to download. Playing Time 2:26:00
Written in 2019 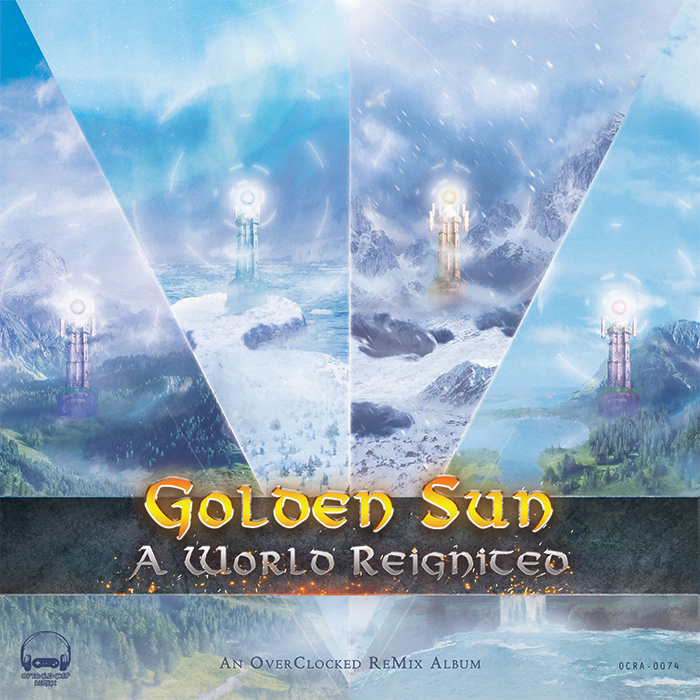 As you can see in our reviews here, we already have checked out some of OverClocked ReMixes' soundtracks. They are a great source for fan made music covers, with their tracks free to download. And this soundtrack here is the latest, 74th soundtrack made ready by some composers of that fine site.

"Golden Sun - A World Reignited" covers 37 songs from the famous Golden Sun series, developed by Camelot (the team behind the older Shining Force games) in 2001. The original soundtrack was composed by Motoi Sakuraba, which poses an issue for this album. We'll talk about that later.

In our Seiken Densetsu - Songs of Light and Darkness review I stated: "Fan made songs are always a mixed bag, they're done with passion and love for the game and the music, but often enough, there has been put too much love in them. The result is a poorly mixed song that just adds and adds tones and just feels to be just a bit too much".

It's safe to say that this is not valid for this soundtrack. All of the soundtracks are mixed correctly and refined that there are no awkward moments or parts within the song. Remixers are famous composers like TSori, dj pretzel himself or Rebecca E Tripp - musicians who know their business and can deliver tracks just as professional as possible.

There are some tracks that are especially outstanding, I listen to them a lot in my music players.

The rest of the soundtrack is pretty well mixed and fits a studying or coding session just perfectly. Good, atmospheric mixes and a joy to listen to.

As great as it is, I have one issue with the album. Golden Sun has a legendary soundtrack, composed by a Motoi Sakuraba who was on the hight of his creative output at the time. The only thing that was unfortunately on these games was the hardware they had been developed on - the Game Boy Advance. This console was known for its weak soundchip where lots of music had lots of acoustic noise and poor instrument quality.

Mr Sakuraba has a very special, unique sound that is loved by many. This album here has de-Sakurabaized almost all of the songs. Aside of "Another Point of View" and "What I Want to Say", I barely can make out his handwriting. So if you like to enjoy some memories and just feel the sound that's so typical for this musician, you might be disappointed.

If you listen to Soundtracks Mr Sakuraba himself covered, they're so often over the top and bear his special signature; this has been lost in "A World Reignited". I would not necessarily say that's a bad thing, since the overall quality and polish is incredible here. Yet, a part of me still wishes to have an album full with Golden Sun music that does not sound like a 1930s radio - as the Game Boy Advance soundtrack does.