Falcom - Tested on the Nintendo Switch in 2021

Ys IX: Monstrum Nox is the game that is a direct successor (both story-wise and from the order of their release) of Yx VIII: Lacrimosa of Dana, a game that we hold very dearly here at rpg-o-mania (well, except of Kaoru, but we'll respect his opinion!)

The game was announced to be a darker Ys game, more focused on exploring a single city, where all dungeons are started there. There were also some raids with special beings, called Monstrums, announced. So it seemed to be a smaller version of the Ys formula, and this was also the initial reaction from some news outlets.

I bought the game some time after its initial release, mainly because my wife wanted to see another Ys game. I didn't expect much - but I was very surprised.

The game was released on the Nintendo Switch, the PlayStation 4 console as well as the PC in 2021.

The story started when Adol, famous (and slightly bland) protagonist from the Ys series came to Balduq City in Gllia with his friend Dogi. The famous prison city is a sight to behold, but Adol got arrested as soon as he reached the city gates. 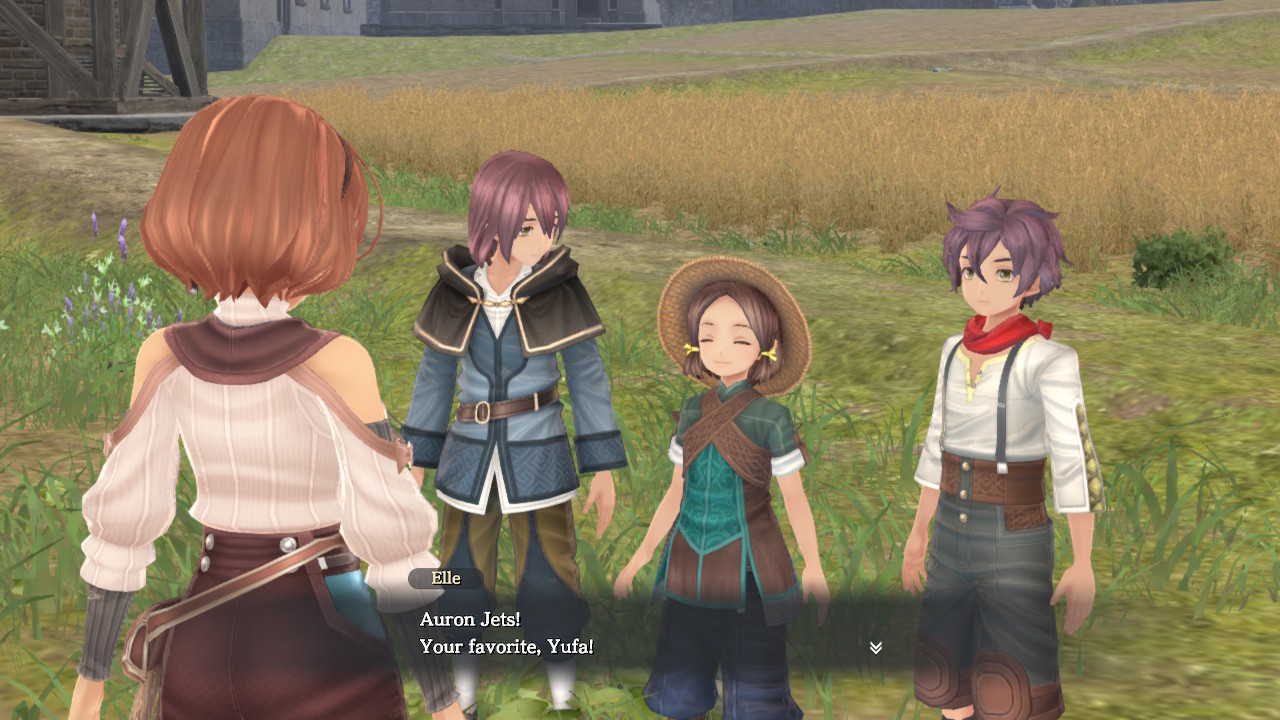 The Romun empire, who controls the country of Gllia, sees Adol as an enemy of the empire as his adventures sometimes clash with Romn interests. He got imprisioned in Balduq and was interrogated, but managed to flee the prison with the help of an older inmate.

Just as he wanted to leave, he got bestowed with a curse from a mysterious woman named Aprilis. She told Adol that he could not leave the city until he solved the situation of the Grimwald Nox, a parallel world where strong monsters gather. Only Monstrums (who Adol was now a part of, thanks to the curse) can defeat Lemures, a special type of monsters that appear during a Grimwald Nox event.

Together with five other people that have been turned into Monstrums, Adol has to regularly fight Lemures and eventually solve the riddles behind the Grimwald Nox.

The game consists of various gameplay mechanics. The underlying game of Ys is a fast paced action RPG with various attacks that can be used by pressing "R" and a corresponding face button. Evasion is possible with "L", and special attacks can be performed with "L" and "R". (The problem with accidentally executing special attacks like mentioned in our Ys VIII review is the same in this game - sigh).

Fighting skills are required in dungeons (which are mostly of the linear type) and Grimwald Nox events, which are basically raids where a sphere in the middle of the battlefield needs to be protected most of the time.

Dungeons can be accessed from the huge city of Balduq or from areas that span around the city. The game takes place not only in the city, but also in the outskirts - and those outskirts can be quite vast, so it's not only running around in an urban environment. 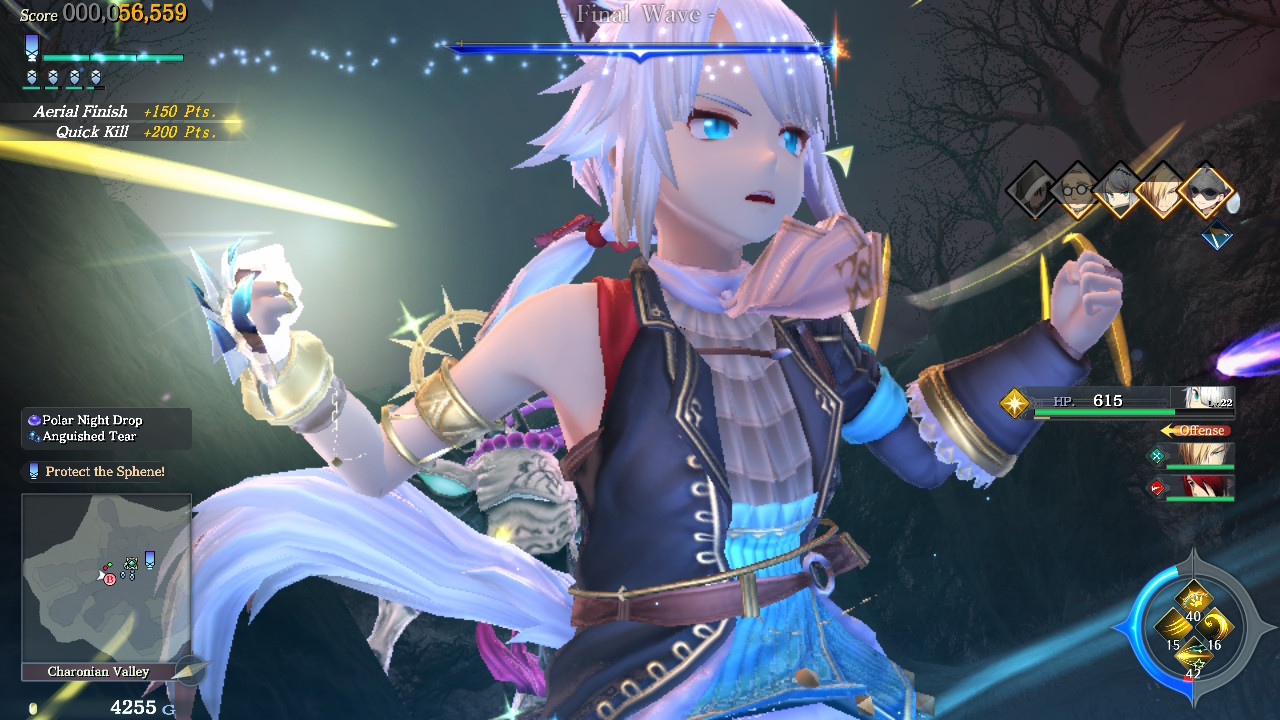 In the town, Adol can accept various sidequests from people, and sometimes he can make some friends which join him in his hideout and help him during Grimwald Nox events.

This is all very much like YS VIII. The city of Balduq is the island of Seiren, Grimwald Nox events are the same as Primordial raids and the hideout is basically the same as the castaway village. The only difference is that Balduq has working shops where things can be bought for money. Although crafting with materials is still very much possible at shops in the Dandelion, Adol's hideout bar.

During the course of the game, Adol befriends the other Monstrums and also gets to know their human selves, who eventually also show up in the Dandelion. Every Monstrum has a special gift that can be used to traverse Balduq city and dungeons and acts like a special item to unlock new areas to explore like flying for short distancs or walking up on steep walls. The Monstrums are also Adol's party members. A party consists of three characters where players only control one character at a time, everyone with different skills.

Only the player's character can receive damage.

The music was again done by the same team like in Lacrimosa of Dana, and it's again a mix of very melodic tunes and some hard rock / metal music mixed with synth beats. 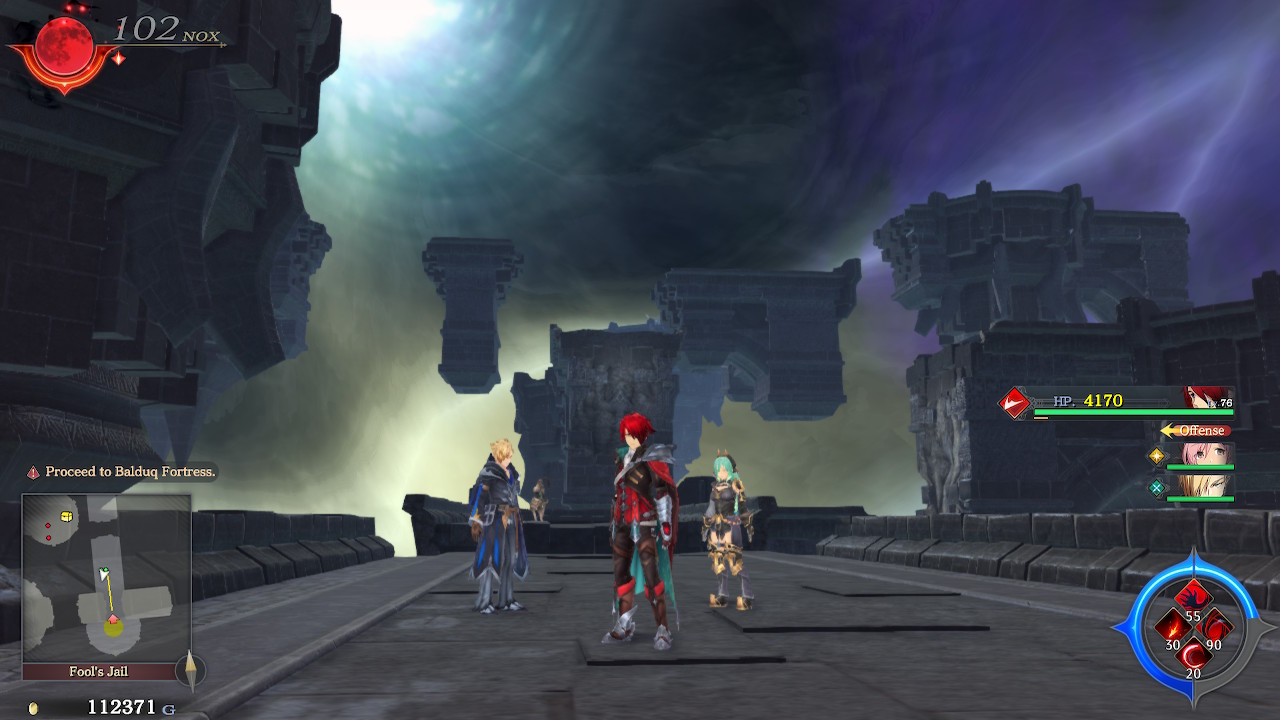 The visual style is very reminiscent of Ys VIII as well. On the Nintendo Switch console (which has been tested here), a few more modern effects in terms of lighting can be seen here and there, but the framerate is very low and there is much aliasing to be seen in the game. Just look at the screenshots here to see how it looks like.

The game itself seems to be put together quite well, it only crashed once on me during my playthrough (things I cannot say for every game, like Evoland II or Skyrim on th Switch), and even if the framerate was sometimes very, very low, the game remained playable throughout.

So, from a neutral standpoint, the game is basically more of the same as Ys VIII: Lacrimosa of Dana offered, where every part has been refined a bit and some parts have been added (like regular shops). However, there are no multiple endings anymore. After having finished the game, a time trial mode becomes available.

First I expected nothing of the game. Maybe a dungeon crawler in the Ys universe. But I was pleasantly surprised that this is a full fledged game with a great story, loveable characters and an interesting, unique scenery.

So I enjoyed it just as much as I did its direct predecessor. Even more a bit, as the game seems to be everything "Dana" has plus a little more. It's also a bit more somber, which I like. It's only sad that there are not different endings anymore; this was a huge incentive to do side missions for me in the previous game.