Ys is a pretty old RPG series. The first installment was introduced in 1987 on various computer platforms, and ever since then, the series receives a new game from time to time, and the currently latest one is Ys VIII â€“ Lacrimosa of Dana, which was released 2016 on PlayStation consoles and 2018 on the Nintendo Switch.

The series itself has had some ups and downs, some games were removed from the series canon, but in recent years, after a hiatus, Ys games are released somewhat regularly again.

And just like the original game in 1987, "Lacrimosa of Dana" is an action RPG, albeit a pretty modern one. Ever since releasing the first games, the focus of Ys is on accessible gameplay. Players had to just bump into enemies in the first games; the intention of the developers was to create a more fun gameplay, which helped to make grinding easier. This aspect is gone in the newest installment, but the game is still comfortable to use and avoids frustration at most points. 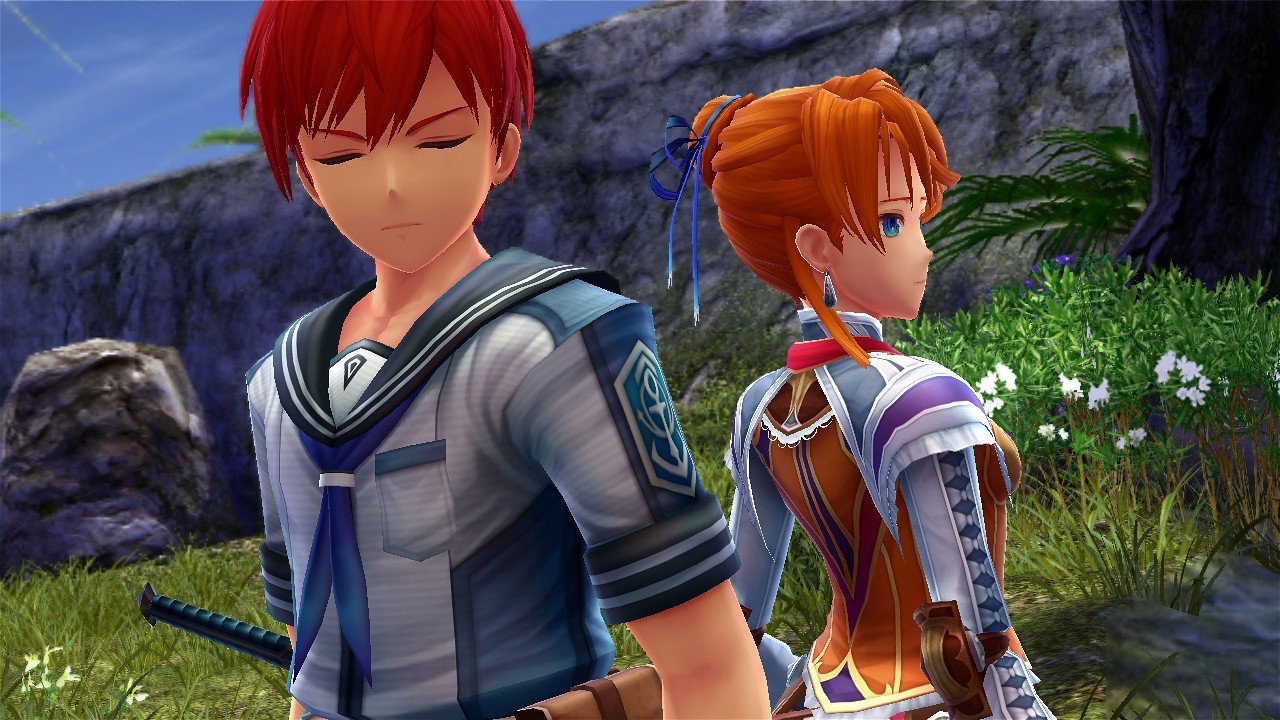 Players control Adol Christin, the hero of every Ys game to date, and a party of two additional companions. Battles are set in real time with an attack button and up to four additional skills that can be activated by pressing R and the corresponding key of a skill. Additionally, an "extra" skill can be activated by pressing R + L at the same time after it is finished charging up which takes some time. Avoiding enemy attack works by pressing L and tilting the analog stick sideways at the right moment.

By the way, this is the only thing that's a bit messed up in the controls and caused me to cry out "Nooo" at certain points. Often enough, I attacked with a skill (R + A, for example), and when the enemy came charging at me, I tried to evade by pressing L while moving. Ever so often, my finger was still holding R while pressing L, so I activated the "extra" attack and beat the hell out of a wall, or a bush, or just thin air. But since the game is so fair overall and "extra" charges up fast enough, I was never really frustrated. 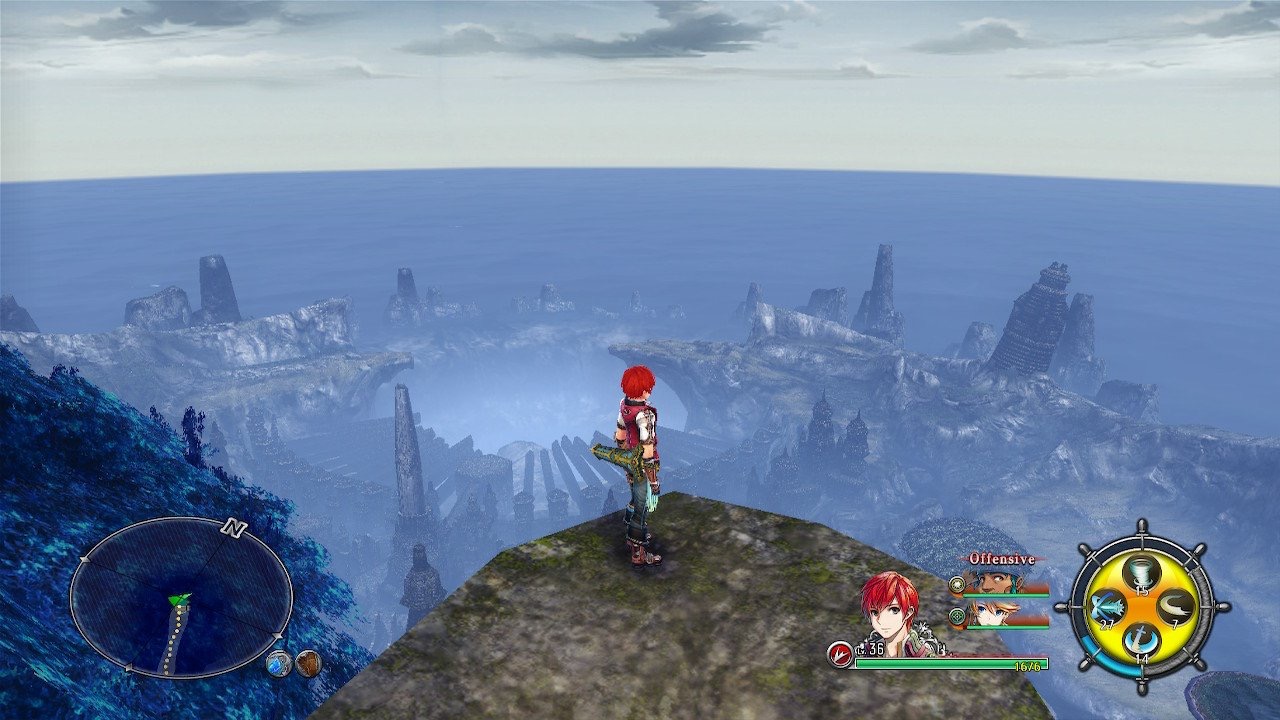 Gameplay itself is extremely fun. Adol controls great, switching between party members is done instantly, enemy movements are easy to predict and sooner than later I enjoyed myself in fast paced battles, swirling around enemies while switching between party members to always attack with the right person who is able to inflict the most damage to foes.

But let's put gameplay aside and focus on some other aspects of the game.

The story starts when Adol and his old friend Dogi were onboard of a passenger ship that subsequently was attacked by a giant sea monster. He washed ashore and had to find a safe spot, since the island he had been stranded to was full of monsters and also allegedly cursed. Soon, he was able to find some other castaways and also a place to set up a permanent camp - the castaway village. 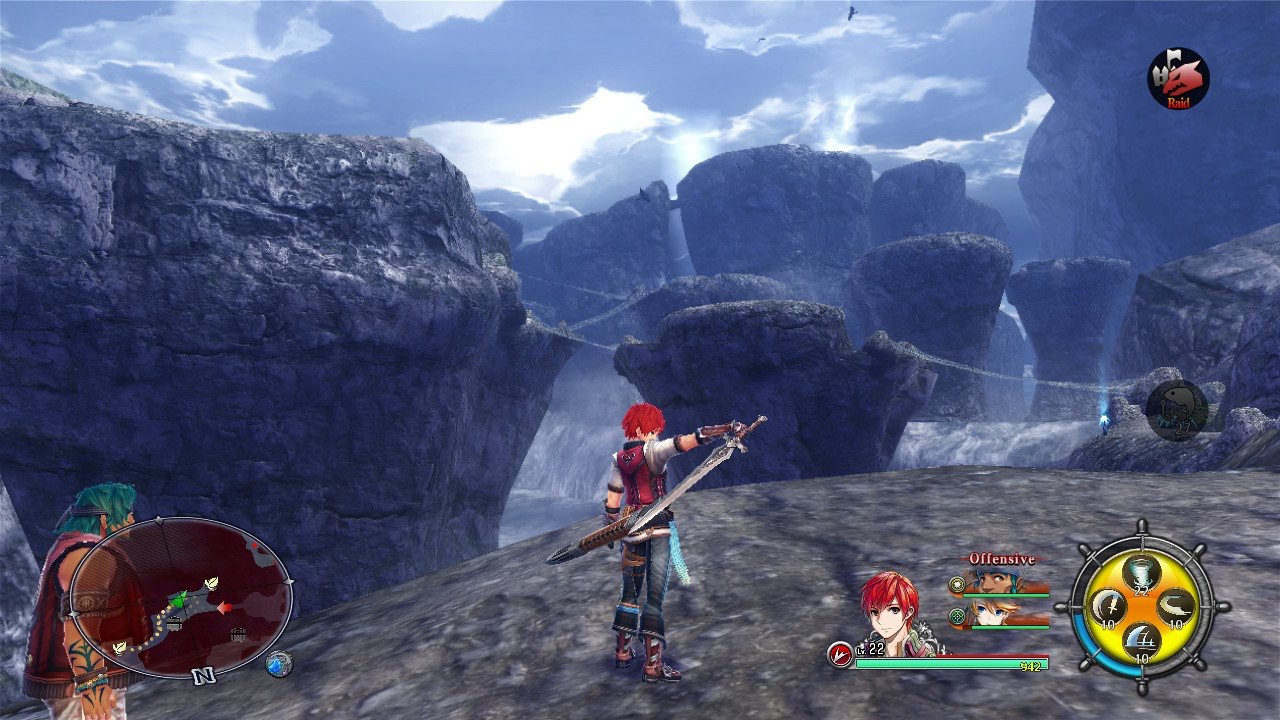 Later on, more and more people (up to 24) join the village and offer various goods and services. An interesting aspect here is that the game only plays on the (huge) island of Seiren the whole time, and all characters Adol is able to meet are castaways. Therefore, money is of no use on this island, and trade only takes place by providing the shopkeepers with the required materials to build their goods.

Side quests are available in Lacrimosa of Dana, but compared to other games, the list of quests and requests is quite small. Also, all quests have a time limit, which can range from short (one story mission allowed after accepting the quest) to long (many story missions allowed after accepting the quest). Players can also find some monsters and materials by fishing. Most of the game revolves around exploring, helping other castaways and find ways to escape the island.

The music is great, and although it is not composed by famous people like Yuzo Koshiro anymore, the soundtrack is incredibly rich in variation and sound quality. There are so many memorable tunes in this soundtrack. On the downside, I would say that some of the music is unnecessarily upbeat and sometimes a bit too much - almost reminds me of some games composed by Motoi Sakuraba. 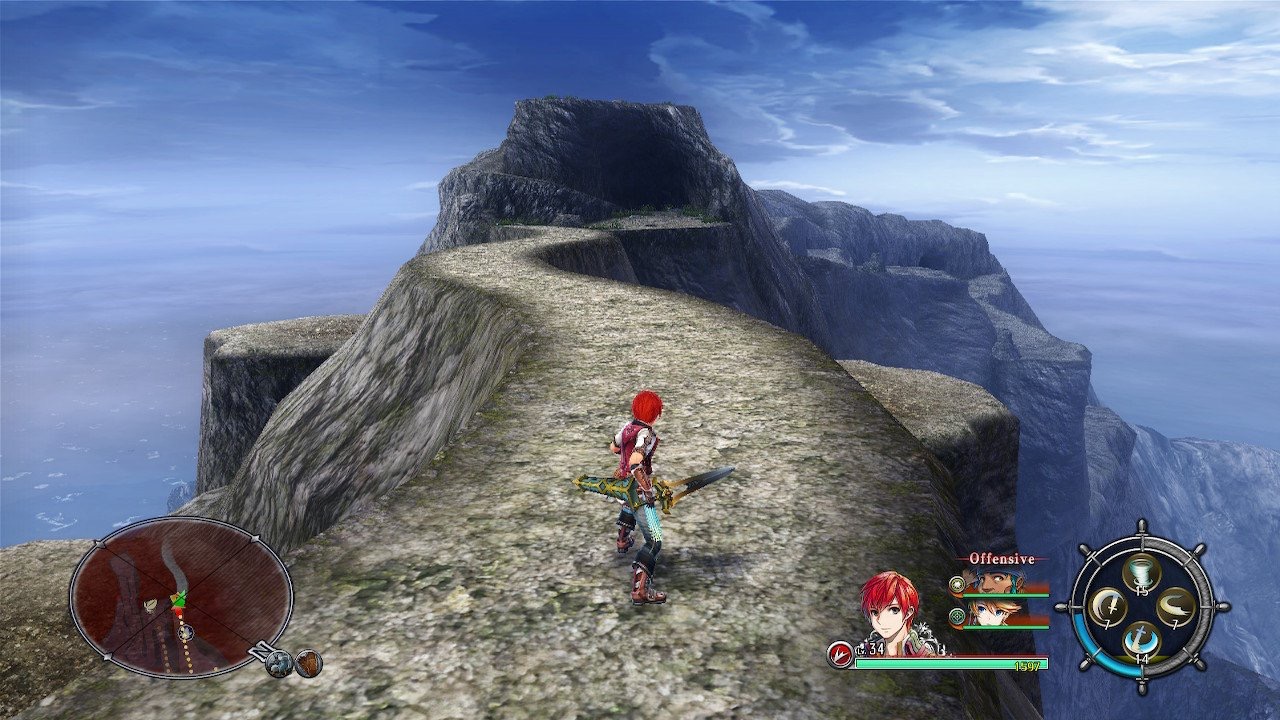 On the visual side, the game is a mixed bag. Some scenery is quite beautiful, but other areas are more reminiscent of games from the PlayStation 2 than an actual next generation game. Characters, on the other hand, are good designed, although some of the women look pretty much like they were designed with fan service in mind.

The port of the Nintendo Switch often scales down the resolution and often even ditches anti-aliasing, so it looks rough and even more like a PS2 game at times. But then, with an impressive draw distance, a fairly constant frame rate and considering that the team behind Ys is not as big as other companies, it's okay. The graphics do their job.

Allow me to come back to the story once more.

The baseline of the events in the game is as described above - it's a game that covers a group of castaways on an island that's haunted by a giant sea monster. But there's so much more to it, which has not necessarily anything to do with the initial storyline. I don't want to spoil anything for you here (Well if you want to spoil yourself, check out our Ys screenshot gallery, but be warned), so let me just tell you that the game is full of rich, likeable characters, it offers surprising turns and gets more and more intense by each new chapter. And the ending ist such a great experience!

The only downside of the story is the main protagonist, Adol. He is incredibly shallow and not more than an avatar for the player. I can accept this in a game like Zelda, but Adol is idolized (adolized? Haha.) as a famous, renown adventurer, but here he is a mostly silent protagonist that just seems to be here while the story unfolds.

I made fun of the lengthy title of this game right after the game was released, but now I always get a nice warm feeling when I hear or read the title. Ys VIII is a game that plays great, sounds great, is always fair and has visuals that sometimes can look good, but with great character models. If you can, I recommend playing it on the PlayStation 4 console. The Switch version is okay and your choice if you are in need of a mobile version and you don't have a Vita lying around.

It seems like Ys VIII: Lacrimosa of Dana the "Tales of" game within the Ys series. It looks super anime, the story is mediocre, the characters charismatic stereotypes, the action gameplay is button mashy and the whole ordeal is about 20 hours too long.

For me, that's just the case. But I seem to be a lone with this opinion. From all sides I hear just how Ys VIII is one of the best RPGs in later years. But here I stand, just like with Xenoblade a few years ago, shrug my shoulders and say "okay, I wouldn't go that far, but it's okay." And indeed, it is okay. It's easier to point out the things this game didn't do so well than talk about the things done right. Ys VIII is, aside from the strange cutscene-staging, a pretty competent game. The gameplay itself even is pretty much fun, but in the end, it's one of the weakest Ys games and just "Okay".