Persona is a funny little beast. It’s technically a subseries/spinoff in the very large Shin Megami Tensei series that spans dozens upon dozens of games all the way back to the first incarnation on the Famicom in 1987. Originally just one of many ways to branch out, Persona has by now become the most prolific incarnation of said franchise and the biggest money maker for Atlus.

Remark by DocOwer: The image shown here is not the logo of Persona. The game does not have an overarching logo, rather every game gets a new one. So I put a piece of artwork here. 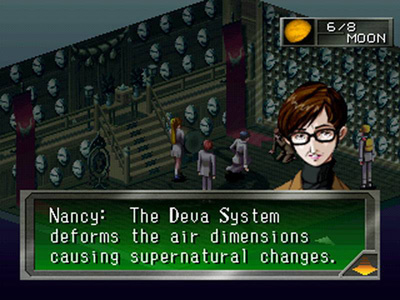 The original game was a try to market the doom and gloom of SMT to a younger audience. Hitting the original PlayStation in its earlier days, it went away from a postapocalyptic landscape infested by demons you had to talk into your team. Instead it sports a group of high schoolers of (then) modern day Japan trying to save their hometown from an encroaching supernatural phenomena.

The first game already lays the groundwork for a lot of the themes in the series. We get the mainstay Velvet Room in which the player can fuse new Persona – powerful beings that the party members equip to use new skills in battle. The story is also largely driven by the fears of one of their friends becoming reality.

In its original release in the US, Persona is largely known for a lot of changes to Americanize the game. Following the later breakout success of the series, there was a PSP port made which both ommits those changes and tries to make the archaic original a bit more playable to modern audiences. 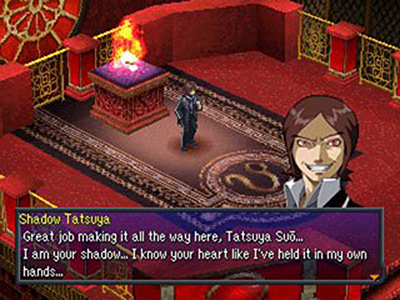 For the second game in the series, Atlus had big plans. It would not be delivered as one game, but as two connected tales released a year apart from one another. Innocent Sin hit shelves in 1999 and sported a new cast of high school students trying to find out why rumors are starting to become reality. It’s a weird tale of childhood trauma, antagonistic Pierrots and blimb flying Nazis. It also ditches the first person dungeons of the original for a more fitting overhead perspective.

The original game never saw release outside of its home country, but a PSP port would later follow suit to the original’s and be released world wide. 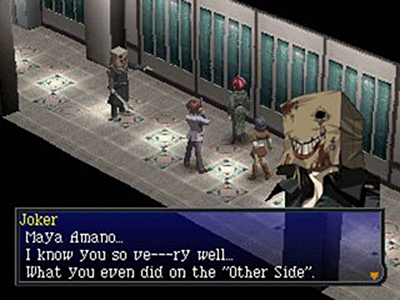 Eternal Punishment sets of after the end of Innocent Sin. Taking place in the same town, but with a new main character and a cast mostly made out of young adults, the new mystery is why everything has changed since the previous game’s happenings. The game plays mostly the same as its predecessor with some little improvements. Yet the tale is a bit darker, even the recuring Joker is less of a Pierrot and looks more like a serial murderer in this one.

This was the game to be released in the US where it became a cult classic. It’s good then, that, while they are connected, both Persona 2s can be played as stand alone games. To turn this on its head, when the ports to PSP happened, it was Eternal Punishment this time around that never left Japan. But the original version was made available on PSN to compensate this. 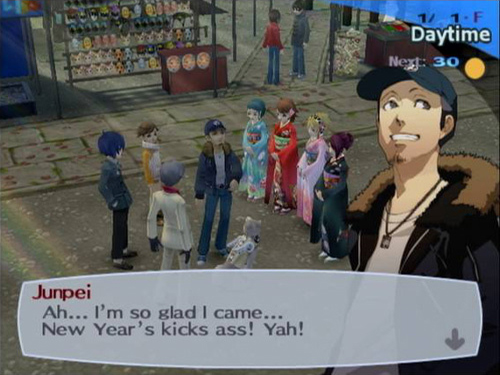 Half a decade later, Persona 3 hit the PlayStation 2 and reformed the whole series. The modern day teenagers would now go into a randomly generated dungeon at night to figure out why a thirteenth Dark Hour appears after midnight, which lets shadows roam the town. But during the day, the player hast to successfully stir his character through normal life, attending exams at school, going on trips on vacations, and befriending different characters to strengthen his bonds. All this wraped into a very modern anime style.

It is this game then, that started bringing the franchise on its current track of success, which would lead to reaching into other media and spinoffs. But first there was Persona 3 FES. An expanded re-release still for the same system, its biggest addition is the controversial Answer arc, which adds another 20 hours of post game story to the already long game. The obligatory PSP port omits this addition, but lets you play as a female lead and changes the exploration outside the dungeon to a speedier visual novel approach. 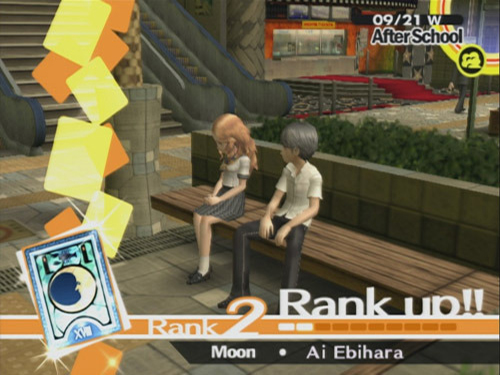 This was followed up two years later by Persona 4, which wouldn‘t re-invent the wheel and thus offers the same mix of crawling random dungeons at night and playing a social sim at day. Putting the focus on a series of supernatural murders that shake the small town of Inaba, only our protagonist and his friends can investigate the shadow realm that seems linked to them, while also having to face their adolescent fears made flesh. Now looking even more colorful and stylish than ever before!

The late arrival to the PS2 would also eventually see a port to portable systems, but this time to the PlayStation Vita as Persona 4 Golden. Not adding a whole new storyline, this time offering a new character that once again was controversial amongst fans of the original. 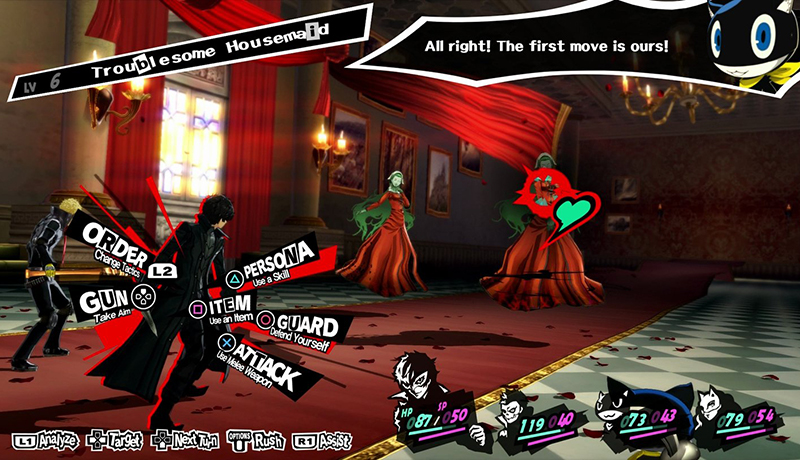 With Persona 3 and 4 being smash hits, it didn’t take long for Persona 5 to be announced for the PlayStation 3. But it certainly took a while to actually materialize, with the team behind the subseries having a little fun making 2011s Catherine in the meantime. When it did finally happen on PS3 and PS4, the core gameplay was again not changed much, but Persona 5 would offer the most content and quality of life to date, to the point where one might almost call the length of the game obscene. This time the colorful cast of teenagers gets the power to invade the mind palaces of public figures in hope to reform society for the better. It’s the most ambitious story of the series so far, maybe even a bit more than the game manages to chew.

Persona 5 didn’t just look and sound the best in the franchise, delivering probably the most stylish package seen in the history of JRPGs, but it also sold the best with roughly 3 million copies world wide. This game too will soon see an expanded re-release as Persona 5 Royal. 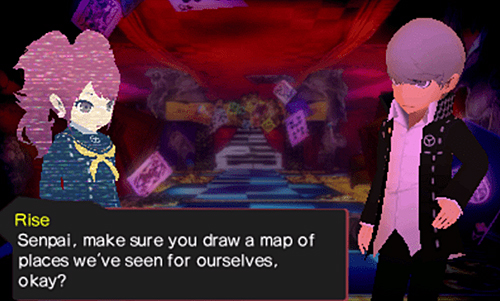 The success after Persona 3 wasn’t long left untapped. There is countless Persona merchandising, it reached other media like anime and stage plays, and there of course are also many a spinoff game. Yes, spinoffs games of a spinoff franchise (from a main series that’s also originally a book licence).

But only two of these are relevant in the scope of RPGs: Persona Q and Persona Q2. Due to a flimsy excuse or the other, the teams of all these games (or rather, 3 and 4 in Q and 3-5 in Q2) come together for some dungeon crawling. The social sim is gone. And the dungeons now take the first person form of Atlus other series Etrian Odyssey, while also sporting a chibi-fied look. The whole ordeal is of course mostly just there to have fun with the excentric cast, but at least when it comes to the first game, the results are mixed. 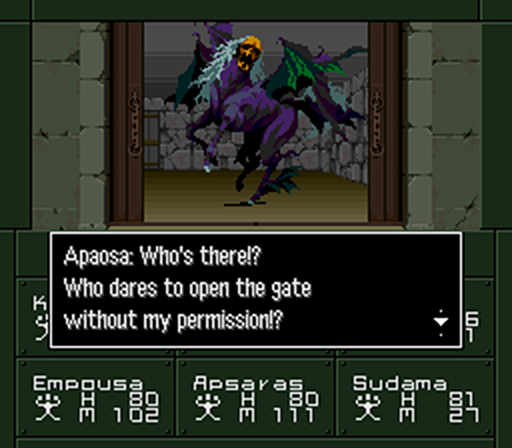 This Japanese exclusive Super Famicom game is a bit of a footnote to Persona. Mostly in that this spinoff already tried similar things (and a character exists in the earlier Persona games). In here a high school suddenly gets transported into a demon realm and the main character, together with one human partner out of possibly four, has to find a way out of this pickle.

So the setting is similar. And every time one of the two humans in the team dies they get assigned a Guardian, which changes their stats and skills, in a way that the Personae later would in the Persona games. The first person dungeon crawling aches more to the main SMT series though, with having to negotiate demons into filling the rest of the open slots in the team and being able to fuse them into stronger allies even.