Another very successful year for RPG-O-Mania. In that year, the counter reached the 50.000 mark, I had very much fun working on the site and the layout created back in 2000 was even recycled in 2002. 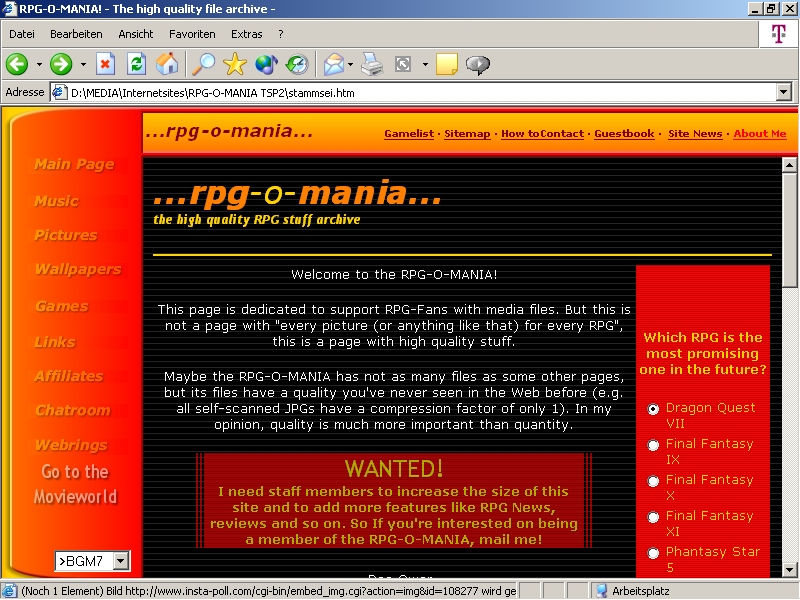 This was the look RPG-O-Mania had at the beginning of 2000. Actually, it was nothing but a facelift of Version 3 with some more goodies at the beginning. During its evolution, Version 4 got some interesting Extras like a poll, a game movie subsite (movieworld), many of its current specialities (like the Shining Force images) and of course hundreds of new media files. 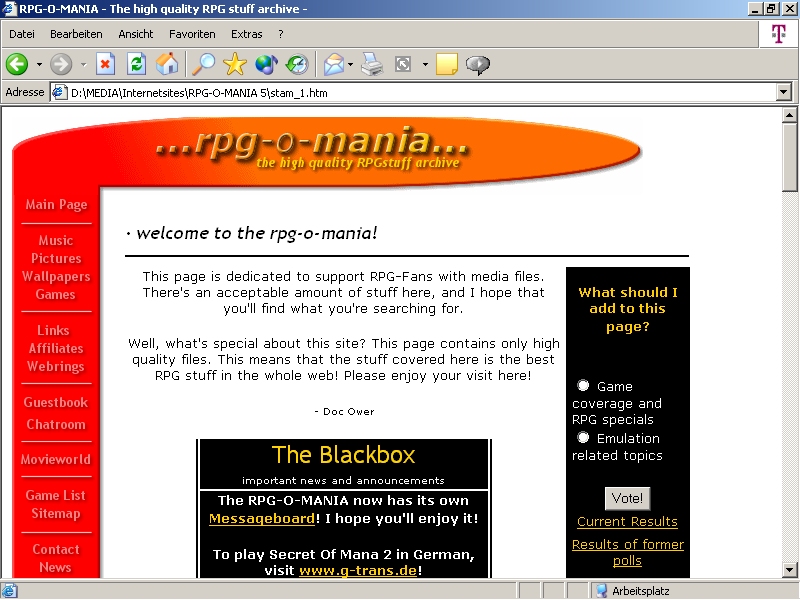 I "recycled" the colors of Version 4 in this layout, I have to say that they were a sign of RPG-O-Mania for quite some time. Anyway, this Version was a step forward like the step from the 1/X Version to TSP. I made a completely new, "frameless" layout. Sadly enough this layout was made using Frontpage, so the site showed up correctly just to those people who used the MS Internet Explorer. This layout was also the first one made using only Corel Photopaint. I made this version in Spring 2000, during its development I added a messageboard (and had to remove the moviepage) and various other possibilities to interact. 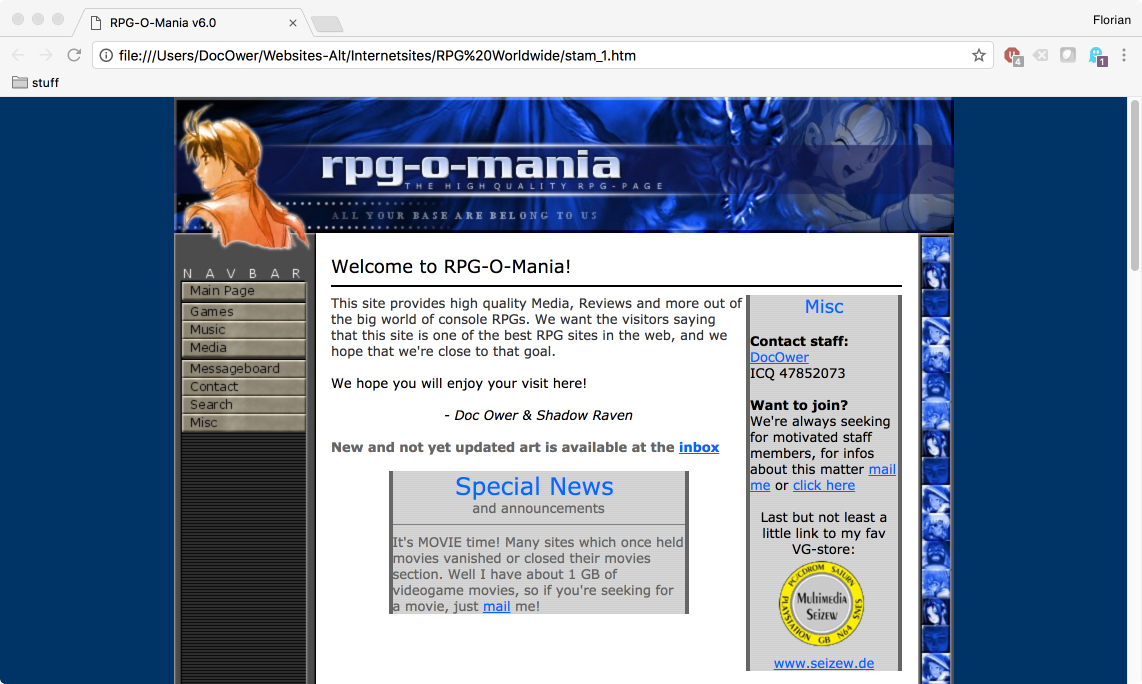 The last "successful" version of RPG-O-Mania before 2001s' downtime. After this version, I wanted to try some things out and they ended up in a complete mess and the good old RPG-O-Mania almost vanished. During Version 6, this page even had three staff members for some time. Shadowraven, Mr. X and me. Back then, we had a lot of reviews, some Showcases and even loads of movies online. I even exceeded the bandwith limit granted by zophar.net, my host back in these days. This was some cool, but really stressful time.

Things changed in my life, and I lost interest in the page after working on it for almost two years. I wanted to try things out and handed the page over to a good friend, but he also lost interest in this webproject soon, so nothing remained here for a short amount of time. However, this website was only offline for a short time and was replaced soon by a newer version.

A new year, a new chance. But what happened in 2001 was not something I could call "past". I didn't want to carry the responsibility that comes with such a big page. So I thought about starting something small.. just some hobby I attend some times to kill some time. You see, as professional as RPG-O-Mania went, that was just too much for one person (at least I thought), for a person with some private life too. 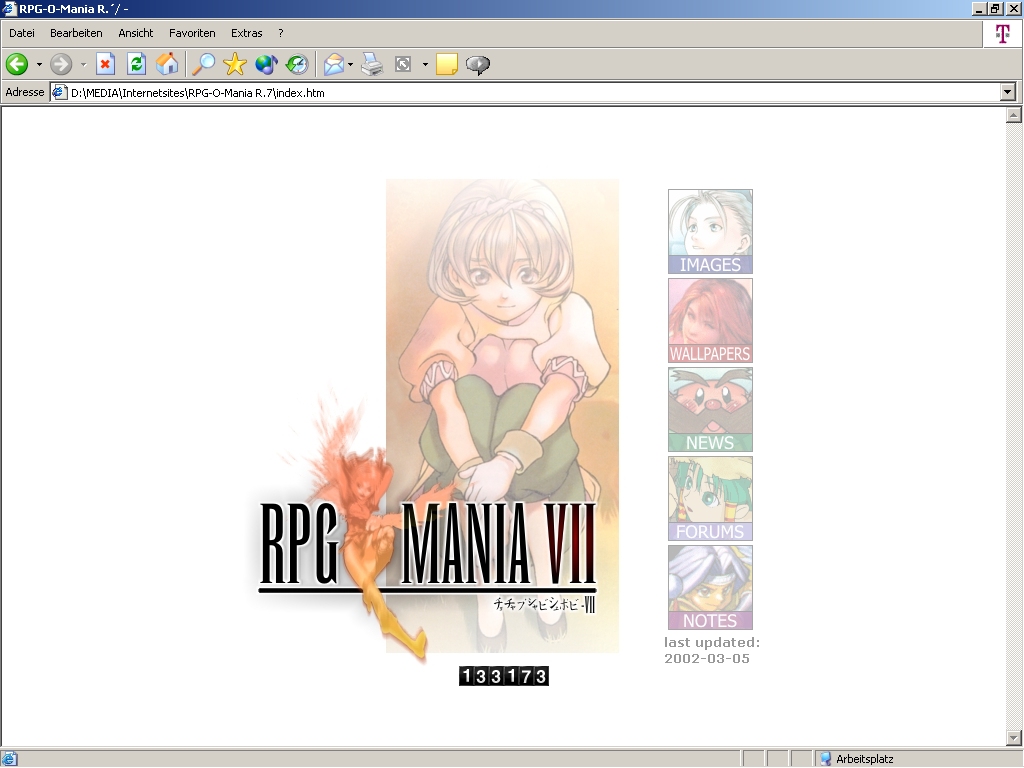 This should be the new start of RPG-O-Mania. I already re-added some files and I have to admit that I like the layout (especially the Final Fantasy looking Logo). But like I said, what happend in 2001 has not been forgotten yet. I was not sure whether I really want to restart RPG-O-Mania. So one day, I stopped updating. Yet, I tasted blood again. And I knew, I want this page to live! rpg-o-mania lived again, and this time for a longer time period.

Although this version suffered from a loss of visitors, it was kind of successful. The layout is still great in my opinion (although very very static), and the content was pretty good as well. Another milestone was that RPG-O-Mania became the #1 result of Google if you search for "Breath of Fire Artwork". 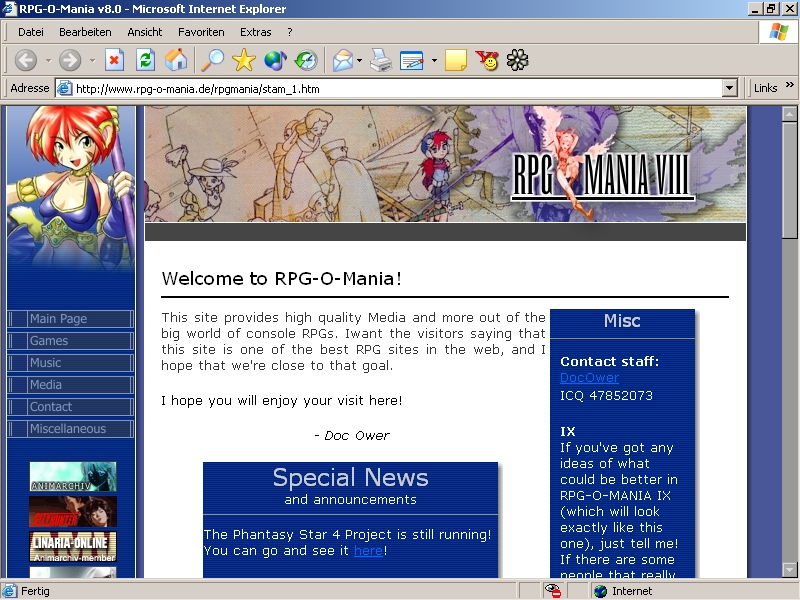 The visitors, however did not appreciate how I managed RPG-O-Mania back in those days. Well, I really do understand that. RPG-O-Mania 8 was a "light" Version of RPG-O-Mania 6 (a more than two year old page back then!). It had less content and the updates weren't too big. I realized, if I want more people to be attracted by RPG-O-Mania then I have to actually do more for them and not only polishing old stuff. This was the reason why the idea popped into my mind that I should rework RPG-O-Mania from scratch.

Nine, nine, nine. Almost the whole year there was only one Version of RPG-O-Mania that ruled this webspace. 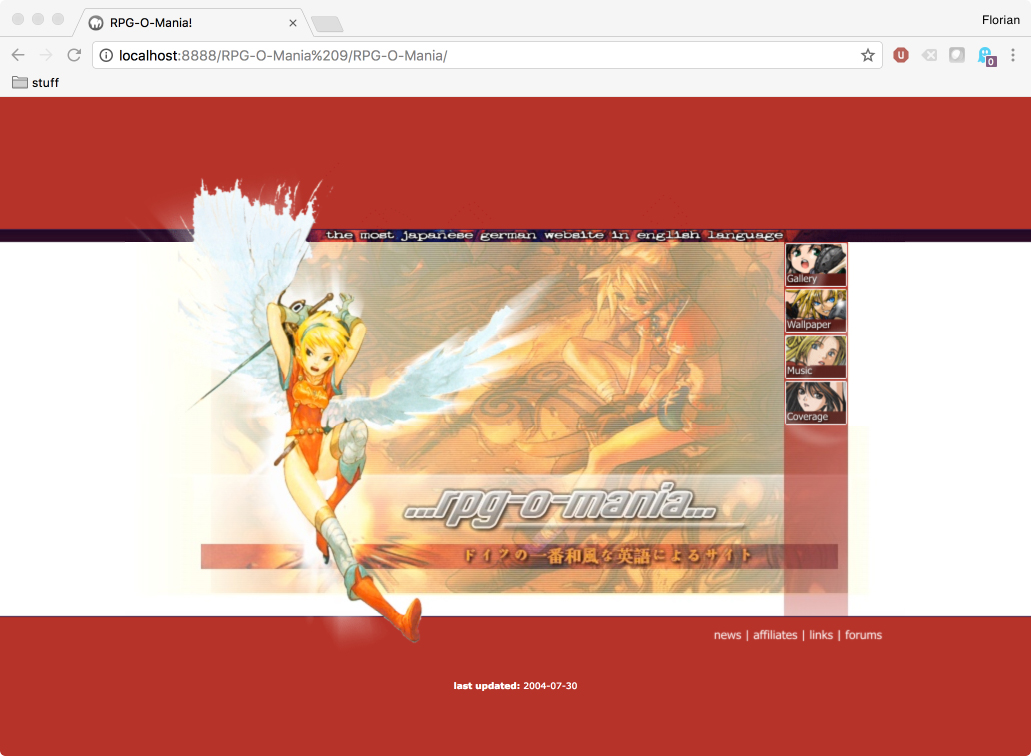 This one started on 12th January 2003, and back then I couldn't imagine HOW successful it would be. 9.0, its facelift 9.5 and R.9 was not only the version that lasted the longest period of time until then, it also made RPG-O-Mania that what it was in 2000 - a well-visited, renowed website. It even topped the success of the older versions - any of them. There were absolutely no problems R-O-M went through, it was a slow but gradual process of becoming more and more popular and successful.

The situation had changed, back in the beginning of 2004. No radical cuts, no catastrophes or bigger changes happened a year before.

RPG-O-Mania changed from the "alyways in the mood for a change"-website to a steady website with some sort of "own idendity". Although there were various facelifts in 2003, the design never changed its basics. And even the layout of June 2004 still took its inspiration from version 9.0

As of June 2004, there was still now new version to be announced. Yet, the page online then was almost completely different from the version announced in early 2003. The PHP-script responsible for the galleries was tuned up so it loaded the galleries REALLY fast, the navigation was unified and the forum had been integrated into the website's layout. There was no sight of a new Version to come for some time.

Someday, I fiddled around with Photoshop once more, and created almost accidentally a new layout for RPG-O-Mania. Since I wanted the page to have a full layout including some decent border, I created a new version. 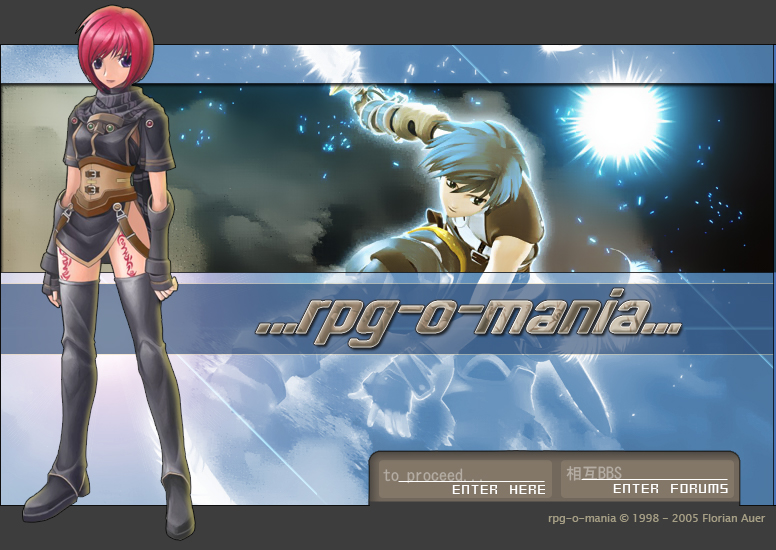 Basically, this so-called "version 10" is nothing but a different-looking version 9. Yet, the layout changes does inflict not only the look of this page. The main navigation went back to where it should be, to the left of the page. In order to avoid re-organizing all the "inner" pages, I had to widen the layout of RPG-O-Mania. So this is the first version of the page that's not compatible to a screen resolution of 800x600 anymore.

Version 10 developed quite well. There were no significant changes from the technical point of view, but content changed drastically. I decided to remove most of the fanart after some artists complained that posting art on this site here results in a loss of visitors on their sites. I understood and changed the focus to host mostly official artworks here. The coverage content posted on RPG-O-Mania also increased a lot. A new "spotlight" section focuses on some games that are yet to be released or reviews already released games. The coverage section also increased and made this page to a source for many unique informations. 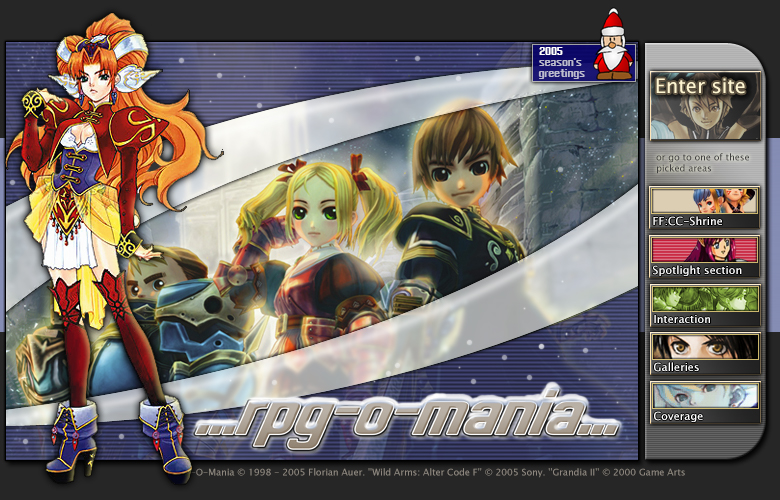 So, 2005 passed without too many changes. The page was updated a lot (exactly 150 times) and grew awfully big. Over 250.000 unique visitors surfed to rpg-o-mania.de and the new URL rpg-o-mania.net. An awesome number, I think. The page was still just an one-man project, although I got lots of help from other people during 2005.

2006 arrived and I grew increasingly displeased with the layout. It was not bad, not at all, but there was always a design difference between the splashscreen and the main layout. 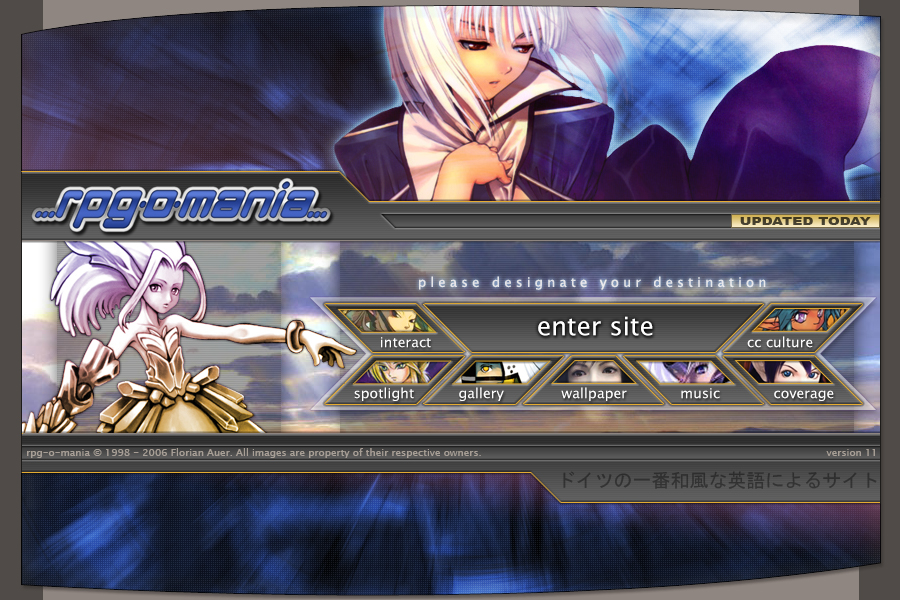 Friends told me how astonishing this new, unified layout was. I, however was still displeased, even more than I was before switching the layout. The situation grew more and more dire, I even thought about closing down the page. No - that was definitely a sign that I had to do something. I spent a lot of time thinking what was wrong with the layout, until I came to the conclusion that it was the dark theme of the design that bothered me so much. It was so unfriendly, and for a dark layout, it had a major flaw: The content was black text on white background, and the big white background in the center of the layout just seemed so incompatible to the dark surrounding. I needed a fast countermeasure so that I didn't lose interest like I did once before in 2001. 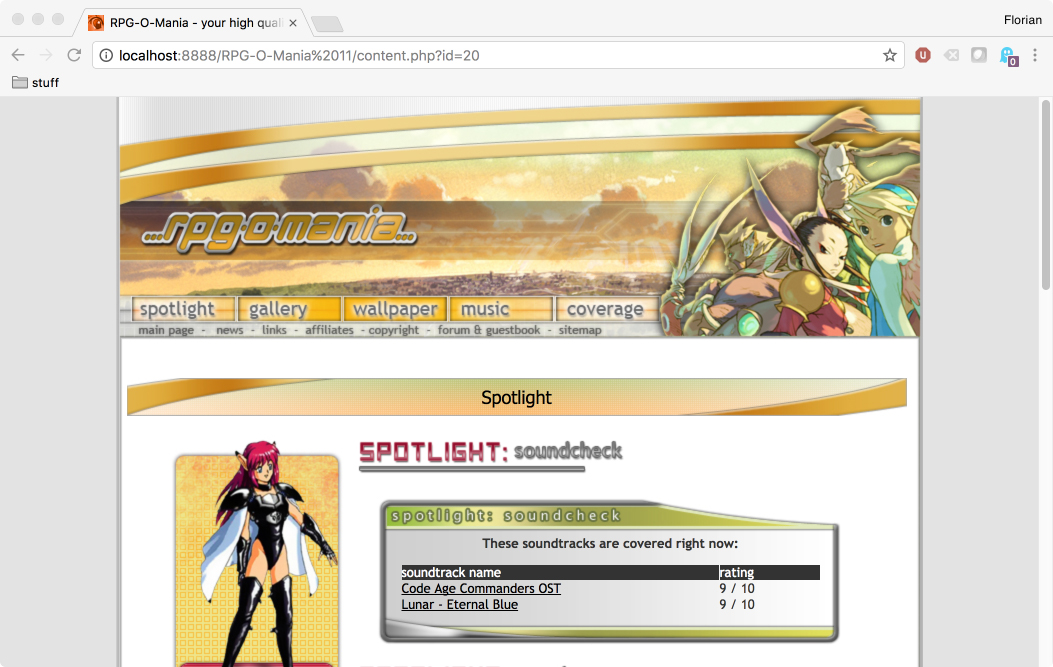 The layout of this version was created relatively fast. While it was developed, the main desire was to create something friendly which is not over-designed on top of that. I think I did that job very well, although I'm sure many of you will consider this layout being cheaper than its predecessor.

The seventh Bithday of RPG-O-Mania arrived with little changes in RPG-O-Mania XI. The layout was brushed up a little and there were rotating splash images introduced. Other than this, the page grew bigger and bigger, on September 6th, 2006 the page was over 700 MB big with over 600.000 counted visitors. It astonished me how a small project like RPG-O-Mania could grow so big just by giving it enough time.

It's always fascinating to see how RPG-O-Mania changes if something in my private life as well. At the beginning of 2007, my studies at the university of applied sciences in Landshut slowly came to an end (well, there was another year full of learning and part... stuff ahead of me, but anyway, I needed good grades and therefore had to study a little harder), so time for surfing and doing updates on the website was limited. There was another rpg-o-mania 12problem at the start of 2007 to be faced, namely some legal stuff. Throughout the years, I had never been accused for doing anything illegal, and that situation didn't change in 2007 either. However, the legal situation in Germany changed so I could be accused even if every thing was perfectly right (it's a tad more complicated than that, but there's no reason to blather about complicated and uninteresting details here). However, this problem was faced - but not the problem of updates getting rarer over the time. And just how it turned out to be, less and less visitors per day visited the site. It's only natural, no one checks out sites daily if there's no update to be expected. 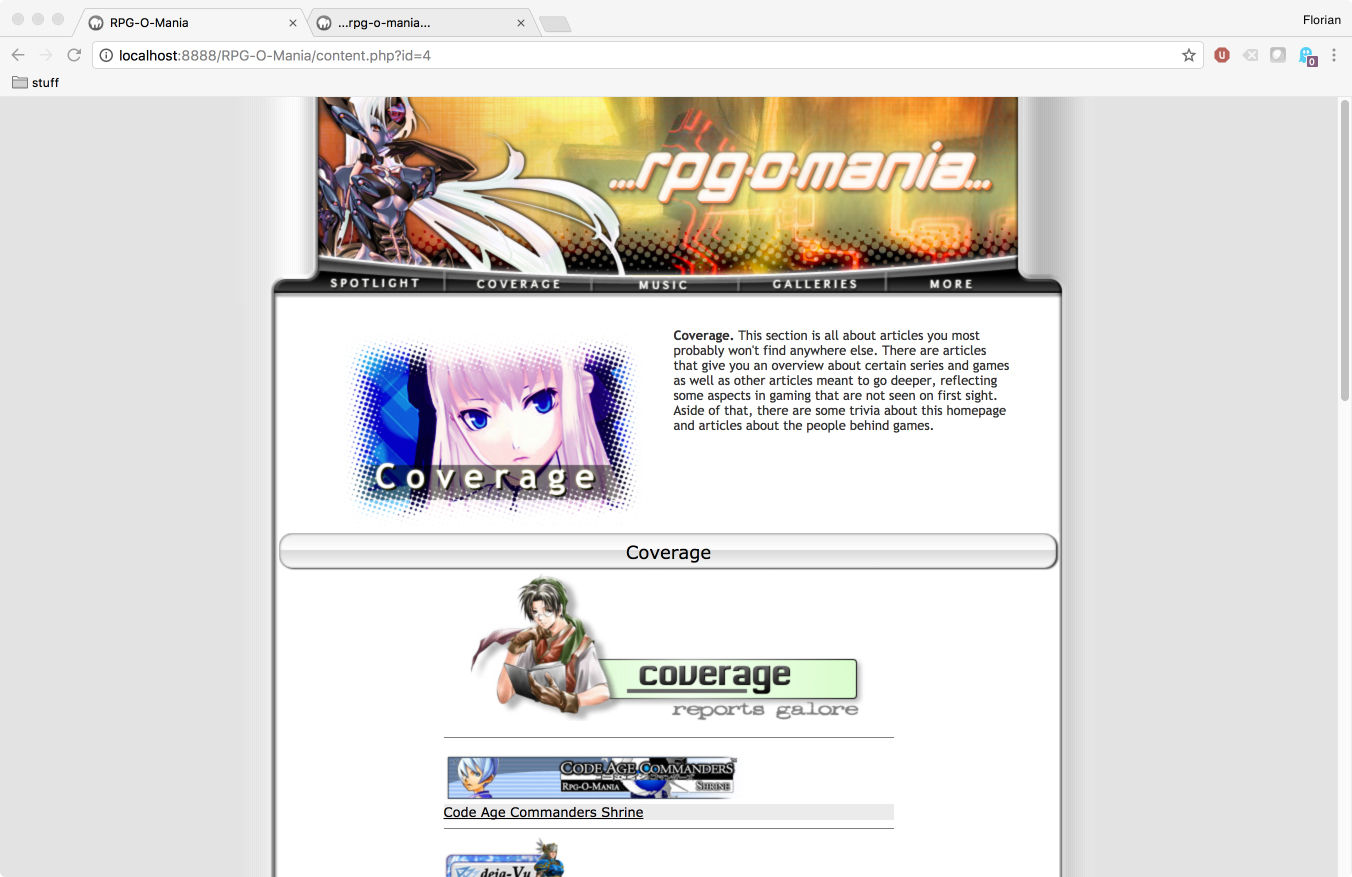 This version had some sort of different structure than the previous versions and was based on an overhauled kernel. Since I got an Apple Mac Mini a few months before that, the design was shifted to look a bit more "appely" - aside of that, the main innovation of that design was that, depending on the article, the head image was replacable so that it could fit the content of the page below.