I honestly had to laugh when I checked out the two versions of Lufia II when I prepared for this article. Lufia II: Rise of the Sinistrals is a classic, turn based RPG on the SNES beloved by many (not by me, though). When I just recently heard that there had been a remake released in 2010, I did not hesitate and purchase it since I liked the story, but not the riddle driven gameplay with its barebone combat and super super super deformed characters.

So what did I expect? I've seen the promotional screenshots and thought it was a nice 3D remake with new graphics and character models. Oh how wrong I was, but let's take a look at the two versions.

Lufia 2 has nice background art, likeable sprites, huge monsters and a great soundtrack. The gameplay is standard turn based combat with only a few additions like that players can add some monsters to their combat team. Combat sprites are super deformed and monsters are not animated, during attacks, the monsters' sprites are simply mirrored.

The game is heavily focused on riddles so that it is more a mixture between games like Zelda and Final Fantasy. 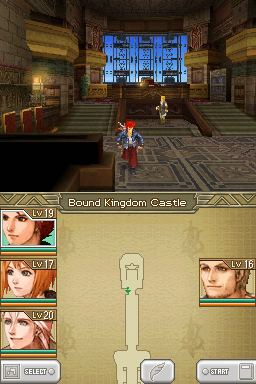 It is incredible that the team behind the remake, Neverland, did not just made a whole new game. This Lufia 2 is so different to the original one, they could have just gone with a completely new one, but it seems that the developers really liked the original game. The basic story is the same (although some characters meet at different points than the original), but it is vastly extended with new cutscenes and voice acting. But the game now is a action RPG where players only control one character at a time.

The game has still some focus on riddles, but they're totally different than in the original. Basically everything is different - dungeons, towns, areas, everything has been created from scratch. The visuals are quite impressive for a DS game, since the handheld does not fare too well in terms of pure 3D visuals.

The only thing that remained almost untouched is the music. A great choice, since most of the original melodies are amongst the best in SNES RPGs. A downside is the absence of an overworld, now navigating between places is in a menu, like in so many games back then.

Remember how I wrote that I laughed when I first played the DS Lufia 2? I said to myself "How can anyone compare these two?" - it's really almost impossible to say which version is better since they are so totally different.

But in the end, if you like fair and balanced action RPGs, then the DS version is the one to choose since it offers a good looking, good sounding package - the only downside is that there's no overworld. Yet, the extended story makes up for that, and the riddles and mazes are much better structured, so it's easier to actually enjoy the story in that version.

Not that the SNES version is really bad, it's a neat turn based RPG. It's just that the DS version is more modern, has the better story and a tad better to play.