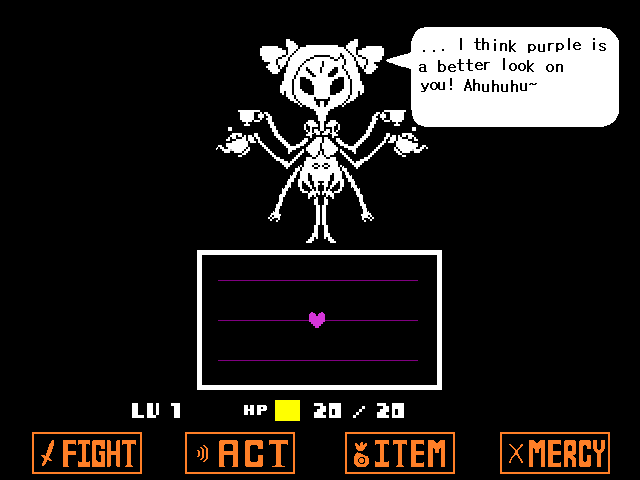 A few years ago, I purchased undertale because the concept of a game where you don't have to beat monsters in battle was pretty interesting. I really like the concept of the game itsemf, but also the battle system.

Undertale first looks like a classic turn based battle systems. When monsters approach, players have to choose if they want to fight, act, use items or release the monsters from battle. There are some interesting concepts that are intertwined here.

Like advertised, players don't have to actually fight the monsters. They can act in certain manners, interact and talk to enemies, and after they have been successful, the monsters can be released with the "mercy" action. Acting and releasing does not award any EXP, preventing the character from leveling up, though.

(Why do I call it release? Because that's the same principle behind the Suikoden games when players are too strong for monsters, instead of "running away" in that case they can "release" the monsters.)

Not every action in "act" results in a peaceful reaction by the enemies. Sometimes they attack the players' character. In that case, usually some bullets are shot towards the character who can evade by controlling a heart within a limited size box. There are some variants to that, sometimes the bullets come in specific manners, sometimes the heart cannot be moved, but instead a shield and so on.

When the player chooses to attack (which sometimes is not avoidable), they have to time a cursor that moves around in a special area and press a button at the right time.

You see, it's a really interesting concept with much variation. The game is just as full of quirks and features as the battle system itself. It never gets boring, and every boss battle or even just enemy type can surprise players with new attack patterns.

I can't say much about attacking, though, as I always played the true peaceful run.