Interview with a mapmaker 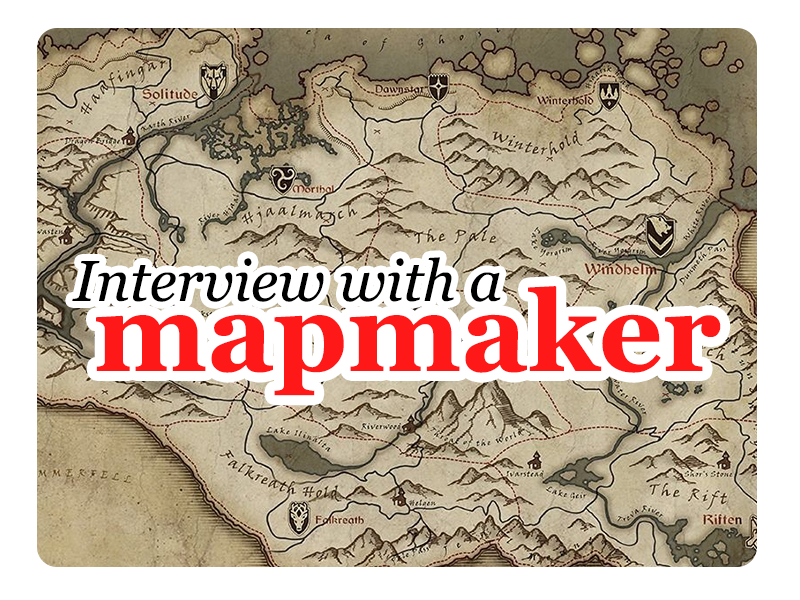 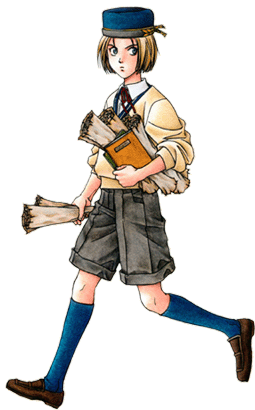 Back in 2018 I joined Twitter mainly because it was one of the few possible solutions to upload images from the Nintendo Switch game console. A few weeks later, though, I started following people that do interesting gaming related things. And soon, I saw some posts from @WinterDisa, who does not only seem to play tons of interesting games but also likes to draw maps.

(Please note, the decorative image here is Templeton from Suikoden and not Disa, whom we interviewed. Also, Templeton is a boy.)

As stated in the introduction text, I really suck at drawing maps which makes playing games that rely on that skill virtually unplayable. Seeing Disa's posts, I concluded that there really are some people who are not only skilled in this art, but also like to do jobs like these.

So I wrote her a direct message and asked for an interview, so that we can get insights into the art of mapmaking. Here you'll find my questions and her answers. Thanks a lot for participating Disa! Be sure to follow her on Twitter!

What was the first game you created a map for?

"Mapping is a fairly recent passion of mine and as such I haven’t finished a lot of dungeon crawlers yet. In fact I only learned it last year and my first game was Shining in the Darkness.

Okay this is a bit complicated. I started on that game and then just a couple of weeks later I learned that someone I know on twitter had created a podcast called RPG Golden Years and planned to play through all console rpgs 4th - 6th genration. I knew I had to be a part of that journey and since SiD was game 7 on the list I put it down. I missed the mapping though and quickly picked up Wizardry I which also was my first and so far only completed game. It was challenging, but a ton of fun too."

Do you create maps also for games that already have auto mapping features?

"I do create maps even if it has automapping features. I play MeiQ on my Vita which I just play mostly in bed or outside and my mapping kit isn’t really handy to have then. But I also map a Switch game who has automapping, Heroes of the Monkey Tavern. I can hide the map and it’s on the simpler side so mapping it is part of the journey."

What was the biggest mapping project you ever created? Can you provide a picture or sample of that?

"I’m actually in the middle of my biggest mapping project, probably ever and it’s put a halt on all other mapping. But it’s a part of the list and I have mapped 19/22 for it so I won’t give up. Double Dungeons (remark by editor: See more about Double Dungeons below) is super generic and it’s unfortunately waaaaay too long for it’s own good."

How often did you have to recreate a map because you noticed a mistake?

"Good question. It has happened, usually not too often and all the training with DD has made me better and faster I think. 3 or 4 times I think in total. Usually I spot it before it gets too difficult to fix."

What is the trick of creating maps for multi level dungeons? How do you know where dungeon levels are connected?

"Most dungeon crawlers span only on paper sheet for each floor in the dungeon. To know where to begin drawing on the paper, you have to either draw until you know and then either use multiple sheets if you’re off or you can do what I do and save yourself frustration by using good old google xD I google someone else’s map to check where a dungeon starts, after that it’s just mapping. Sometimes I have the size measured before I begin. When I get to next floor I start another sheet and number them. If the game has teleporters I note them too, same with pitfalls etc. If there’s many you number them."

Are there games you play because mapping is more fun than playing the game?

"The game I map right now is not a very good game. Now my reason for mapping it isn’t because it’s the most fun to map since there’s so many fun ones. My reason is I’m playing it as a part of my rpg quest and no one should play it otherwise. But I will say the most fun part of it is probably the mapping. It’s satisfying finishing one of them because they get so big."

Does creating maps only work for 2D games or do you also have created maps for 3D games?

"I’m not quite sure I understand the question, but I can give some examples of what I would map and wouldn’t. For me mapping only works with dungeon crawlers where you can map square by square. I have to be able to walk a step, draw a step … Or walk and count five steps and draw five walls. It doesn’t work with normal jrpgs like say Phantasy Star II, while the original PS works. As long as it is a square by square dungeon, you can map it!"

Are there any communities you would suggest if someone is interested in starting a mapping career?

Some of her maps 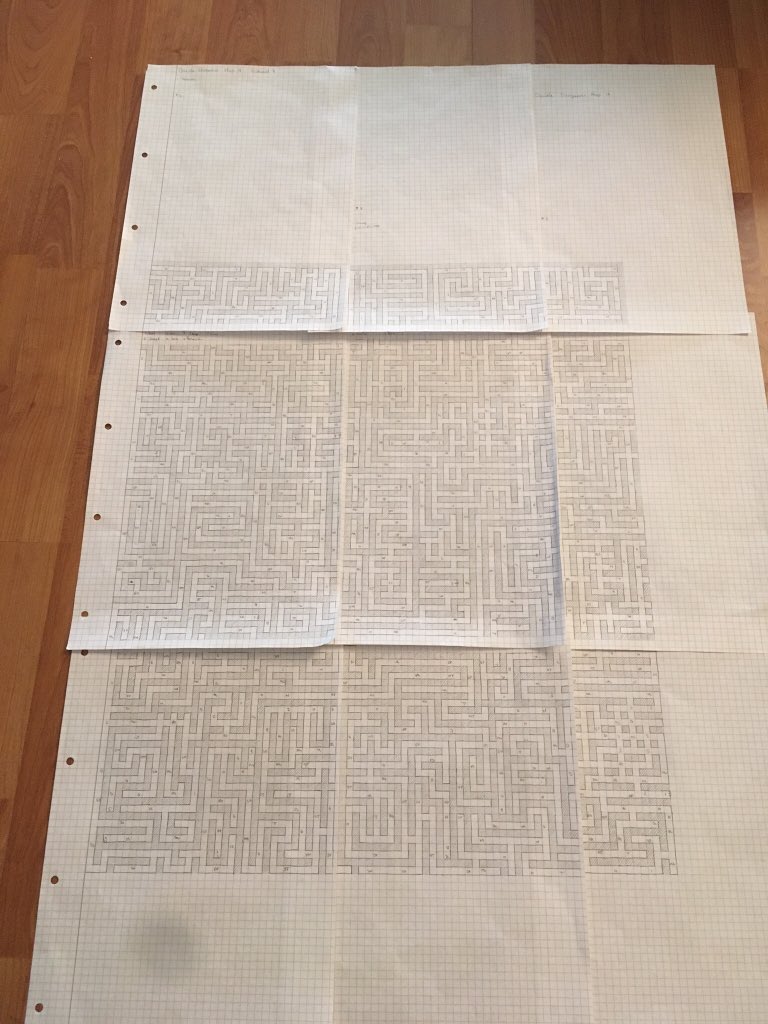 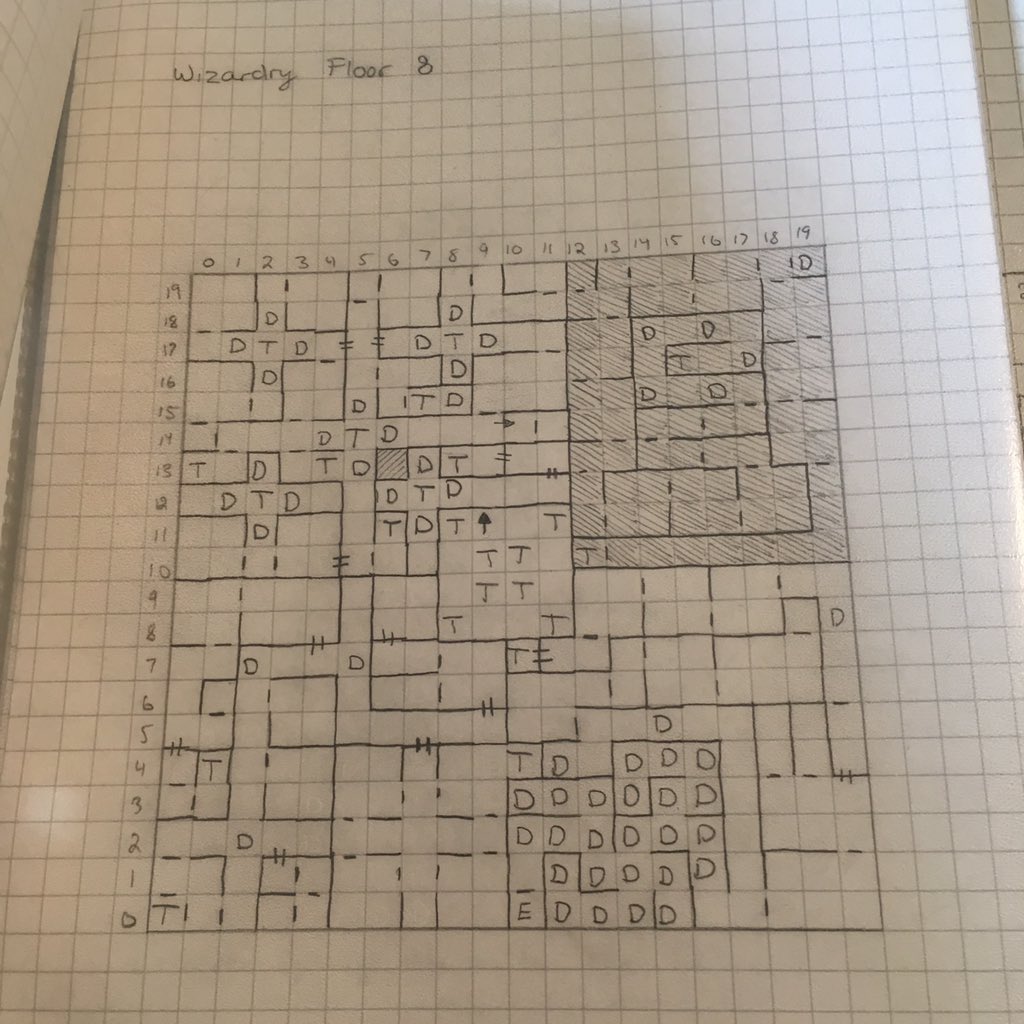 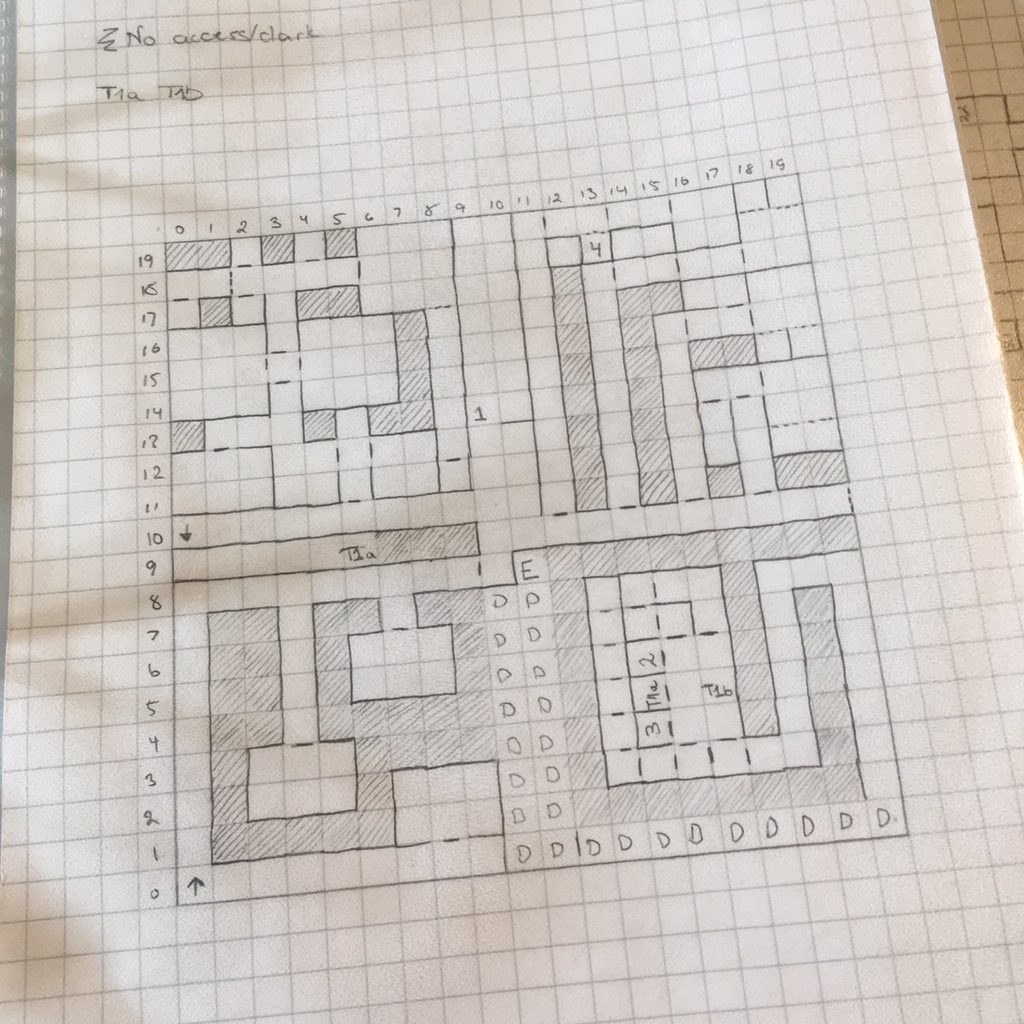 The D's are where it's pitch black. You can't see so I walk one step, write D, walk one more. Wizardry has a lot of trickery so the dungeons itself is harder to map even with the small size. While something like Double Dungeons is very easy to map, but less interesting because it's the same formula for 22 dungeons.

Here's the biggest map I have created. This is Double Dungeons. I'm working on dungeon 20 now, after that 2 more left. This is dungeon 19.

You are here: main page / coverage / art of mapping / interview