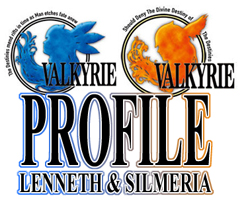 Welcome to RPG-O-Manias first double-spotlight where you're going to find pre-release informations about Valkyrie Profile Lenneth and Silmeria. In case you're wondering why both of the games are covered in one spotlight, let me explain: Both games have been announced on the same day, and since Silmeria is somehow some kind of fan-service, those games have more than the usual prequel-sequel-relationship. On top of that, you can connect the PSP (platform for VP: Lenneth) with your PS2 while playing Silmeria and you're going to receive some goodies. 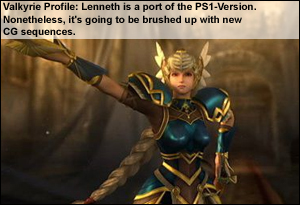 so, let's begin with the game that started it all. Valkyrie Profile was released for the PlayStation in 2000 and soon became a legend on its own. The special about tri-Ace here on the page describes the original Valkyrie Profile as follows: "It's closely related to nordic mythologies featuring the story of a goddess looking for dying warriors she could recruit for the ongoing war in the heavens. The game is so packed with innovations that it has got an excellent reputation among RPG players. There are no shops in the game, it has some kind of a time limit and a two-part gameplay - you have to gain warriors and fight evil in the lower world but you also have to train the fallen warriors in various way so you can send them to the upper world. It was one of the first RPGs that came up with various difficulty levels you can choose, and it is also one of the rare RPGs that can lead you to dead-end streets which forces you to reload a previous save or even to begin a new game. Yet with all its unfair parts, it's such a fascinating game that many players refer to it as their favourite RPG."

Sadly enough, the number of produced games was not enough to grant every fan his or her own copy. Soon after the release, the prices for Valkyrie Profile almost exploded, and nowadays it is hard to find a reasonable priced copy of the original PlayStation Valkyrie Profile. Back in 2004, rumours arose that there might be a re-release of the game on the PlayStation - however, they did not seem to come true. On december 12th, 2005, a re-release of Valkyrie Profile was finally announced. But not as a "nice price" game on the old PS1, it turned out to be a port on Sony's handheld, the PSP. 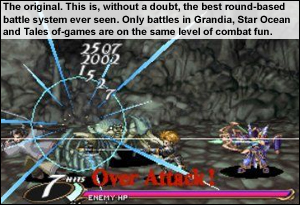 Valkyrie Profile: Lenneth, as it is called now, does not exactly follow the "PS1 RPGs converted to the PSP" path opened up by "Tales of Eternia" and "Breath of Fire III". Although the gameplay, graphics and sound remain untouched, the game is brushed up with new CG sequences, so the remake is rather to be compared with the remakes of "Final Fantasy VI" on the PS1 back then.

Like already mentioned above, along with Lenneth, there was also a new Valkyrie Profile game, "Silmeria" announced. It takes place a few hundred years before Valkyrie Profile. The games' main protagonist is Silmeria, the younger sister of Lenneth, the heroine of the original Valkyrie Profile. She somehow angered Odin, hence being forced to live as the human girl Alisha. 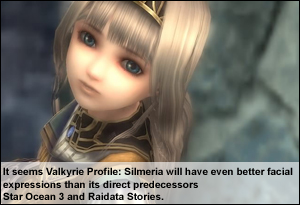 The battle system is basically the same, but a few still unnamed changes have been made. The visuals are now a quite stunning 3D scenario with lots of details and facial expressions. The person in charge for the music has not been announced yet, but supposedly Motoi Sakuraba will be in charge for the music again. Although the game is completely in 3D now, the gameplay is mostly from side scrolling, keeping up with the Valkyrie Profile tradition. Could it be that the side-scrolling Radiata Stories, also created by tri-Ace was some kind of guinea pig for them?

Although this game seems to be what Valkyrie Profile fans have been waiting for so long, the enthusiasm is not as smashing as you could have expected. I asked my fellow buddy Vio, a Valkyrie Profile fan to boots, why he's not as enthusiastic as I've expected him to be and he responded that "Valkyrie Profile was designed to be a one shot game" and that he's "not sure if Silmeria turns out to be just some kind of fan-service without the heart that has been put into the original Valkyrie Profile."

We don't know if he's right or not, but just let's hope that Valkyrie Profile: Silmeria can keep up with the high level its predecessor has reached. Vio also said that he does not want to talk bad about an unreleased game, he just wants to avoid an overheated hype. Well, it is not as if there is no room for improvement in Valkyrie Profile. Sometimes, the game was pretty unfair, and the way to reach the only good ending was almost unachievable without a strategy guide. If tri-Ace is going to avoid the mistakes made in Valkyrie Profile and creates a story worthy of its predecessor with battles as fun as they were in the original game, they're on the way of creating an almost perfect RPG. But people can make mistakes, and so the fate of Silmeria has not been decided yet.

People doubt Silmeria. I, however are quite sure that it won't turn out to be a piece of crap. tri-Ace seems to be aware of its responsibility for the brand, so I dare to say it's going to be a good game. Whether it turns out to be perfect or just decent, that I don't know though. Lenneth is surely going to be a good port, I mean, what can go wrong? I doubt the newly implemented CGs will destroy the game experience. Well, the only thing that worries me, of course is the western release. Will there be only, and if so, are both games to be released in the USA? Let's hope so!

The game has been released now, and the first previews are online. Greg from Greg's RPG HeaveN (defunct website as of 2017) was able to play the japanese version. According to him, the game has been done pretty well. The graphics run at very smooth 60 FPS, the music by Motoi Sakuraba seems to be pretty good. The most important thing is that "despite the change to a full-polygonal environment, the game experience compared to Valkyrie Profile is amazingly similar". Although there are camera turns and twists, the character is always controlled in a two-dimensional way. The battle system is basically the same, although you can now encircle the enemy before the real combat starts. "All things together, Valkyrie Profile Silmeria had a very good first-time impression on me. Since I've always been a fan of the series, I'm grateful that the game concept hasn't been changed drastically, yet there are enough innovations so that the game is not only an uninspired update." It seems you really can look forward to this game.

I got both games when they had been released, but I never finished them, they just were somehow too hard for me. They're some challenge if you're looking for one and still damn fun to play, but if you don't have the time to fight around in complex battle systems for hours just to find out the perfect strategy for one single fight, you might want to consider if you really should buy these games.