This spotlight is different from other ones - usually, all the preplay spotlights are based upon videos, user opinions or articles on other news sites. This time, however, I already played the game prior to this spotlight. Or at least part of it, since the japanese demo was released on the XBox Live Marketplace, I played the game. 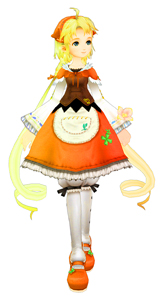 First of all, Microsoft is to criticise. As you may know, the XBox 360 is not really Japan's most favorite console. However, the japanese gamers still like RPGs quite much, and a demo of such a promising game could be a boost to the rock bottom sales of the console. So, it seems they did everything right, releasing the demo and all. But somehow Microsoft decided to publish the demo completely in english. I guess many japanese gamers are upset because there was a japanese demo of a japanese game that wasn't in japanese... this is weird. And honestly, Microsoft, that way you'll never get the XBox 360 above ground over there in japan. 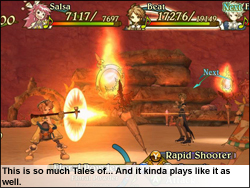 But well - this was a misplaced strategical decision, nothing that could or would affect the games' quality.The game itself is so much "Tales of", it's incredible. It looks like Tales of, it sounds like Tales of, and even the battles seem to be some advanced Tales of gameplay. The people behind Eternal Sonata are tri-crescendo (not to be mistaken with tri-ace!), the company founded by Mr. Motoi Sakuraba, who also did the soundtrack of Eternal Sonata. Speaking of the soundtrack, this games' soundtrack is something special...

Eternal Sonata's story has a totally depressing background. Frederic Chopin is awaiting his death in 1949 and dreaming his last dream which turns out to be an adventure of the young girl "Polka" and her friends. The game itself is peppered with various tunes composed by Mr. Chopin, but most of the soundtrack has been composed by Mr. Sakuraba, as previously mentioned. As far as I can tell from the demo, it's not Motoi's best work so far, especially compared with his recent masterpieces in Baten Kaitos or Valkyrie Profile 2: Silmeria. 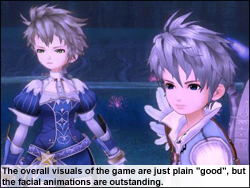 Graphics are beautiful, but the fixed camera is annoying these days. The game deserves praise for having such great facial expressions, but the visuals coule be screenshot 3smoother. The gameplay seems flawless. The gameplay is action-based, but unlike in the Tales of games, you have a 3D field beneath your character's feet. As soon as you begin moving, a timer begins and gives you five seconds for all of the turns. You can now choose if you smash on your buttons and place as many attacks as possible, or you could use time-consuming specials or other things. If the enemy has its turn, you can choose to block the attacks if possible. It's a quite interactive battle system, no revolution, but overall fun to play. You have to like action based battle systems, though.

Although the game has been created by a company called "tri-crescendo", it plays so much like an tri-ace / Namco Tales game. I cannot confirm it yet, but I could swear that "Eternal Sonata" or "Trusty Bell", as it is called in Japan, is basically from the people that brought you Star Ocean or Tales of. Anyway, this game seems to be fun to play - if you liked Tales of, you'll surely like Eternal Sonata as well. However, if you had your share of frustration with any of the mentioned games, I don't think you'd be happy with Eternal Sonata as well.

I purchased this game back when it was eventually released on the PS3 back in 2009 and I played it together with my nephew through the winter 2009 to 2010. It was a nice and great experience, multiplayer was well executed and it was some memorable experience. Tri-crescendo continues to develop Tales of-Games, a sequel to Eternal Sonata was never to be released.