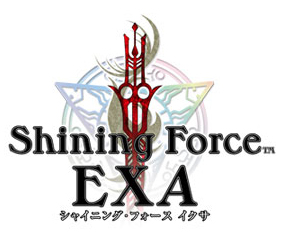 After the success of Shining Force Neo, Sega decided to let this new Shining-brand have its successor. Now, Shining Force EXA has been announced for a North American release on March 20th, 2007. It's said to be the same action orientated RPG type the predecessor already is. However... old Shining Force fans deeply hate this game. Why and how is described later in this article.

First, the game itself

"Shining Force EXA" plays in a world politically torn apart by a long and devastating war. Two nations battle each other fiercefully by summoning demons and other vile beings. Years after that, none of the parties has won, but all the inhabitants are absolutely exhausted. Shining Force EXA gives you the possibility to have two playable characters. Toma has the ability to wield the sacred sword Shining Force and Cyrille, a sorceress who fights to bring salvation to her homeland. 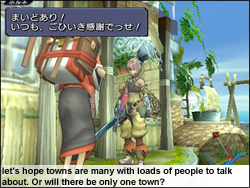 The game plays pretty much like "Neo", which means that the gameplay is more of the hack and slay type, however not Dynasty Warriors style, it's still an action RPG. There is also the possibility to create a fortress which has to be defended at some points in the game. This sounds a little Suikoden-ish. But overall, people who were able to play the preview-version said that those who liked "Shining Force Neo" will most probably also like "Shining Force EXA". The japanese gaming magazines Famitsu and Dengeki also granted the game quite high scores.

Aside of that, the game has neat visuals and nice character designs. The plot itself is said to follow the general rules of japanese storylines often seen in animes, mangas or many other RPGs. However, it is to be expected that the game will be mission-based with just one central town to venture in, meaning the world won't be free to venture around as you please. All things considered, there's a good game to be expected with various missions, nice ideas and a solid hack and slay gameplay. But why do Shining Fans despise this game so much, as previously mentioned?

Why old "Shining" fans hate this game so much 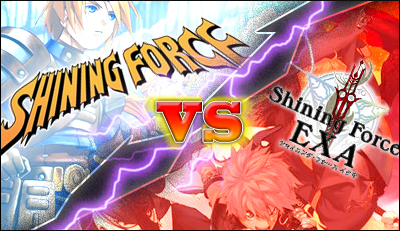 As you may know, Shining games published by Sega have quite the long tradition. The first game of this long-lasting franchise was "Shining in the Darkness", developed by Climax, published on the Sega Mega Drive (Genesis) in 1991. This game was a classic dungeon crawling RPG with 3D dungeons and one central town where you could buy equipment and talk to people. Following this game came what made the series big - "Shining Force". The game system turned from a 3D RPG to a 2D top-down strategy RPG. The game, however did things other games of that genre did not. There were various towns to visit, you could stroll around freely in areas where there were no battles and your party did not consist of soulless palette swapping no names, on the contrary, there were 30 individual characters waiting to be recruited by you. The following game in the series was "Shining Force II", another strategic RPG and a big improvement to "Shining Force". The game was one of the most RPG-ish strategic RPG ever produced. "Shining Force 2" includes Individual characters, a completely open world, tons of different towns and a dashing storyline.

However, after the release of Shining Force II, Sega released the Saturn console and decided to release some new "Shining" games without "Force" in the game's title. Those were "Shining Wisdom", a decent hack and slay action RPG with 2D graphics and "Shining the Holy Ark", a first person RPG game that roughly followed the gameplay of "Shining in the Darkness ", but already prepared gamers for what was to come, story-wise.

"Shining Force III", this time developed by the newly created company Camelot was the biggest Shining Force game ever produced. The game consisted of three scenarios, giving the gamers different views of the same story, thus avoiding serious cliches or logical errors (by the way, this idea was adapted by Konami a few years later with Suikoden III.). However, this game also started the long struggle downwards which now results in the bad feelings old "Shining" fans do have towards Sega and the new "Shining" games. Of the three "Shining Force III" scenarios, only one was released outside of japan, leaving the story unfinished to most western Shining Fans. They pledged and plead for a translated version, first for the Saturn console, then for a compilation on the newly released Sega Dreamcast. But the staggering Sega company did not react to their calls. Even a big petition launched by the biggest Shining Force fan page and its webmistress did not lead to success. 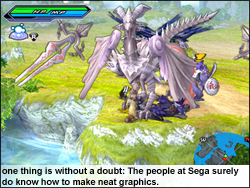 Eventually, Sega's console division was closed, after the debacle with "Shining Force III" Sega and Camelot parted ways (Camelot developed the very famous "Golden Sun" games later on), and Sega became the third party developer we know nowadays. Later on, they also released new games for their "Shining" brand, "Shining Soul I" and "Shining Soul II". They were decent, but not outstanding action RPGs for Nintendo's Gameboy Advance handheld. After the "Shining Force III" disaster and the mediocre "Shining Soul" games, the love of the fans cooled down and vanished. Even "Shining Force Central", the big website mentioned above died.

But then, in 2004, things seemed to get better again. A remake of the original Shining Force was announced for the Gameboy Advance, called "Shining Force: Return of the Dark Dragon". It was said that people behind the original Shining Force helped developing thee game, and it turned out to be a very good game with some nice additions to the original story and some new characters. However... the Shining Fans already changed their reactions to the series. Whereas they acceppted every game gratefully in the past (even the rather simple "Shining Wisdom"), they were extremely sceptical about "Return of the Dark Dragon". And as it was expectable, the game did not meet up with their expectations - the newly added story, the more colorful scenario, the new characters, the new additions to the battle system... many things displeased the fan base.

The straw that broke the camels back was a game that was named like the game the fans were awaiting so much. "Shining Force Neo", even including the original "Shining Force"'s hero, Max. However, the game was not the strategic type of RPG, rather than that a three-dimensional action RPG. What the fans wanted was a turn based combat system, not some easy to perform button mashing action. Although the game was good and even earned some good scores in reviews, the "true" Shining Fans declared the series to be dead.

And now, the official successor to "Shining Force Neo" was announced - "Shining Force EXA". If you stroll around the "Shininig Force Central" forums, you don't need to search for a long time until you see dozens of topics why "EXA" will fail or is not even worth the attention. Some fans refuse to even inform themselves about this game, some others criticise what Sega has done, others who read information or articles about this game get even more frustrated the more information they get. One of the most criticised statements made by the developers of "EXA" was the one mentioned above - "We wanted to modernize the game mechanics". Fans don't think of a modernization when it comes to change what made the series big... for them, this step is just a commitment for the mass-market, which obviously does not like overly complex game.

However, there are fans who actually give the game a chance, since they tried out "Neo" and liked it or they just accept that the series has always rotated genres and will do so in the future as well. Our inhouse "Shining" fan Bowie said: "I'm not really against EXA, I think it will be a good game, but I also still hope that there will be a round based Shining Force game in the future as well...". It is a fact that "EXA" received great scores in japanese game magazines.

The decision was a hard one and required quite some discussion with some fans of both sides. In the end, I decided to be opimistic, although I am an old "Shining" fan who is just waiting for a new strategic force game to be released. However, the series always undoubtly changed the genres of its games. I know that "EXA" is a "Force" game, which once stood for strategic, round based RPGs and that Sega really played fast and loose with their dedicated fans. But this is no question for people who don' know the old games. They can expect a pretty good action rpg. As for the fans... I don't think many can live with a good game that they already prejudged. So "Shining Force" indeed seems to be dead for those who don't want the new games to live.

What was described here as a positive outlook turned out to be one of the biggest destructions of a video game series that could possibly exist. After EXA, the series mostly consisted of shallow fan service games or remakes on mobile phones.

Sega itself almost ceased to create good games, with only a few examples remain. The Shining series lived on by its fans who translated Shining Force III for the ambitious gamer. However, the series itself seems kind of dead.

The biggest website of that game series, Shining Force Central, also stopped updates and only seems to be updated when money for the hosting fees need to be collected.

The series truly lies in shambles. And EXA did its part. I wouldn't have expected that back in '05.