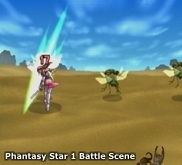 One thing that's worrying me is that the announcement of a Trilogy in western areas could be worthless. What makes me come to this thought is the fact that the first release date of Q1 2005 has already passed, and even in Japan, there has only Phantasy Star II been released already. This means that Phantasy Star IV might take some while in Japan, and considering western conversion might take some time, it seems that this game might be released somewhat in 2006 - the estimated release of the PS3. I wonder if anyone will take the risk of releasing 2D Remakes of old games, no matter how great they are?

And they are damn great! I got my hands onto the japanese version of Phantasy Star 1. Despite the fact that due to language issues I'm unable to save the game, I really love it. The 2D graphics are great, detailed and well-animated, the Battle system is enhanced and the scenes have been re-drawn. It's just great! The same is to be expected from Phantasy Star 2, where battle scenes finally got real background graphics... Let's all speak our prayers that these remakes actually will be released, just as promised. I think every Phantasy Star Fan would love them! 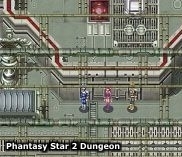 Graphics: Even if there's (almost) no 3D, the graphics are really nice. The atmosphere of the originals has been conserved, you always feel that you're in the Phantasy Star game of your choice. A good point is, that Phantasy Star 2 got "real" battle backgroudns now.
Sound: The music is remixed and sounds quite good with its new style. It's really state of the art.
Gameplay: Gameplay remains mainly untouched, with some minor concessions to the modern time. For example, in Phantasy Star 1 you are now able to attack the enemy you want. You're not dependant of the randomized timer anymore. You also actually see in battles how much enemies are in front of you. In the 1988 original, there was just a counter how much enemies are taking part in the encounter.
Overall: I really hope that the Trilogy will be released. But to be honest, I don't really believe in the release. It's just too much of a dream, that a 2D remake of some of the greatest RPGs ever made will come as a compilation into the western world. Hope never dies, the games would be worth it!

As predicted, the trilogy never came out. There was even no remade Phantasy Star IV in Japan. So there is almost no chance to relive the fate of the Algol solar system in one collection. You can buy the Mega Drive (Genesis) collection, at least Phantasy Star II and IV in their standard forms have been released there. No remakes in the western world, though.