Lunar fans really have to be patient. The first installment of the game, 'Silver Star' was released back in 1993 on the Sega Mega CD, its successor 'Eternal Blue' in 1994 on Sega's luckless Mega Drive (Genesis) addon. The following Game Gear part was the last 'original' Lunar before the great period of remakes started. (Reference to the Retrospective section to gain more information about the history of the Lunar series.)

Now, ten years after the last original Lunar, a new sequel to the series has been announced. Well, it's more like a prequel since it plays 1000 years before Silver Star. Beastmen are the dominating race in the world of Lunar back then, and they're treating all the other 'inferior' races with malice and derision. No one knows yet that the Vile Tribe out in the frontier prepares to conquer the world with black magic. The hero Jian, his friend Lucia and eleven more compagnions have to face what happends in Lunar: Dragon Song. 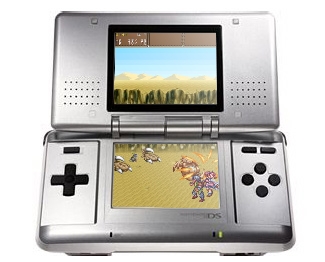 Graphics have changed, using the twin-screen possibility of the DS. The style reminds me a lot of Lunar Legend (GBA, check out the review here), but it's a little more grown up now. This time, the DS has to prove if it really has the power for a real RPG.

The battle mode has changed drastically. Like in Lunar Legend, there's no "in field"-battle anymore like it was in the prior Lunars, where your character moved first before he / she was able to attack. The most important part is that there are two styles of battles available in Lunar Legend: Normal and Virtue. In Normal mode, you won't get experience, but items at the end of a fight. In Virtue mode, you'll get experience and as an addition, the monsters beaten won't show up on the map anymore, as long as you stay in a specific room. Battles are "stretched" to fit both screens, so you'll see flying enemies on the top screen and ground-based enemies on the bottom screen. Times where you took control of up to five characters in battle are now over, your battle party is maxed out with three heroes. 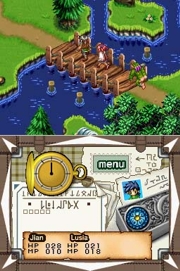 Fans are either euphoric about what's been announced yet, or very skeptical. Statements like "Lunar is known for its epic Anime-FMVs and its excellent (japanese) voice over, both will most probably not apply to the DS Lunar" roam the net. The point is, Lunar was always known for its neat anime scenes, but is this the essence of the game?

Graphics: The 2D graphics are nice, but they look kind of low-colored. But overall, the game looks pretty decent.
Sound: Not much is known about the soundtrack yet, but it will probably be made by Noriyuki Iwadare again, who created the famous soundtracks for the previous Lunars as well
Gameplay: The gameplay seems to be a evolution of what Lunar Legend presented us three years ago. The Virtue System seems to be a good addition of the game, multiplayer matches will be also available
Overall: I'm one of the rare Lunar fans who thinks Lunar Legend is better than its Anime-filled predecessor Lunar: Silver Star Story - so I look forward to Lunar Genesis, since it looks more like a successor to Lunar Legend than to the classical Lunars. It depends on you if you like that or not.

The game was released, and I was eagerly awaiting the game to arrive, so that I can play through the whole thing, review it and celebrate the return of the Lunar series. Alas, I was not able to finish this one game. Design problems are to heavy to play through the game.

The three main problems are that equipment is absolutely overpriced and that you have to take silly collecting jobs all the time just to buy new equipment. Then again, enemies easily can break your equipment, that means you have to save before almost any battle later on. And then, there is the problem that you cannot decide which enemie you attack.

It's a game that received lots of love during its development. But the game designers made a few too many heavy mistakes.