Final Fantasy III, the only Final Fantasy not released outside of Japan was announced to finally arrive in english speaking areas after 15 long years in October 2004. However, unlike many other ports of older installments before, Final Fantasy III was announced as a handheld game completely redone with new graphics, music and gameplay - right on the Ninendo DS. What can players expect from this strange combination?

Of true and false third parts 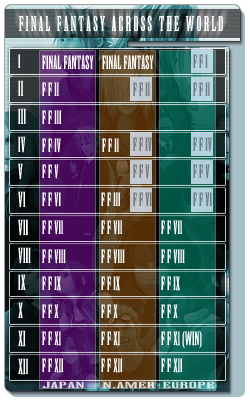 Only Sqaure Enix knows why Final Fantasy III has not been re-released earlier. Of course, the original game was a "slightly" outdated NES game, but with the first two Final Fantasies being re-released on the PSOne, Wonderswan Color and Gameboy Advance systems, not even this excuse was acceptable anymore.

Maybe it was the Northern American success of Final Fantasy VI - also called "Final Fantasy III" when it was first released that the original III was not being remade for such a long time - this remains speculation though, we will most probably never find out the reason for the delay. Maybe there was just no more place for a remade NES game anyway. 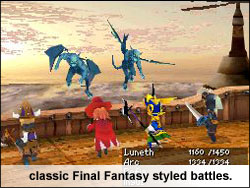 However, the abscence of the game in the western regions for such a long time turned out to have advantages after all. The remake which was announced in 2004 became an almost new Final Fantasy game that introduces a new style of Final Fantasy game while being part of the main series. The new style is not so much of a surprise, Final Fantasy III DS was only supervised by Square Enix, the game was developed by Matrix Software, a relatively unknown developer of videogames.

The game, however, always tries to be a true Final Fantasy game. The intelligent job system of the original game was ported to this new version, as well as the round based fights and most of the storyline. This time, however, the characters have different personalities, and you don't start with all four of them at once as well. The crystals around the world are still dying, but now the reasons of the bad guys as well as the way how to get rid of them is much more mature than it was in the original. 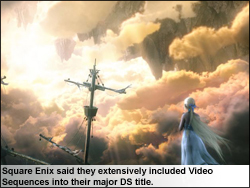 Besides all these changes, the most impressive one is the extensive use of videos on the Nintendo DS system. So you could really say that Final Fantasy III is the first true Final Fantasy released on a Nintendo console since 1994 when they released... yes, exactly, Final Fantasy VI, which was known as III back then. Funny, isn't it?

The soundtrack of the game is astonishing. The melodies, originally composed by Nobuo Uematsu, were remixed by Tsuyoshi Sekito and Keiji Kawamori in a brilliant way. Judging from the sound quality, you can barely believe you're listening to a DS tune - even if the DS soundchip prove beforehand that it actually was capable of some good melodies.

Up until the end of Semtember, 2006, the game was out for about three weeks and already sold over 700.000 times in Japan. So there's no real need to worry that the game - although not developed by Square Enix themselves - would be crap. As reviews around the net imply, Final Fantasy III DS is a pretty good game, although not as astonishing as the newer Final Fantasies. This is mainly because the game is relatively difficult and the story moves forward in a high speed. Some who have already played the game do think that this port more attracts old school RPG fans rather than other kinds of gamers. The only risk that's still threatening the western game experience is a messed up translation. But as far as people can tell from demo versions, it's gonna be okay.

I purchased this game and played it, but honestly, i was... whelmed. The graphics were nice back then, the music composed and played well, but the game itelf was a NES RPG at heart. There was not much story going on, there was lots of grinding and often enough I didn't know where to go. It was okay, but I never finished it.