"In order to survive, mankind must evolve" is the motto of this new Square Enix franchise which is going to consist of mangas, animes and video games. The scenery of Code Age Commanders is a world which self-destroys itself every 10.000 years just to be reborn. The people living in this world tried to escape this vicious circle by using a gigantic spaceship / station.

Things didn't work out well and Jean, our main character tries to search for his sister Alize who was also on this station when it failed to escape - she had been on the station when it collapsed and was kidnapped by a strange creature soon after.

The world is currently in the process of re-generating itself and uses special creatures to convert humans into entities without a free will who will take care of the worlds' recreation. Jean also falls for these creatures, but he won't turn into one of the will-less beings called "Coded" - he is stuck in-between in the process of a human turning into a "Coded" and becomes a "Warhead" - creatures whose bodies are already more powerful, but still can act on their own free will. 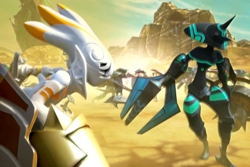 The story is quite revealed right now, but nothing else is known about this game. All we know are some people behind the scenes: Toshiyuki Itahara who did the caracter artworks for Final Fantasy XI and Final Fantasy: Crystal Chronicles also worked for Code Age Commanders. Finally, Code Age Commanders has been released in Japan, and we of RPG-O-Mania, known for being curious about Code Age Commanders imported the game on our own, so there is a detailed prediction here.

Of course, playing this game is hard. There's lots of text and explaination of the game and the story you don't understand unless you're capable of reading japanese. The game starts surprising, after a neat video you're already stuck in the game which looks like a dream while you slash some little monsters as a impressive "Coded" creature. After this scene, you'll first meet your little helpful comrade who explains the controls to you - right after that you notice that the game is obviously mission based, you can fight and gain scores, quite old-school. Well, if it wouldn't be for all those gameplay innovations and unexpected gimmicks that make Code Age Commanders different from other action RPGs. Confused for the first hour, you're soon going to get into the game system - and it's very much fun to play! You can imagine the gameplay as a mixture of style games such as Devil May Cry, Fighting Games similar to Tekken and Action-RPGs. The game resembles Final Fantasy: Crystal Chronicles a bit in the latter.

It's such a pity that I don't understand anything of the story (which is explained in neat real-time scenes with motion capturing as well as stylish flashbacks), I would love to play the game here and now to the fullest. Let's only hope that Square is merciful enough to translate this game.

Square Enix eventually gave up on releasing this game in western regions. The game sold horribly bad in Japan, so the decision makers obviously decided to ditch the whole brand, sadly enough. You might want to import this fine game, there's an international version out there which comes out with an english manual. There was never ever heard of Code Age since the mid 2000s.