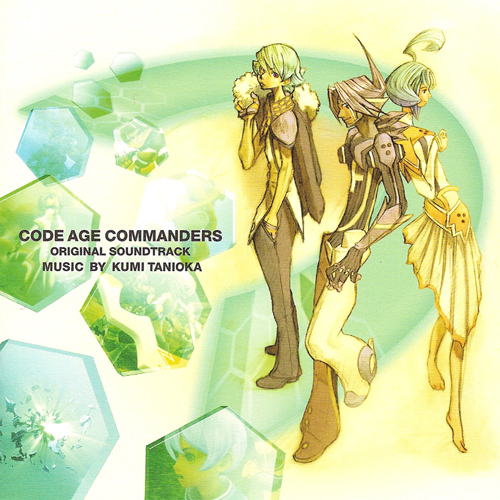 This soundtrack took some time until it arrived here. It seems the whole Code Age-brand is quite the underdog. The game is quite affordable just a few week after its release, the soundtrack however is quite hard to get. It seems Square Enix did not produce too many of those discs, or people know the brand not well enough to buy the soundtrack. The game itself (described here) is very progressive and takes place in a surreal futuristic setting. As futuristic as the game is, is the soundtrack. Most tunes have intense beats and give the game a aseptic, cool but still fascinating atmosphere. Sometimes, the soundtrack reminds of former sci-fi games like Phantasy Star 2, 4 or online. The whole soundtrack sounds like a modern, upbeat version of Final Fantasy: Crystal Chronicles spiced with stylistic elements of Phantasy Star Online and its Mega Drive predecessors.

The soundtrack itself is quite expensive (around 40 €) but comes as a 2-CD-box with impressive 80 tracks. Most of them are around 2 minutes long, some are remarkably longer (up to four minutes), some are shorter.

The first disc contains mainly gameplay themes. Most of the tunes are level background melodies, there are also the stage clear and mission introducing melodies there. Even without having played the game, the atmosphere created by the tunes is quite impressive. The music feels like it is from a far distant future or another world. Especially tracks 17, 15 and 24 are good examples of this.

Disc two consists of character themes, backgrounds of story sequences and the final battle musics. Even though this CD contains heavy spoilers, I recommend you to listen to it. The tunes on this disc are even better than the ones on the first discs and are very enjoyable. Some tracks are getting quite fearsome, sometimes the style shifts to industrial, but it stays melodical all the time. Tracks 30 to 33 are decisive battles, very intense with lots of beat and melancholic melodies. Another speciality of the second disc are the themes of Yasuhiro Yamanaka after the ending music. They play while menus and explanations happen throughout the game, and they're quite different vom Kumi Taniokas tunes. The beat is harder, and the melodies is more like from classic games. The additional remixes of Ritsu Mizutani at the end of disc 2 are funny, but I found them a little weird. Well, they're okay for a bonus.

The sound quality of the two discs is very good. Sometimes, I wished the beats would have hit harder. Especially without audio equipment that has a bass booster, the tracks sound a bit flat. Better sound recording would have resulted in a even better ranking. The melodies, however, are just great if you like this style of music, so the soundtrack is recommendable without any hesitation.