The legend of Zelda: Twilight Princess 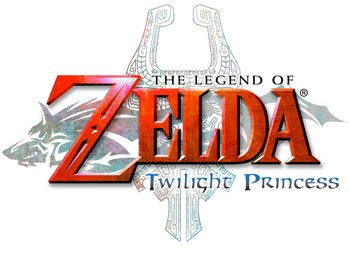 Nintendo revolutionized the genre of action-adventures with the first Zelda game, and even today, many action-adventures are still geared to the games. Almost all of the Zelda games have been produced by Shigeru Miyamoto. Twilight Princess has been released in 2006, and this game bears a lot of importance to Nintendo's new game console Wii. The following review tries to give you an impression if the game can come up with the high expectations.

Twilight Princess was scheduled for a much earlier release, since it has originally been developed on Nintendo's GameCube console. To have a game that gets the people to buy the console, Nintendo decided to postpone the release on the GameCube, port the game to the Wii console, added 16:9 and 480p support and integrated the new controls. 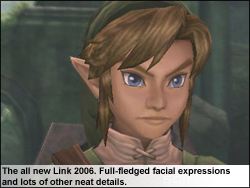 Again, it is Link who is the main protagonist of the game, and again it is the fate of Hyrule and Princess Zelda that Link gets struggled into. Zanto, the court magician of the Twilight World can't bear his fate and some events in the past, thus trying to subordinate the world of light.

The gameplay of Twilight Princess is rather well-known. Link, only equipped with a with a slingshot at the beginning gets involved in all the tragic events of Twilight Princess and tries, along with the mysterious Midna, to free the world from the great evil force. One of the main aspects seen in Twilight Princess has already been used in the series once: The interaction of a "light" and "dark" world, where people transform into something else when they enter the dark world. This is an idea adapted from "Zelda III - A Link to the past". Link gets support from his horse, Epona, and the previously mentioned Midna, a being from the twilight world, who obviously has to settle scores with Zanto as well. 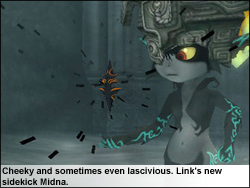 The game has been adapted to the new Wii controls. While you control the sword by swinging the Wiimote, you move link with the analogue stick. Targetting with various items like the grappling hook, boomerang or arrows is also controlled with the Wiimote. You can still auto-lock enemies using one of the buttons though, which seems to be especially useful with fast enemies. Maps and item screens are also available by pressing the varrious buttons on the Wiimote. At the beginning of the game, the controls are explained in a cautious way, after a couple of hours, the controls are very easy and intuitively used. Like already mentioned at the beginning, the gameplay is classic Zelda gameplay. Link gets new items and abilities by exploring the obligatory dungeons or doing some bonus jobs. 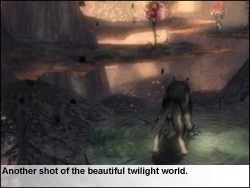 In the twilight world, Link becomes a wolf where he can not use any of the items found in the dungeons. However, being a wolf he got some more abilities unvailable in human form. For example, Link can now detect various odors or dig loose ground. He can also communicate with any other anmials. Whenever Link transforms into a wolf, Midna becomes his jockey, she can also beam him around or teleport heavy obstacles across Hyrule. The adventure leads Link to various locations - the diversified regions (desert, water temple, snow mountains, twilight palace) are beautifully designed, foe and friend alike are very good animated. The bosses are among the best of the series. Alas, the blurry textures always remind you of the GameCube history of this game, the new hardware is never really challenged. However, on the other hand, you'll never notice any slowdowns or framedrops. The sound is quite traditional, nice melodies played on a rather weak instrument range. But on the other hand, this gives the game kind of an own flair, so depending on your tastee, this don't have to be an disadvantage. Some of the melodies are incredibly intense, creating an atmosphere never seen in any Zelda game before.

In previous Zelda games, many of the challenges Link had to do between the dungeons were the main aspect of the games. Twilight Princess, however, shifts the main gameplay in the direction of dungeon exploring. The dungeons in this game are more important to the overall gameplay than in other Zeldas. They are more intense than in the prior Zelda games as well. The downside of this atmospherical shift in game play is that Twilight Princess is one of the most linear Zelda games, and not too hard on top of that. Experts of the series will hardly see the game over screen. There have also some new ideas been added to the dungeons, like a dungeon where a couple lives in.

Never before there was such a big Hyrule castle town, the castle square is as lively as never before. One who takes his time can notice countless affectionate details. There are some new places like the lost village, which reminds of some cliched western movie. At the beginning of the game, you have only limited access to the world, but at a certain point, the player gets unrestricted access to all the areas of Hyrule. The storyline is always bound to some specific characters, who play more or less important roles while the story goes on. Especially the flashback scenes, where Midna talks in some Panzer Dragoon-like language are an enjoyment. But overall, the storytelling has so much improved since the last major Zelda game. 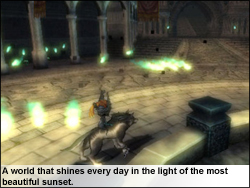 The predecessor, Wind Waker has split the fan base with its unique cel shaded visuals. Now, Twlight Princess wants to be the game many fans had been waiting for. Depending on your Zelda experience, the game can be pretty easy. Especially the boss fights are very quickly done. But even if you rush through the game, you should require at least 30 to 40 hours until you see then ending credits. Players who have searched for every gimmick in the game can reach the 80 hour mark without any problem.

Wasn't there supposed to be a GameCube version?

About one week after the release of the Wii-version, Twilight Princess also hit the stores for the GameCube, the console it was originally designed for. The main difference is that the world has completely been mirrored (or rather: The Wii-version is completely mirrored). Even with the missing 16:9 mode and some framedrops here and there, the fun is almost idendical, since the controls are done marvelously there as well. The game even has one advantage in comparison to the Wii version - the camera can be rotated freely now. Depending on your budget and your preference in game controls, you can choose one of the versions without having a remarkable disadvantage.

Wasn't there supposed to be a HD remake? 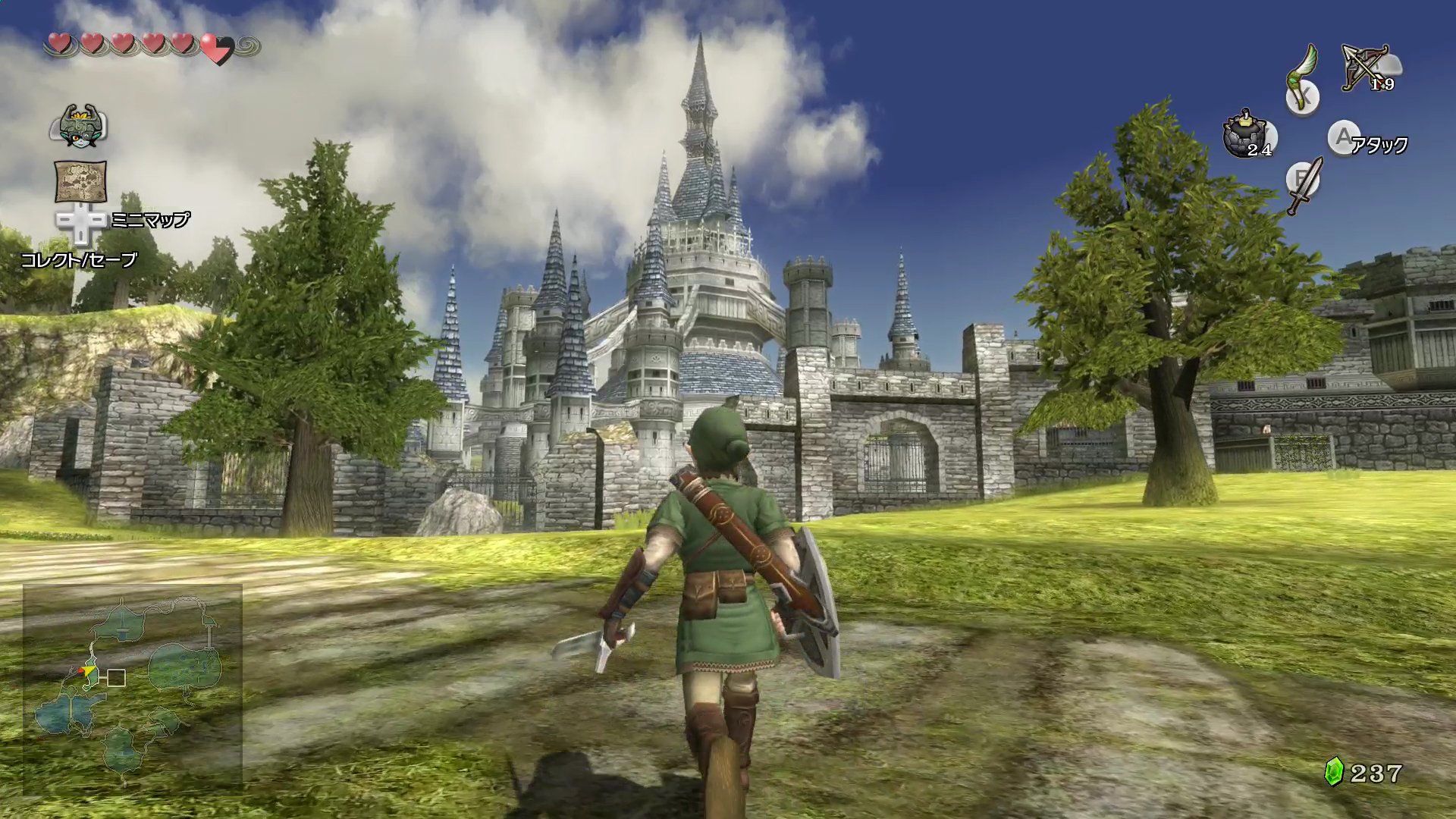 The review was originally written in 2006, some time after the games' release on the Wii (which I got upon release). In 2015, Nintendo released a "HD" version of Twilight Princess: The game was ported to the WiiU console, now with 720p HD ready visuals.

Link's character model was updated a bit, but other than that, the visuals remained mostly the same as they were in 2006. The textures were a bit sharper, and the blurry effect in the twilight world was toned down a bit. The game was shown in the original GameCube direction, and contorls were reverted back to a classic control scheme.

The WiiU's control pad display showed a map and menu screen. Gameplay was substantially easier in that version, as the button controls turned out to be much easier to use than the Wii's motion controls. The rating in this review is based on the Wii version, add an additional 3% for the convenience and visuals of the WiiU version.

It's a great game that always shows you where it came from - the GameCube, Wii's direct predecessor. The gameplay is incredibly marvelous, has a very intense story (especially for it being a Zelda game) and interesting characters. However, the rating could have been so much better if Nintendo just had done a better job in textures and sound quality.

I like how the general atmosphere is more somber and toned down in comparison to the other games in the series. I personally never liked "Ocarina of Time" a lot, and this game was what for many people was the N64 game - an intense experience with great locations, great dungeons, great items and lots of characters to love.

Personal positive: For a Zelda game, this one has an interesting story with some intense moments.

So here's the opinion on Twilight Princess by someone who's not much into Zelda, for whoever is crazy enough to find it relevant. Is it the game that changed my mind? Absolutely not. Twilight Princess is not a bad game per se. But it is quite boring.

There are some cool new dungeon items and their usage, but the whole of the game just isn't very exciting. It almost feels like Miyamoto got mad when everyone hated on Wind Waker for the cartoony look and demanded a Zelda in line of the GC Tech Demo. Here's your "mature" Zelda, with half thought through designs taken from Shadow of the Collossus and Okami. With a sickly brown-grey filter on everything. On top of edgy dark designs that don't mean much. A badly paced first half making the game too long. And on the Wii with a so-so at best control scheme. It's all quite underwhelming.

Personal negative: Half assed story with the cooler areas being not well integrated.

This game has caused some different opions here. For DocOwer, it is one of the greatest games within the Zelda franchise and easily earns a whopping 91%, for Kaoru, it was a rather underwhelming experience and he would grant 70%. The biggest differences were in the story department: DocOwer thinks it has great moments and characters, and Kaoru was rather disappointed and thinks the story is not really worth mentioning. The average of both ratings is about 81%, which barely saves the "Classic" badge.