Bandai Namco - Tested on the Nintendo Gamecube in 2005

The world of Sylvarant is in shambles. Due to the lack of spiritual energy - called 'Mana' - the crops are a failure, and the race of half-elves terrorizes the human majority. The people are waiting for the chosen to receive her oracle so she can save the world. At least that is what the legends say. In the village of Iselia, the chosen already has been determined. A girl called Colette was born with a Cruxis-Crystal in her hands. Now she is 16, friendly and clumsy as well. During a normal day in school, suddenly a light appears - the oracle she has been waiting for her entire life. So she goes on a journey for world regerneation along with a group of protectors, scholars and friends. But is it really that simple?

Nah, it's not. The story is deeper and more intelligent than you would assume at the beginning. But the game is also very sensitive to any kind of spoiler. So if you want to experience it, it's recommended not to listen to people who already finished the game. But wait a sec, you can still read this review! 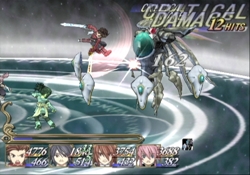 Aside of the story, Tales of Symphonia comes with a pretty neat gameplay. During the evolution of the Tales-Series, the gameplay became pretty perfect. The battles are very fun to play - the real-time battle system along with the variety of tactics and the decent AI puts ToS to a class with Star Ocean 3. Dungeons are relatively short (exceptions do exist of course) and consist mainly of box-, switch- and maze-riddles. These riddles are pretty intelligent, but if you don't like them, be warned.

Graphics are very beautiful in this game. Well, except of the world map, but beautiful cities, dungeons, cel-shaded characters & enemies as well as lots of action during battle (with a constant and very high frame rate) easily come up for that. The game is visually very impressing.

The sound is pretty good either. The instruments used lack bit of authency, but the melodies are so well done, you don't really care if the chorals have been made using a synthie or not. Motoi Sakuraba and Shinji Tamura really proved that they're a good team. Sound effects are well, and in most of the cut-scenes, the characters got a voice-over. It's not as movie-like as in many modern RPGs, but with a bit of training you can let it sound almost like it's a movie.

Tales of Symphonia is a ageless RPG. The story is a bit strange at the beginning, but later on, it's getting really deep and mature (even with some cringy moments). Along with the great melodies and the beautiful graphics, Tales of Symphonia is almost a masterpiece. What's even better is that the game was released on Nintendo's Gamecube first. What's negative about Tales of Symphonia are the poor world-map graphics, and gameplay-wise that often enough you run around in search of your next goal. A map where the towns and places are already marked should be something that exists in the first play. Aside of that, there's nothing much negative to report.

You are here: main page / reviews / tales of symphonia