Star Ocean: Till the end of time 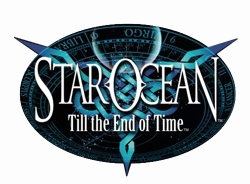 The setting of Star Ocean is our universe. In the distant Future, at SD 771 (SD 0 was sometime at 2500 AD), many Planets in our galaxy are colonized. Humankind has spread throughout the universe and met other humanoid living forms as well. Yet, even these modern times are not peaceful. The successor of the United Nations - the Pangalactic Federation - is at constant war with the forces of the Vendeen Empire, and on top of that, the mixed-race Aldian forces are always taking part in this crisis too. Fayt Leingod, an 19-year-old human from earth, doesn't suffer much from this war. His parents are renowed genetic and symbological engeneers and they can afford going on a vacation to a holiday resort planet with their son and their niece. One day, the vacation suddenly ends as the Vendeen are attacking the resort planet...

Star Ocean comes as a modern real-time RPG. During Battles, you can control your character freely around in a big areal. The battle system is really complex - you've got two types of attacks. "Strong" attacks consume much "fury", but cannot be blocked. "Weak" Attacks are faster and consume less "fury". What's "fury", you may ask? Well, you can see it as the fitness of your character. Every action you do consumes a procentual amount of fury, but if you just stay around, your fury increases back to 100%. With a 100% fury, you can even block weaker attacks from your enemies. Aside of these basic functions, the battle system of Star Ocean 3 also includes the possibility to set certain skills, or replace it with attacks. A speciality is the bonus-battle system. If you fight well against strong enemies, a gauge on the right side of the screen will be filled. Once it's full, you'll get extra rewards at the end of the battle (like double Money or triple EXP). If you aren't hit by a strong attack, you can chain bonus battles. If you do this wisely, you'll get leveled up quickly. Aside of that, Star Ocean 3 is a normal RPG with towns, people, shops and mini games.

Normal? No, to be honest, it's not. Star Ocean is a very impressive RPG with tons of goodies. For example, there is a whole inventing simulator integrated in the game, or a versus battle minigame, where you can fight against friends in multiplayer-sessions. Not to speak about the afterplay bonus dungeons... The game offers so much to play, you can play the game for years. Really. 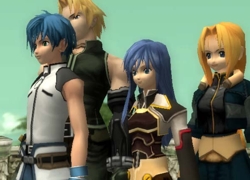 Aside of the gameplay, Graphics are neat as well. Sometimes, you'll notice the age of the hardware, but overall, the game has detailed characters, a wonderful environment and facial expressions. It seems sometimes Tri Ace wanted too much, and the framerate drops, but it's not too bad. The sound is pretty good as well. Voiceover is pretty professional, the cut-scenes are well done. Sometimes you'll see nice FMVs.

One word about the soundtrack. In a overall view, the music is absolutely well done and it helps the game to develop a very unique atmosphere. But sometimes, the music just doesn't fit the dungeons and is way too upbeat. That's a little flaw, but nothing too bad.

Yet, the game has its problems which result in a lower rating that the game deserves. For starters, Star Ocean 3 is pretty unfair sometimes. You'll die not only if your HP are down to zero, you'll die if your MP are out as well. On top of that, there's no spell that locks MP kills or such, and some monsters only affect your MP. Another point to critizise is that sometimes, it's illogical how the EXP are allocated. There are monsters you barely survive with disappointing low experience points. Then, there are other monsters who aren't really a threat to you, but they give you more than double the EXP than the monsters mentioned before. A little fine-tuning would have been a benefit for the game.

Star Ocean is stunning. It has a great story, a cool soundtrack, nice graphics and a very cool battle system. Aside of that, it is fun to play for so many hours, even after you completed the main story. The characters are sympathetic and very convincing. The game could have earned a almost perfect ranking, if it wasn't for the flaws. MP-death, strange EXP output and unfair situations result in a lower ranking. But it is a top-notch "classic"-game anyway.