Enix - Tested on the Sony PlayStation in 2005

Star Ocean games are special in terms of setting. Like Star Trek, the universe the game plays in is our universe, in the somewhat distant future. Star Ocean: The Second Story is the successor of the SNES game Star Ocean, which was the first game of the independent tri-Ace team. For their second game, tri-Ace put lots of faith and many innovations into the game, but they also tried to create a unique "tri-Ace-feeling" within this game.

The first thing that's surprising is that you can choose one of two characters to be your main hero. The story is quite similar for both heroes (since they're battling it out together), but especially in the first of two game CDs, you'll notice many differences - the character you've chosen gets more in-depth cutscenes so that you get to know whom you chose. The planet Expel, an underdeveloped planed with a culture similar to earths 18th century is plagued with an immense amount of very intelligent monsters after a strange object fell from the sky. Cloud Kenni, one of the two heroes is sent by the Earth Federation government along with his father to find out about this strange object. Due to a mysterious event, Cloud suddenly finds himself on the planet of Expel, where he rescues a girl which is threatened by a gigantic bear-like monster. This girl turns out to be Rena, our second heroine who ran away from her mother right into this mysterious forest where she feels a strange calm feeling. As the story advances, the two face a extraordinary tragic event and fight ten wicked creatures on the strange world of Energy Nede. 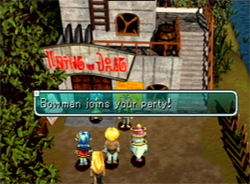 This game introduced tri-Ace's famous real-time battle system for the first time. You can run around the battlefield as you please and control your character directly. This is a mixture between Action-RPGs such as "Ys - the Ark of Naphiatism" and classic RPGs. What's very strange about the combat system is that in the default setting of the battle-mode, you can't control your fighters directly. This mode is frustrating and illogical, so better switch to direct control soon. The party you have at the end of the game consists only of two fixed characters, the rest depends on actions and decisions made throughout the game. You can have a maximum of eight out of twelve characters.

The graphics of the game are quite standard for a RPG of the late 90s: Pre-rendered backgrounds with spirtes for the characters. I don't know how they did it, but tri-Ace added a very nice interpolation effect to their spirtes so they won't look too rough. This effect seems very hardware intensive, so it's turned off in the battle scenes. Although I called the graphics "quite standard" before, they're are very ageless and still very pretty. The rendered backgrounds are not as good as the ones in other RPGs of that time. The sound, created by Motoi Sakuraba fits the game very well, but is a bit rough on the sound quality side.

TItem creation, typical for the Star Ocean series, is also a part of this game again. It's a lot simpler than it is in Star Ocean 3, but you still have to get into the system before you can create the best items. Another system that's very complex in Star Ocean 2 is the skill system. You can actually "buy" skills and level them up, not unlike Valkyrie Profile. Possibly the most unique feature of Star Ocean 2 is the freedom of how you can advance in your story. In fact, your party has only two fixed characters - Cloud and Rena. The other characters are all optional, as well are most of the important items and weapons. So even if you're playing carefully, you might end up with a weak party missing most of the important items.

This game gave me a headache.. Star Ocean 2 is a game that's fun to play, it has an epic storyline, nice graphics and a good soundtrack. So why do I give this game such a low ranking? This piece of software is just damn unfair. Well, the game is not really unfair in terms of gameplay itself, but you can really mess it up, even if you're a cautious player. If you've got bad luck, you're not able to beat the final boss although you're more than 20 level above the recomendations, for example. So it would be unfair to give the game a "classic" ranking if luck plays such a big role. "classic" means that all of the games' flaws are relatively minor. I know that there are many Star Ocean or tri-Ace fans out there who say that the game is pretty easy if you just play it thorough - that might be true, but then the game has the major flaw that the game has to be played completely different than the flow of the story suggests. If you play through the game without any problems, you can add nine lucky percent to the rating!