Sega - tested on the Mega Drive in 2015 and many, many times before

Ah yes, before I go on with the review, let me tell you a little story why Shining Force is so special to me. Back in early 1994, I already had made my first experience with turn based RPGs and wanted to try out a turn based strategy RPG for a change. Luckily, my friend Sascha had just finished Shining Force which he got for christmas 1993, and I borrowed the game so I could play it later on. And man, was this game a blast. I sat there for hours and hours, with my trusty English to German dictionary next to me so that I could understand what's written on the screen.

I loved every minute of the game, but eventually I had to return it (Since there was no ebay yet in 1994 that allowed me to accientally sell the game ^^), but I was so hooked that I completely swapped games with Sascha later that year, exchanging Shining Force for my Mega Man X cartridge. And ever since, I'm replaying Shining Force from time to time every couple of years.

Well, what's to say about the original Shining Force? Players control Max, a swordsman from the city of Guardiana, who was going to lead a group of warriors to do some reconnaissance missions. But a country located on another continent already started war preparations and attacked Guardiana while Max and his group were away on such a mission. The aggressive country was Runefaust, and its leaders planned to reawaken Dark Dragon, an evil being that was cast away a millennium ago. The story is pretty simple, but it has its moments (for instance some events with a Runefaust general called "Kane") and overall the characters are likeable and there's lots and lots of funny moments. The story is told in chapters.

The story is full of cliché and full of holes and stereotypical characters. What's really special about Shining Force is it's addition of typical RPG elements into the Strategy RPG genre. There are towns to traverse and outside of battles, there is an overworld where players can wander around. During these times, only Max is controlled. In battle, players move every character in a predefined grid and choose to do various actions - attack monsters, cast healing magic, use items and so on. Enemies can also do their moves, and depending on the "agility" stat, party members or monsters will do their turn. Whenever an encounter happens, the screen switches to display a very dramatic viewpoint of the skirmish. Especially spells are well executed, sprites are big and backgrounds gorgeous.

The whole visual department of Shining Force is strong, especially for a 1992 game. The title uses lots of plain colors and is void of much dithering. This way, the game looks not grainy and quite ageless. The music is full of great melodies, the sound very bass focused and with clear instruments. In contrast to many other Mega Drive / Genesis games, Shining Force does sound pleasing and does not have these screeching or metal sounding instruments.

Players can recruit over 30 characters to the Shining Force, which adds lots of replay value to try out many different party combinations. Up to 11 members can be added to the fighting squad, other than Max. There's no permadeath in this game, so it's easy to try out various heroes. Max can talk to every member of the Force in the headquarters, which are present in every city.

An interesting approach in this game are the stats - everyone can calculate them! During battles, players can move around on the map and see the stats of enemies and party members alike. To get a close estimation of what an attack will do in damage numbers, just subtrackt the defense of the attacked character or monster from the attacker's attack value. It's that simple and does not need any insane five digit HP numbers.

The game is part of many Mega Drive / Genesis game collections. 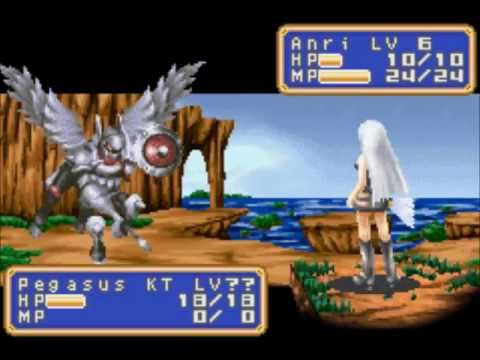 In 2004, Sega's subsidiary amusement vision released an updated version of the game on the Gameboy Advance. The story has been altered to be a bit modern (although it strays from the original game, especially concerning the background story of some characters), the graphics have been completely redrawn, several chapters have been added and a new card collection system has been added as well.

This game is a strong remake and has some of its own strenghts and weaknesses, but it's not being tested here since it is so different from the original that it basically deservers its own review.

Shining Force is strong in almost any regard. It plays great, sounds great, looks great and has lots of replay value. Just look around here at rpg-o-mania, how much Shining Force stuff you can find here. It's a truly great game that is over 25 years old and can still be played perfectly.