tri-ace - Tested on the Sony PlayStation in 2005

A hundred years ago, there was a war going on between the human race and the elves. The elves had support from all the other nonhumans, the dwarves and goblins. No one won the war, and now it's long gone, but distrust still parts humans and nonhumans. The hate is based upon a tragic event in the past, where the great elven king fell in love with a human girl, causing a fatal disease among the elves which was the end of the elven immortality. For the humans, this disease makes the infected go mad and violent. 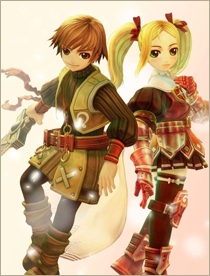 In this world, there were two friends, Gawain Rothchild and Cairn Russel who work for the human empire Radiata. They were the best of friends and were loved by all the humans. Cairn was known to be the one who had slain the big water dragon. Sixteen years ago though, Cairn was killed and it's said that it was Gawain, who has not been seen ever since. Cairn's son, Jack does not know much about this tragic past and lives his life as a teenager who trains with his sister Adele to become a Radiata Knight just as his father.

The story of Radiata Stories may seem to begin just like another RPG, but RS wouldn't be a tri-Ace RPG if it hadn't told the story in a unique way. For starters, Jack Russel is not the brightest character. He's not stupid, but naive, inexperienced, quite frank and honest. This is why Jack often gets himself into embarrassing scenes, which is very funny for the player. Although the game is like a comedy at first, it gets serious very soon and turns out to be quite some epic RPG, which offers you two different stories - at one point in the game, you can choose two completely different ways how to continue the game.

Gameplay-wise, Radiata Stories combines elements of Suikoden, Zelda, Valkyrie Profile and Star Ocean. The Suikoden-part of the game is that you can collect many characters, with the difference that all of your friends can join you in battle, even shop owners and so on. By the way, nearly all of Radiata's inhabitants have their own personality, so you cannot tell at first sight who can be added into party and who cannot. The world itself is lot like Zelda. There are day and night changes (so you can never tell where possible friends are) and there's no world map, you have to walk around the world in "real-time". The world is not as free and open as in Zelda, you mostly walk on narrow paths from a side view that resembles Valkyrie Profile.

Battles seem to use the same engine Star Ocean 3 did. The battle system itself it less complex than Star Ocean 3. The fury meter is gone, as did bonus battles. Now you can block pressing a single button, same goes for attacking. Items can be used multiple times without a forced break in-between and you can control only the main character. There are no magic points, all you have to take care about are your Hitpoints. Now you can give commands to your comrades (as a compensation for not being able to control them), get into formations (so called "links") or activate group-commands.

The whole game looks stunning. Among games like God of War, ICO and the like, Radiata Stories joins the ranks of the best looking PS2 games. Aside from the technical point of view (which is almost perfect, only some trees could look a little better), the scenery is wonderful. Characters are detailed and everyone has a full-modeled face showing emotions. Animations are smooth and cutscenes (No videos, by the way) are created with motion capture technology. The music, created by Noriyuki Iwadare who is famous for his excellent work in games such as Grandia or Lunar, is not the best point of Radiata Stories. It does suit the atmosphere and has some outstanding tunes, but the soundtrack is not excellent. Interesting though, that the Soundtrack is published under the label of tri-crescendo, the company of Motoi Sakuraba who did the scores of every other tri-Ace game so far.

Radiata Stories does not re-invent the Role Play Game genre. Every aspect of the game have already been seen in various games. But the parts are merged together in such a great way, that Radiata Stories is one of the best japanese RPGs on the PlayStation 2, with nearly no flaws. The reason why the rating is relatively low, even if the game is really great is because the game consists mostly of aspects invented by other RPGs, and the soundtrack is not as excellent as the game.