Squaresoft - tested on the SNES in 2015 and many, many times before

First things first, this game goes by a lot of names. In the US, it was called "Final Fantasy Mystic Quest", in PAL regions "Mystic Quest Legend", and in Japan "Final Fantasy USA: Mystic Quest". I decided that the title of this review will be the US version, I will refer to this game with its European title throughout the text.

And as confusing as the game is, as confusing is the whole story behind. This game is no Final Fantasy, and the quest certainly isn't mystic. Squaresoft wanted to create a beginner's RPG for westeners, even though Final Fantasy I and IV already have been released at that point. In Europe, there was no such thing as a console RPG on a Nintendo console beforehand, so Nintendo decided to release the game as its first RPG along with lots of media and press coverage

First, about the game 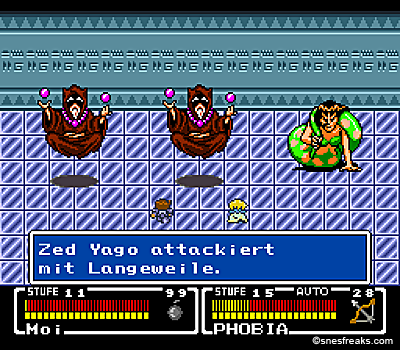 The game is indeed a very simple version of a turn based RPG. The story is simple: The player characters' village has been destroyed, and the player character ("Benjamin") is told to be the legendary hero who has to free four countries that span around an old tower. Here lies a Final Fantasy reference, as the hero has to grasp the power of four crystals in order to defeat the evil demon king who resides in the tower. The story is shallow, as are the characters. There is only one party member that joins or leaves automatically.

The German version I played was even worse in terms of story, as some aspects were cut to make room for cheap jokes. The old sage doesn't say anything useful within the game, but comes up with jokes like "do you have 20 cent for a phone call?". It's hilarious.

Battles are turn based and simple, there's not much besides attacking, using magic (healing or offensive), defending and status ailments. There are no random encounters. In fact, there is only a defined number of battles in the whole game as there are absolutely no repeated battles. There are enemies on the screen that are gone once they're defeated, and there are battlegrounds on the overworld with a set number of encounters. An interesting element is that enemies change their sprites when they're getting weak. 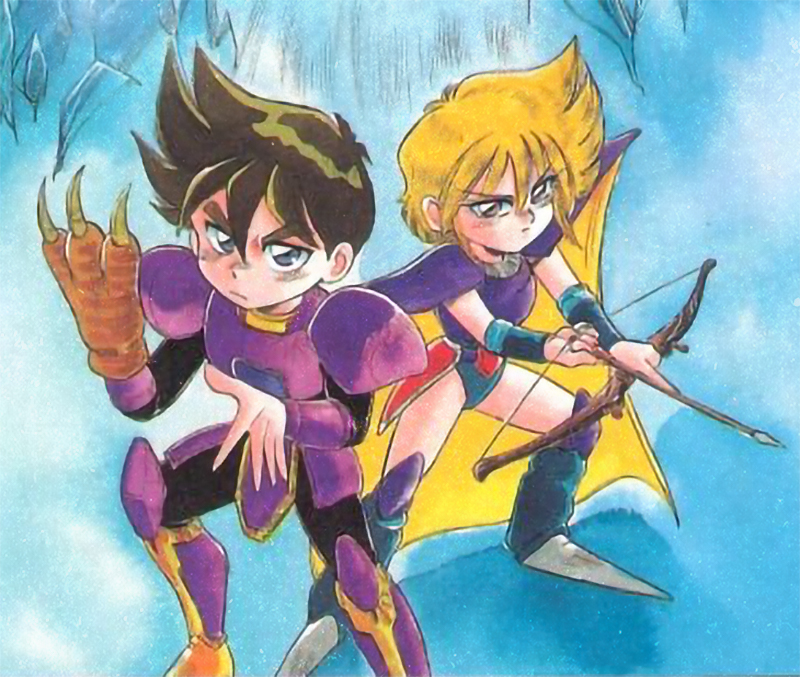 Dungeons have some variety to them, as they do have some "Zelda" inspirations with certain items that can be used in dungeons. The main focus is on classic dungeon exploring with a boss at the end. There are towns, but no shops or money, the new items are just obtained or found.

The visuals are very reminiscent of Final Fantasy II, but a bit more blocky than in the aforementioned game. The sountrack on the other hand has some very complex tunes and has been composed by Ryuji Sasai, a long term musician at Squaresoft / Square Enix who would later on compose the great soundtrack of Rudra no Hihō.

What's special about this game? 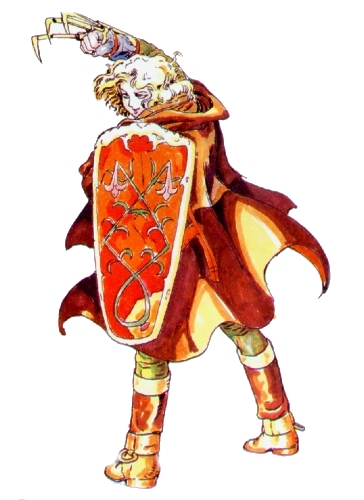 You see, ususally, in the area above the opinion box, we're trying to be as neutral as possible about the game and just describe what's in the respective game. But I can already tell you that the rating will be one of the lower ones here at rpg-o-mania, but yet the game receives lots of love in the net or within the JRPG community.

The main reason is that the game succeeded in what it wanted to be: The first real RPG for gamers. And for me, it was just that. I never played turn based RPGs before, I didn't know what experience points were, how hit points worked, how to control a party of multiple enemies, and it was indeed Mystic Quest Legend that taught me all of this. I wouldn't have shown any interest in games like Shining Force (which I just played two months after Mystic Quest Legend, and ultimately Shining Force made be really feel attached to a game for the first time), I wouldn't have understood Breath of Fire, Suikoden or all that came afterwards and made this website.

Commercially, the game wasn't a huge seller, and it's no wonder why as the game itself does not offer anything much for veteran RPG players. I mostly liked it because I just happened to be a 12 year old who made his first foray into the world of fantasy RPGs.

As laughably as the German translation was, Nintendo of Europe included a handy guidebook with the game that explained much of the stategies required for such a game. And the guide also included a full walkthrough, where some of the characters' stories were fleshed out more with almost novel style writing. It really helped the atmosphere. These guidebooks eventually were what was ultimately the inspiration of rpg-o-mania. So if you like this site, then it's all thanks to this stupidly bad game.

If you're able to understand German, there's a good report by our friend Binary Scroll available here.

The little bad game I just happen to like. Mystic Quest Legend does offer almost nothing to players. No good story, no interesting combat, no nice visuals. It has a good soundtrack, but nothing else. If you don't have nostalgia for the game, it's just not worth playing. But boy do I play it from time to time. My precious first RPG.