Game Arts - Tested on the Sony PlayStation in 2004

The game starts thousand years after Alex beat the Magic Emperor and rescued what was most precious to him. Most of the places known in Lunar: Silver Star are gone, only some places are still existant. The climate of Lunar seems to have changed as well. Caldor Island is completely frozen over and now there's a big desert in the middle of the world. A boy named Hiro (what a name!) was born into this world that was once created by one single human, Althena.

But why was the world created by Althena? Lunar is originally just a moon, orbiting the giant planet known as "The Blue Star". The Blue Star, once inhabited by humans turned into a vast land, cleft by deadly snowstorms. Legends on Lunar say, that a war destroyed the Blue Star, forcing Althena to move the remaining people to Lunar. There is one girl supposed to watch over thee Blue Star now, and her awakening is the start of Eternal Blue. 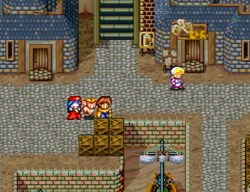 This girl, Lucia, eventually ascends to Lunar, and meets Hiro just as she sets her foot down in the top floor of the old tower "Blue Spire". She asks Hiro to guide him to the Goddess Althena. The boy, fallen in love by the beautiful looks of Lucia and longing for an adventure willingly accepts to guide her.

Game Arts managed to expand the world of its predecessor without being forced to take care of every detail presented there. The idea of a successor taking place thousand years after the original game reminds a lot of Phantasy Star, though. Nevertheless, the story is very intense and warm-hearted, things you don't see in some more famous RPGs.

The gameplay is quite the same as in Lunar: Silver Star Story. The battlegrounds are not just there for fun, the characters move around during battle. This means that the range of a character, his move and number of attacks do affect the combat a lot. This is what Lunar fans like most about the combat system: Every battle is a challenge, you have to think of tactics how to get rid of the monsters as soon as possible. Winning by just triggering the "attack" menu is almost impossible, or at least you're going to lose lots of HP. On top of that, the monsters in Lunar are always quite strong, so it's highly recommended that you fight every battle you can fight. If you clean all the areas of all monsters there, you won't have a problem beating the game though.

Although the game is not one of the easiest RPGs, it's pretty fair. Even characters that died during battle get EXP. So you won't have to reset after a boss killed one of your fighters right before he died. Everyone gets EXP. Lunar does not only have team spirit in the story, but in the gameplay as well.

The visuals are in classical 2D style (as you can see in the screenshot above), which looks pretty good to those who like this kind of graphics. For people who are not to keen on 2D graphics, Lunar: Eternal Blue might look a bit old-fashioned. The sound, however is almost second to none. Mr. Noriyuki Iwadare truly did some great job here. The voiceovers aren't to bad either, but alas, some voices are pretty mediocre.

I cannot think of RPG fans that do not like Lunar: Eternal Blue Complete. It's got a warm-hearted, yet mature story, a cool cast of characters, impressive anime-styled cutscenes and a challening combat system which is pretty fair on top of that. The only flaw this game has are probably the graphics for those who think 2D is outdated.