Sacnoth - Tested on the PlayStation in 2022 by Kaoru

Koudelka is an interesting little game. It was made by Sacnoth, a company formed by people who left Square, while the publisher and co-financer was SNK, mostly known for their fighting games. For a new IP by a new company Koudelka is surprisingly ambitious and certainly does not play it save. While mostly overlooked back when it released, it now has garnered more of a cult following, in parts thanks to the short success story of Shadow Hearts, which is set in the same world as Koudelka.

The game takes place in the rare JRPG setting of… the real world. Trust me on this, back then not every second JRPG tried to be Persona, so real world settings were indeed rare. Even more so, the game takes place in Wales, in 1899, and exclusively in a single monastery complex. If that sounds a bit like the setting for a horror game to you, then you would be right: Koudelka is a genre mix between JRPG and horror game elements.

Koudelka does not simply remain the name of the game by the way; our main heroine is named the same. She breaks into the old monastery thanks to a message by a ghost. In here, she meets the young man Edward, which she saves from a werewolf. Later the two stumble upon a priest while facing the first boss of the game. All three characters have different motivations for why they search the monastery, usually unknown to the others and the player for quite some time. Evil is afoot in the building, at least that much seems to be sure, and none of the three is scared away by the monsters and ghosts that attack. There is power in numbers, as they say, so even if the group doesn't always see eye to eye on things, especially when it comes to the zealot priest, they keep journeying together into the building's mystery. 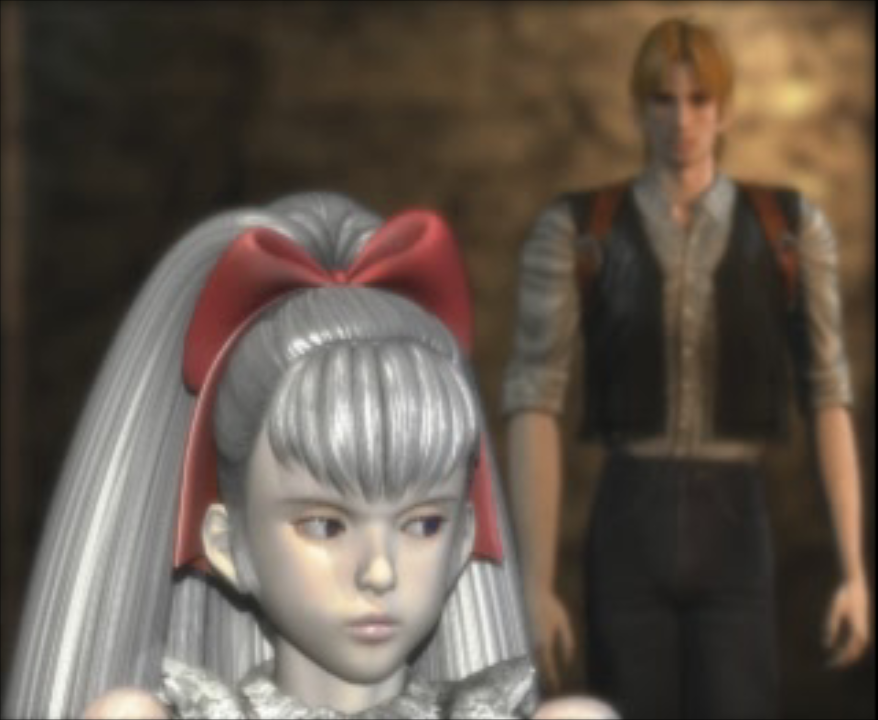 We follow an interesting and colourful team throughout the storyline. None of the three is overly charming, they do bicker with each other, but that makes them feel more believable as human beings. It does help that the developers went through the trouble to motion capture the cutscenes, giving the characters a lot more subtle interactions with each other than you'd normally get on the PS1. Add to that some good voice acting, another rarity on the system, which is used any time any characters speaks and not just in the (plenty) FMV cutscenes. Sadly, they do not display subtitles alongside the spoken dialogue. There was certainly some money put into the production but also the localisation of this game, much more than I expected, both from the era, from a new small studio, or from what was usually seen in an SNK game.

The gameplay on the other hand can only be described as “messy”. It seems like there were many ideas coming in through the planning process of the game, and they decided to use all of them. There is a lot going on, not everything working well together, a lot more than a game of Koudelka's length needed. Which is by the way about 10 hours, despite the four discs. As said earlier, those are mostly filled up by FMVs and voice acting. The game is structured like a Survival Horror game, but has the systems of a long RPG, the two genres seemingly always at odds with each other.

When a battle starts, well, firstly you get to hear one of the few tracks in the game, as the monastery is mostly ambient sound and only special scenes and battles have music playing. It's a really good track too, I had the normal and boss battle music stuck in my head for quite some time. Nevertheless, once the 3D battlefield has finally fully rendered and is ready for the slow battle to commence, you will find your characters on a small checkerboard. The three and the monsters don't just duke it out normally, there is actually movement and positioning involved. For a physical attack one has to obviously stand right next to the target. For weak magic users it would thus be beneficially to stand back, as magic has no range limit and only the character spearheading the formation can be physically attacked. But no, magic actually does have range of some sorts, as the damage calculation depends on how close to the target it is cast. A target that can move away since it takes a while to cast a spell. Meanwhile the physical fighter has to worry about the fact that their weapon could break at any time, while hopefully having a replacement ready to go in the strictly limited inventory.

Should the team succeed in killing the enemies they are rewarded Experience Points. Leveling up though does not lead to a flat stat increase; instead, the player can allocate the points as they want between the six primary statistics of the character. Meanwhile magic and weapon proficiency only rises by repeated use. It is very Final Fantasy II in a sense and just like that game Koudelka doesn't reward jacks of all traits, instead you are better of the specialize in magic users and brawlers. However, maybe not too much, in case the game, I don't know, might split the group up and you only play as Koudelka for a while. Would be a shame if she didn't have the stats to survive a hit because you thought she can always stand behind Edward and be out of reach of the enemy. 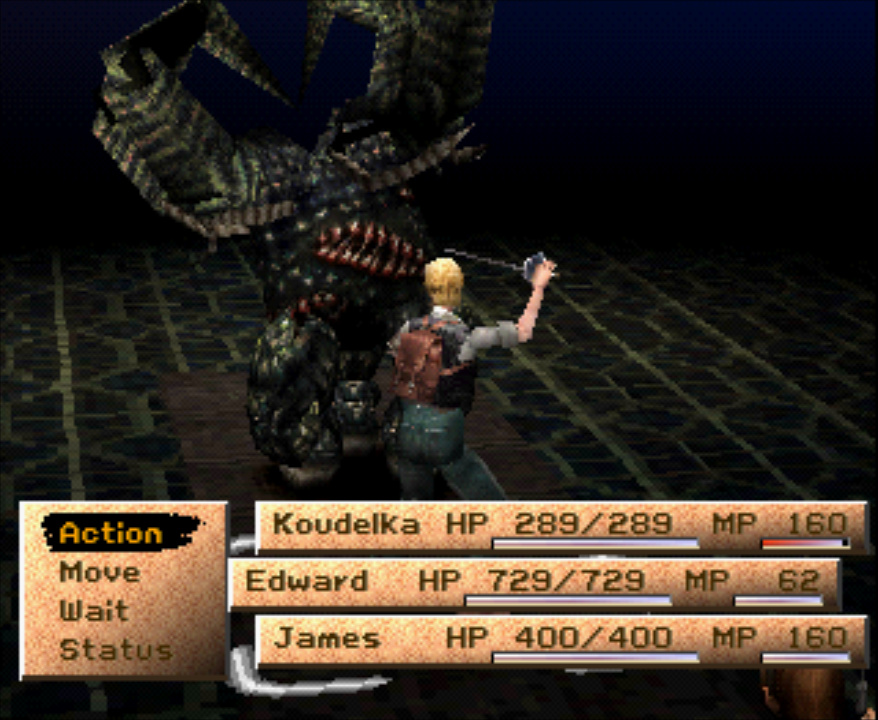 To be honest, the game isn't actually that hard. The first few battles are tough and there is a real nasty boss at the end of the third disc. Otherwise, with specialised levelling, everyone becomes a powerhouse quickly after the first disc. Luckily, as items aren't always reliable due to at least equipment and weapons being random drops with random elemental affinities at the end of battles. You might not even get armour for a long stretch of the game, should you be unlucky. It's really quite weird to see systems in place that want to put in some of the danger and stress of the Survival Horror side of the genre mix that usually get cancelled out by the RPG mechanics because the developers doubted the player making it through otherwise. Same with the horror game puzzles that surprisingly often spell their solutions out to you right away or get auto-completed once you find the necessary hint. 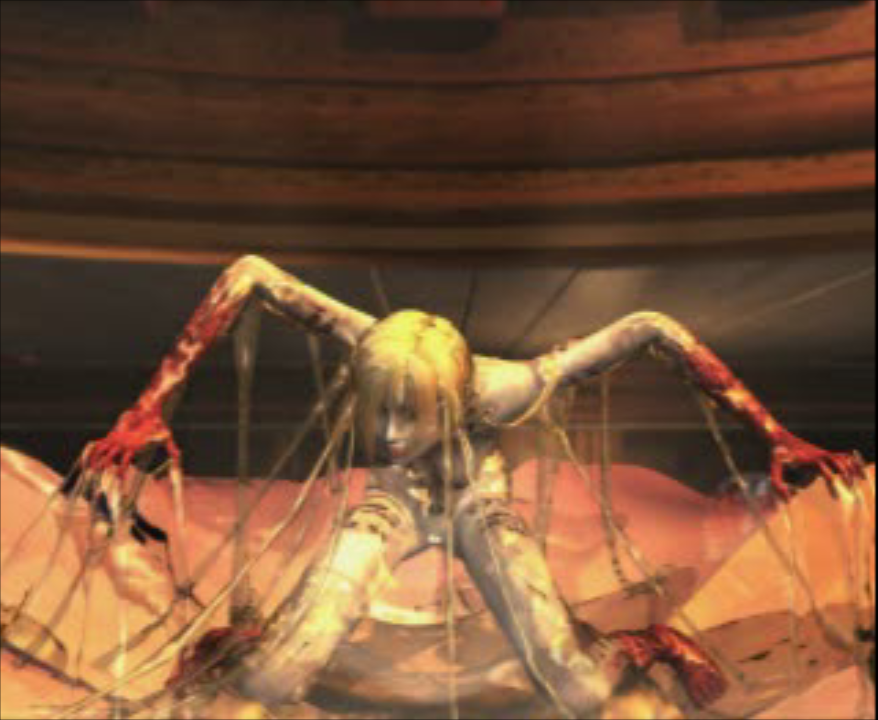 For all its quirks, the mess is just not that fun to play. Which I suppose not every game needs to be. In Koudelka it is by accident and not by design. Thankfully, the short time to finish the game saves it somewhat, once one is accustomed to the game after a disc. Yet the experience as a whole can be worth it. Koudelka is a fascinating game. In all it does wrong, but tries so hard and sincerely. And in all it does right by letting you explore a really cool setting full of creepily designed monsters. With a very well done presentation that almost makes it feel like you are watching a theatre play pan out.

There's also a screenshots gallery available, but please be aware of spoilers!

Personal story time: I own Koudelka since it released on the PS1. I tried playing it several times since. The slow and clunky battles always turned me off immediately. Now in 2022 I finally soldiered through. Did get used to the messy gameplay after a disc. Was fascinated by how cool the rest of the game is. I finally beat Koudelka and am very happy I got to experience the game. Yet I'm not sure I can recommend playing it yourself. If you are into quirky and experimental games, for sure though, then try it.