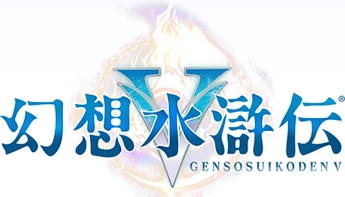 Suikoden III and IV weren't too highly renown among either Suikoden fans or common gamers. Although Suikoden III has a pretty good reputation, many fans were shocked by the innovations whereas Suikoden IV had too much flaws for most of the "common" gamers whereas many fans think of it as a good game. However they see the predecessors, many people where sceptical wheter Suikoden V was able to touch the masses the way part I and II of the series did.

As you may know from reviews around the web or print magazines, Suikoden V did pretty well in reaching this goal. For many Suikoden fans, it's the second best game in the series. But hey - isn't a review supposed to sum up the conclusion at the end of the text instead of spoiling everything right at the beginning? Yes, you're correct, but... before telling you what's good about this game, there's one thing that bugs me like nothing else in the game. And since I don't want to start off with negative aspects in a review of a good game, I thought it's best to tell you that it actually is a good game before complaining. 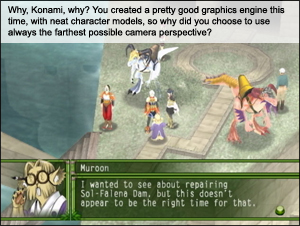 Okay, so what it is that bugs me that much? Suikoden III and IV weren't really famous for their fancy graphics, on the contrary, they're both known for looking a bit old fashioned. So, good news first, Suikoden V has a pretty good graphics engine. Okay, the textures aren't top-notch, but character models, facial expressions and costumes are pretty good designed. But then.. this. Konami implemented a fixed camera with only three zoom levels. Okay, for the gameplay, that does not matter, but what the hell did they think while creating the non-cinematic story sequences? They decided to let them always play in the farthest zoom level possible. So all that's left of the sequences where people wave their hands, yell at others or are sad because of... things is a bunch of small characters where you even can't tell what their faces look like. I don't know why, Konami? Were you afraid people might get too excited about the game, what's this forced drawback about? I mean, camera positions aren't really that hard to implement, especially since the graphics engine is able to cover many characters on screen including lots of environment. A realy questionable decision. 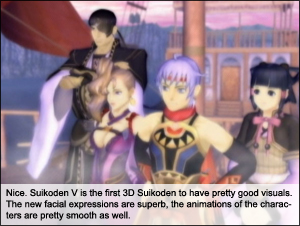 Unquestionable, on the other hand, is the story. It's about the Prince of the queendom of Falena who is forced to lead a fraction in a civil war despite the fact that he's basically just a representing puppy since all the political power in Falena stays in the hand of the royal women. I don't want to spoil too much, the story is pretty intelligent and sets traps here and there (especially in the beginning) to lead you into the wrong direction. This is all pretty good and about the masterpiece of the game which even rivals Suikoden 2. You can find out more about Suikoden V's story details at the Suikoden overview here on RPG-O-Mania. 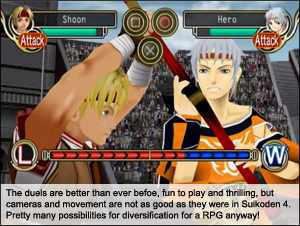 The gameplay is pretty much Suikoden standard. Fans are delighted since the six-person parties have returned. Aside of the standard Suikoden battle options, Suikoden V features some new aspects. You can take up to 10 people with you, where only six can join the round-based battles. You can switch people however, just like in Final Fantasy X. Another addition is that you can change battle formations which affects various stats such as "defense for all characters" or "magic power" and such. Those formations always also have a "formation skill", they've either got positive effects for the party or you can attack with all your party members at once, inflicting serious damage to the enemies. Aside of the round-based battles, there are the well-known "rock-paper-scissor" duels and army battles. Army battles are in real-time this time, pretty easy though. But all those various battle modes in addition with the gameplay features of collecting up to 108 characters and loads of miniplay (My favorite is the 3D dragon race) loosens up the strict roleplaying gameplay. 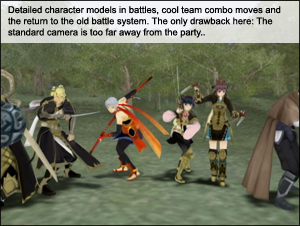 The audiovisual experience is a mixed one. As I wrote above, the graphics are pretty good, but the camera really kills some of the fun. The cinematic sequences with their fine voice overs and smooth animation make up for that a little. The soundtrack is Suikodish and pretty good, although not as good as the soundtrack of Suikoden I and II. There are lots of great tunes in it though. Something very positive to mention is that you can listen to the soundtrack in the game, which is typical for Suikoden. Although this does not seem too special at first, it means that you can listen to tons of good tracks for free without being forced to buy the soundtrack. A little drawback is that the neat full-screen artworks of the characters within the status screen are gone.

Suikoden 5 had the chance to score so much better than it did in the end. But the camera is really some faux pas, it just kills atmosphere. Aside of that, you get a very good classic RPG with many things to play, a stunning story and a good soundtrack.