150 years before the first Suikoden takes part, south of the Scarlet Moon Empire there is a ocean with various island city-states and dukedoms. North of this ocean and south of the land later known as Toran Republic, there is the Kooluk Empire, a nation that likes wars and always tries to expand their range of power. A few years before Suikoden IV takes part, Kooluk was at war with Scarlet Moon and slaughtered many villages at the Kooluk-Scarlet Moon-border. After they failed, now they're trying to take over the island nations in the south... right where our Hero just was promoted to be a knight of Gaien, the biggest country of the island nations.

The gameplay of Suikoden 4 is very classical, just as in Suikoden 1 and 2. Strangely enough, they completely ignored everything that changed in Suikoden III. No pair teams anymore, no triangle-story, no speaking heros... It's just like the old Suikodens, if this is bad or good depends on you. There are normal, round-based battles, strategical ship battles and the classical Suikoden one-on-one Duels. 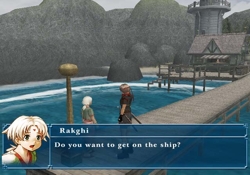 Suikoden IV doesn't have big flaws - collecting the 108 characters is still fun, the story is deep and very professional, the graphics are detailed and the sound comes up with some really great melodies. Yet, the game lacks also positive extremes. Graphics may be detailed and very smooth, but they lack some heart, just as the story. The game actually is lots of fun to play, it's somewhat in-between Suikoden 1 and 2.

Graphics are decent, as mentioned before. The places have been made to look realistic, which means there aren't too intense colors in the game. Also, the camera is free, which results in a lower detail level than other games. But nonetheless, there are 108 nicely modeled heros and such, so you cannot say the graphics are bad.

Suikoden 4 is a good game. It has a funny gameplay, 108 characters to collect, decent graphics, a great soundtrack and nice cutscenes with professional voice overs. Yet, what the game lacks is the heart that was put into Suikoden 1 and 2. The game is also a bit too short and too easy. If you can look over this, then you've got a nice RPG with about 35 hours of gameplay.