Suikoden III was heavily anticipated before its release in 2003. Along with the anticipation, however, among fans arose an incredible amount of what's to be expected from the game. This is no wonder since Suikoden II is one of the best games of the genre and one of the ultimate all-time classics. How can a game come up with such a predecessor? Will it make everything a little better like Suikoden II or, for example, Lunar: Eternal Blue did or was it doomed to fail from the beginning? 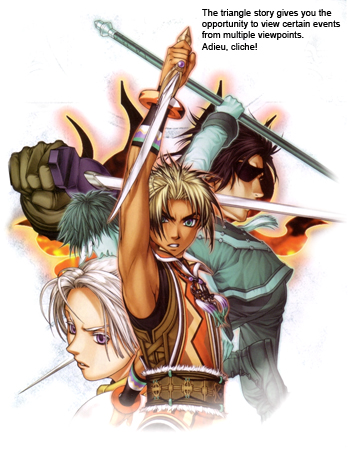 Facing this situation, Konami decided to take a risky step. First of all, this Suikoden is the first one with three-dimensional visuals. But the cut Konami did was heavier than just shifting dimensions. The team was an almost completely new one, and they did the right job, apparently - do things differently than the predecessor and open up completely new paths in terms of gameplay and story.

The first innovation was the way the story is being told. In the first half of the game, you can always switch the viewpoint of your story bei either watching the stories of Hugo, Chris or Geddoe. The game's setting is 15 years after Suikoden II and plays in the grasslands country, north of the Jowston Alliance / Tinto Republic from part 2, west of the Holy Kingdom of Harmonia and east of the Zexen Federation, once a part of the Grasslands. There has always been a struggle of war between Zexen, Grasslands and Harmonia. Fifty years ago, Harmonia tried to invade Grassland but was beaten by the Fire Bringer brigade, led by a person who stole the True Fire Rune from a Harmonian temple. Harmonia signed a treaty to not attack grasslands for at least fifty years - right now, however, the Zexen Federation is a bigger problem for the Grasslands, or so it seems. While talking about a peace treaty, the Lizard Clan, one of Grassland's clans suddenly attacks the Zexen Knights, which, as a countermeasure burn down a Karayan (another one of the six clans) village. The story can be viewed from the viewpoint of Chris, a Zexen knight, Hugo, son of the Karayan village clan chief or Geddoe, mercenary hired by Holy Harmonia. As you watch their stories entwine you always see specific parts of the story from various perspectives. This is the best way to avoid a "good and evil" cliche. This feature also made Suikoden III loved among people who were previously no Suikoden fans. However, although the feature is worked out, the enemies are impressively personalized and the characters show some personality, old-fashioned Suikoden-fans just didn't want to like them - "Apple and Cesar can never come up with the likes of Mathiu or Shu", fans say. 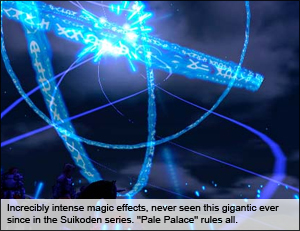 So Suikoden III came out with some heavy inventions. First of all, the three dimensional visuals. Since it was the first time for a Suikoden to be in 3D, and on top of that created by a new team, Konami used the popular "Renderware" engine (the famous "Grand Theft Auto 3" used this graphics engine as well). "Renderware" is a very powerful engine, but the version back then supposedly had problems with frame drops. Either that, or the Suikoden III-team didn't know how to stabilize the graphics, the game suffers a lot from heavy frame drops. The design, however was pretty professional: The characters are detailed (although low on polygons) with facial expressions based on textures and the backgrounds pretty nice, lively and detailed as well. For a first-timer, they're not really to criticise from the graphical point of view, although the PS2 is capable of much more. Praise for the facial designs of the 3D models, they are able to create lots of emotions.

But like written above, the heaviest innovations were gameplay-wise. The standard turn-based battle system was exchanged by a round-based "pair" battle-system where you team up your six party members in groups of two. This has two main impacts on battle itself: If you're using runes (magic), you can use only one of two characters per turn, the other character attacks randomly. The other one is that you can heal two characters with just one water rune (heal magic), which comes in pretty handy at times. There's also the possibility to share healing items to heal both characters at once. A drawback is that you cannot use items on another pair. The battle system now also uses the battlefield for strategical combat, shifting the gameplay a bit in the direction of games like "Lunar" of "Grandia". Your characters actually move on the field, they've got a specific range where they can still reach foes and on top of that, some magic is range-based which means that you are either stuck by magic circles if it's attack magic or healed only within a specific range. A little mean is the fact that some range magic does not only attack your enemies but your party members as well. But, often enough party-ignited attack magic is dodged by your fellow comrades. Last but not least, the time your characters act was not determined by some character-status anymore but by skills and equipment. For example, if you wanted to have a faster chanting time of your healing water rune, you had to visit an education center where you could level up your water magic skill. The points needed to level up skills were given after every victorious battle (funny enough, even after the last battle - hello, the game has no new game+ option, this is pretty useless, Konami!). 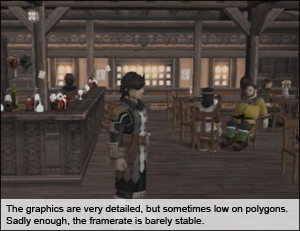 Well, this is a good transition to the next innovation included in Suikoden III - the pretty good skill system. Your characters have various skills which can be leveled up using the previously mentioned skill points. The ranking goes from E over D, C, B, B+, A, A+ to S. However, you cannot gain a S-ranking with every character at every skill. Your people are talented more or less in various aspects, so for example the fighting gal Emily can reach a S-skill in the pretty important "swing"-skill (which determines the amount of hits you have in battle), whereas our magic user Viki can only reach B. However, Emily is pretty much useless in magic use where Viki can even power up the devastating "Pale Gate"-magic. This gives you the possibilty to level up your characters at various aspects without ignoring their talents.

The sound, composed by Michiru Yamane, Takashi Yoshida and Masahiko Kimura comes up with lots of pretty memorable melodies. However, not all of them are quite fitting, especially one boss battle is more like funny polka than actually creating the atmosphere of fighting a hard enemy. But overall, they did a good job. It's hard creating a soundtrack that succeeds a "Konami Khukeia Club" soundtrack though.

The biggest problem of Suikoden III is its own predecessor. If there wouldn't have been any Suikoden II, probably this game would enjoy a much better reputation among the fans. But even if Suikoden II did everything almost perfect and Suikoden III was sometimes a two-sided coin, it still is one of the best games of the series - just give the game a fair chance, don't compare it with its predecessor