Grandia was developed in 1997 to create some kind of counterpart for the Saturn to the upcoming Final Fantasy VII on Sony's PS1. We all know how it ended, and so was the fate of Grandia that there was no western Saturn release, and finally two years later the game was a top seller on the PS1. The same fate should meet Grandia II, originally developed for Segas Dreamcast and later on (quite miserably) ported to PS2 and PC.

Although the series is quite different to Final Fantasy in terms of storytelling and gameplay, one thing is similar: The games of the series have nothing to do with each other, storywise. So the world of Grandia II is completely different to the world of Grandia 1. Fans of the first Grandia are going to notice that from the first minute of the game - whereas Grandia started off with likeable characters and some innocent charme, Grandia II's hero is a zynical ranger (a so-called geohound), who unwillingly serves as a bodyguard for a songstress of the local church who is going to a ceremony in a nearby tower. The ceremony fails, and as a result, the songstress Elena remains schizophrenic and turns into the moody beauty Milennia every now and then, who claims to be a part of the God of Destruction who is said to be defeated for centuries. However, things are not as clear as you might suppose - the story twists, turns and reveals many aspects of the party you would have never guessed. I played many RPGs, but even five years after the release of Grandia II, I was surprised all the time how the story plays with and avoides clichés.

The story is supported by an intelligent combat system, which many consider to be the best of the genre. It is a mixture of classical round-based combat and Final Fantasy's Active Time Battle. You can take whatever time you need since the game stops whenever a menu pops up. On top of that, the game hides nothing - you can see the enemies hit points, actions, how long they need to launch an attack and so on. Skills and magic can be improved by using up special coins you get after each fight. This allows them to be more powerful and faster launched. If you reached a certain skill level, you can cancel all the enemies actions if you act smart. Magic can be used after equipping so-called "Mana eggs", this allows you to switch all your powered up magic from character to character if necessary. 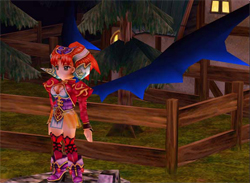 Soundwise, Grandia II offers one of the most anticipated soundtracks of the RPG business, created by Noriyuki Iwadare. The soundtrack varies from touchy to upbeat, rivaling the skills of great musicians such as Nobuo Uematsu. The game also offers voice-acting, with the best VG voice actors that were available back in 2000. (Almost all of them also dubbed characters in the Metal Gear Solid series.) Graphics-wise, the game is pretty good, but not as impressive as all of the other aspects of the game. I wonder why Game Arts decided to leave ou the mouth in the characters' faces. This is only a minor flaw, though.

The game has almost no negative points - graphics are not as great as the rest of the game, the CG-movies have too much different style (ingame based, rendered, anime style), the game is a tad too easy and - if you consider this as a negative point - when it's over, it's over. There are no after-ending dungeons or goodies to unlock.

Grandia II was once one of the best RPGs out there, but it aged badly. Even it was released on a platform that already offers quite ageless graphics and sound, still you have to deal undetailed characters. Landscapes are mostly quite dull - aside of the technical drawback, the game is the among the best of the genre: Soundtrack, story, gameplay do rarely meet a worthy competitor.