Final Fantasy X represents a turning point in the long-lasting RPG series. The cinematic ambitions of its direct predecessors reached a new high thanks to switching the platform from the first to the second PlayStation.

This review has been written by our friend Binary Scroll, and I asked him if I could translate his originally German text to English and convert it to rpg-o-mania's review standards.

I personally (meaning DocOwer) never found a way to get too attached to Final Fantasy X and I never made it past the first few hours. So I'm glad this very good and personal review exists. So without further ado, let's get on with the article about the last main line Final Fantasy game where the original games' producer, Hironobu Sakaguchi was executive producer!

The game system takes up elements of the first Final Fantasy part, such as anti-elemental protective spells and turn-based battles. Even time travelling is part of the plot again, while the narrative focus, as in the direct predecessors, is on the characters and their fates. 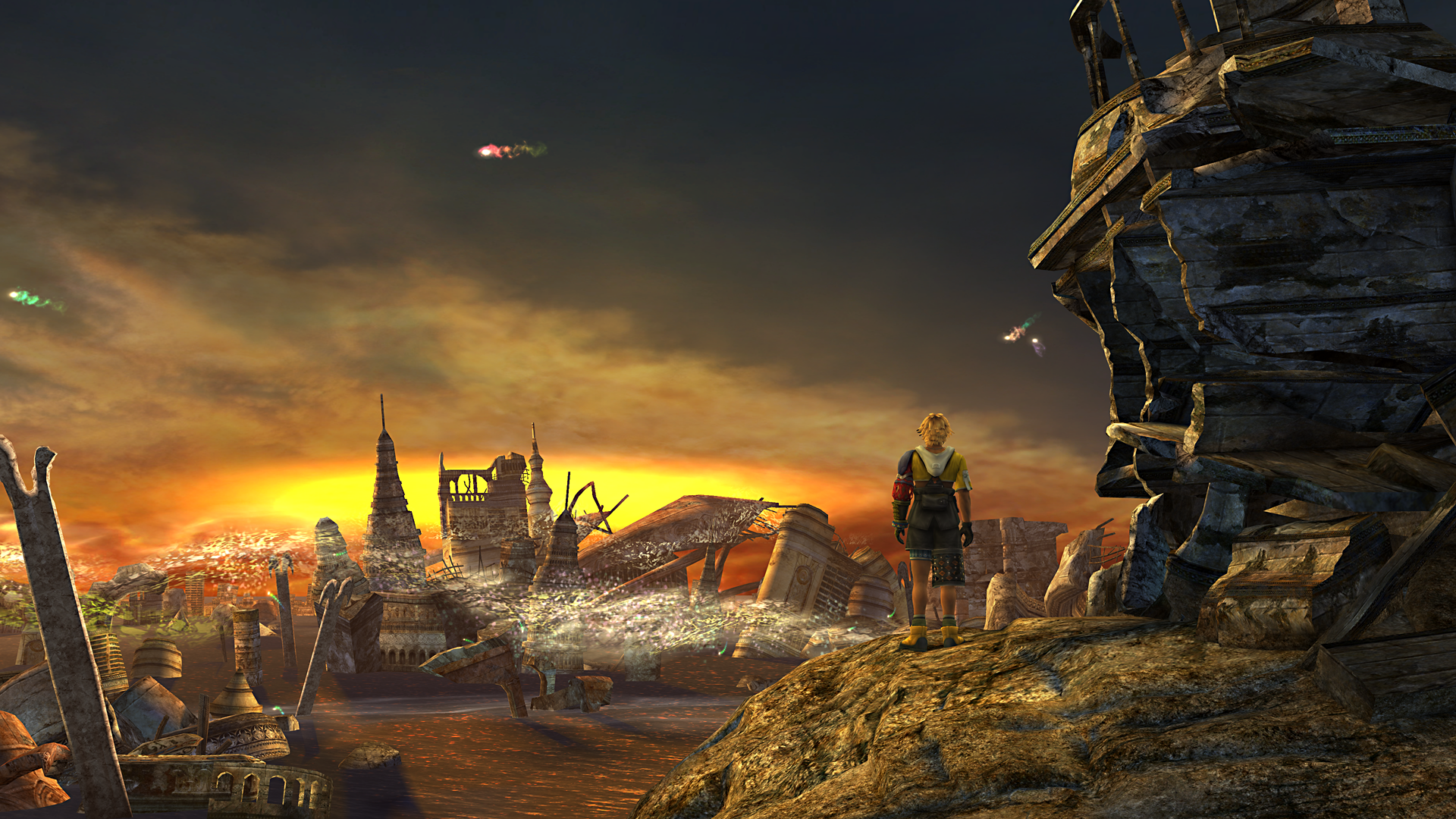 A kind of modernized best of back in 2001, which stood as the end point of a largely linear evolution, but the same era of gaming also was the starting point for new developments such as MMORPGs and direct story continuations.

Final Fantasy X represents the transition between "old" and "new" Final Fantasies - in the eyes of a significant number of fans, however, also between "good" and "bad" Final Fantasy games. For me personally, too, the publication of the tenth Final Fantasy part fell into a transition phase. In my late teenage years, my enthusiasm for Japanese role-playing games declined noticeably. Instead of getting Final Fantasy X on the first day, like Part VIII and IX, I took my time until a used PlayStation 2 was in the house, but it was mainly bought for Silent Hill sequels.

Nevertheless, I had been looking forward to the latest Final Fantasy, finally played it through, and deemed it good. However, I haven't even scratched the notorious side and post content, which could easily bring the season into the three-digit range. And since then, I haven't really felt the need to go through again. It wasn't until the game got into the GamePass for its 20th anniversary that I tackled the HD remaster.

In Final Fantasy X you take on the role of sporty Tidus, who lives in the futuristic city of Zanarkand. His life is completely turned upside down when his homeland is attacked and Tidus is catapulted 1000 years into the future by a fateful encounter. Meanwhile, the world called Spira has changed drastically: Technology is frowned upon for religious reasons, but that is not the only reason for the backwardness in Spira: a giant monster called Sin regularly attacks people and causes death and destruction.

The only hope for civilization are the so-called media, which can attain the final aeon through a pilgrimage through which Sin can be incapacitated for at least ten years. Tidus joins the medium Yuna and her bodyguard on such a journey and gets to know the world of Spira, which is characterized by spirituality and suffering. 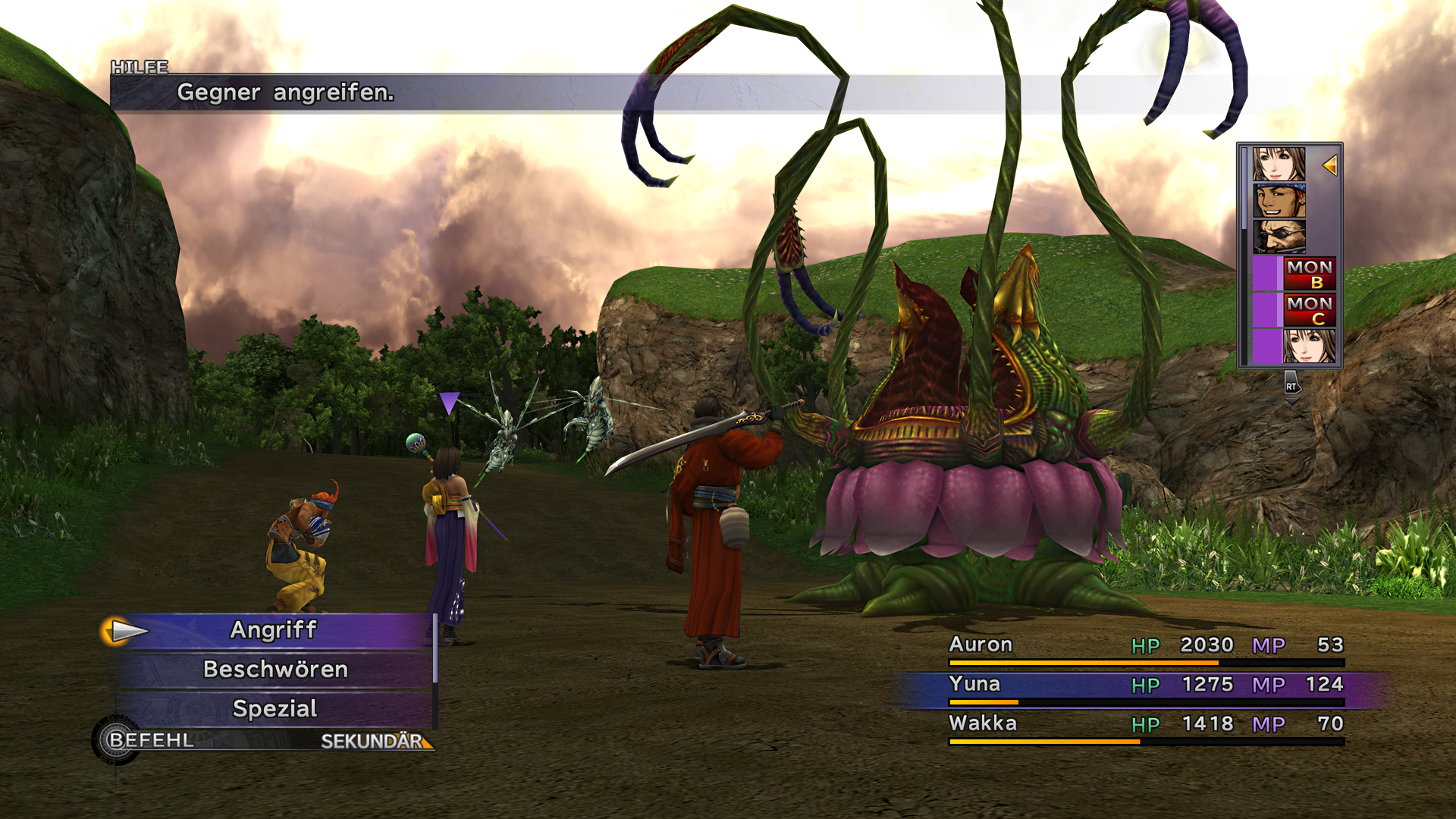 The game looks fantastic in the remaster, for which some graphics have been improved or even recreated. Of course, the source material was already well suited for modernization, as the backgrounds, unlike its predecessors, are mostly rendered in real time.

Accordingly, the remaster still looks good for today's standards, especially in comparison to the new editions of Part VII, VIII and IX, which sometimes seem like a frankenstein-like piece.

The DVD as a new storage medium offered enough space for dialogue sequences that were fully set to music for the first time. A possibility that has been used so extensively by the development team that there is no real flow of the game, especially in the first few hours. Instead, it feels more like an interactive movie. Fortunately, that goes away after a while, and then the game is also in a good mood.

This is mainly due to the fun combat system that is strictly turn-based. It is always clear who is taking the train and when, which makes planning much easier. Characters can be substituted into the actively fighting group at any time to react to the current situation. For example, enemies that are flying and difficult to reach should be dealt with by Wakka's Blitzball, while elemental weaknesses can be exploited by the black magician Lulu.

I was a bit surprised by the high random combat rate for PlayStation 2, which can be really annoying in some areas. To compensate for this, there are only simple puzzles to solve in the temple shrines and, if at all, only boss fights to be fought. In addition to fortifying monsters, I was particularly interested in exploring the exotic-looking, Southeast Asian-inspired world of Spira, in which magnificent images of nature alternate with the dreariness of crumbling civilization. 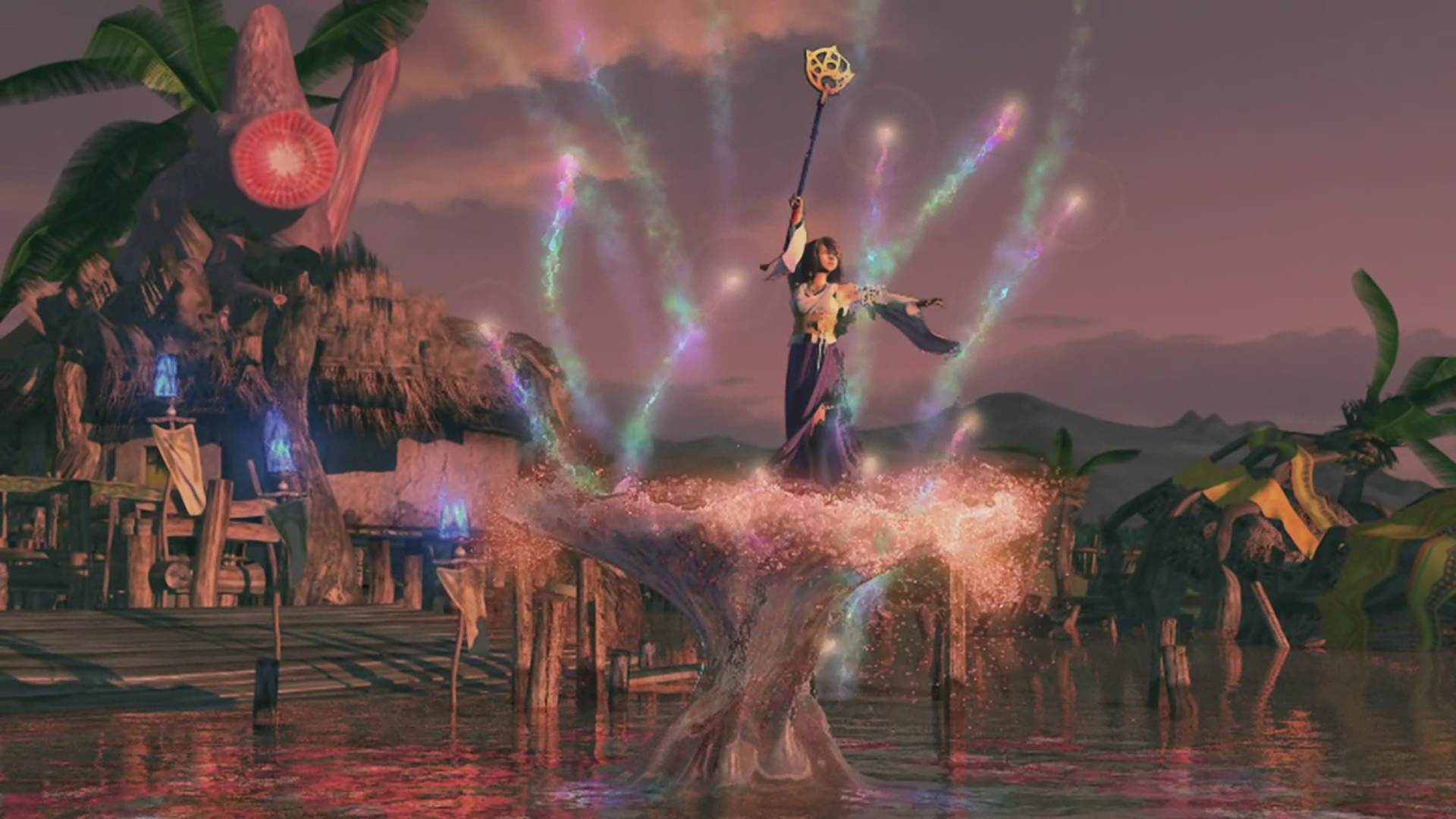 The accompanying storyline may be quite simple and based on some well-known genre cliches, but it still works well for me. Especially with twists and turns that I already knew and that could be seen miles ahead, I was amazed at how effective they were developing their emotional impact. This conflict-ridden mixture of fatalistic oppression and sunny lightheartedness creates a unique atmosphere that I usually only know from the later Xenoblade Chronicles.

One reason why Final Fantasy X wasn't my favorite then, as it is now, is the obnoxious protagonist Tidus. For me, the tanned blonde with his crazy manners and winning attitude is simply the JRPG main character equivalent to the pop group Modern Talking.

His annoying behavior caused me to roll eyes in a few cutscenes, not only in the cringy scene that has since become a meme. Even the simple-minded chattering Wakka could no longer be found as ironically funny as it was back then. I had also completely suppressed what an annoying asshat Seymor, Tidus' opponent, is.

The fact that these characters get off so badly for me can also be due to the English dubbed version. In comparison, the Japanese voices sound much more pleasant to me. Especially with Seymor I don't have to keep thinking about the Simpsons episode in the original sound, in which villain Sideshow Bob hides in a zeppelin and is discovered by his fistulous voice caused by helium. I find it more than annoying that you can't switch to Japanese synchronization in the remaster, but that's just like it was in the original game.

Fortunately, the other characters compensate: Yuna's development from damsel to rebel is still exciting to see. Even her burgeoning romance with Tidus works for me, despite Tidus himself. Meanwhile, I never got bored of the cool manner of the super-cool witch Lulu and the witty attitude of Auron. The silent beast warrior Kimahri is a more than pleasant contrast to the jumping jack Tidus. Even the bright hobbyist Rikku, intended to be predestined nervous character, was sympathetic to me because of her caring manner. Overall, I was very fond of the party over the time - despite a few Blitzball failures.

The end of the journey together was reached much faster than my first run. When I first played it, I sat at the game for a good 50 hours. This time I was in less than 40 hours at the final boss. Which of course I didn't stand a chance yet. So I had to go to the side tasks after all. Of course, no ten Chocobos will force me to voluntarily play Blitzball. When I buy a JRPG, I want to deal with RPG mechanics and not be served FIFA light. So I decided to do other things. 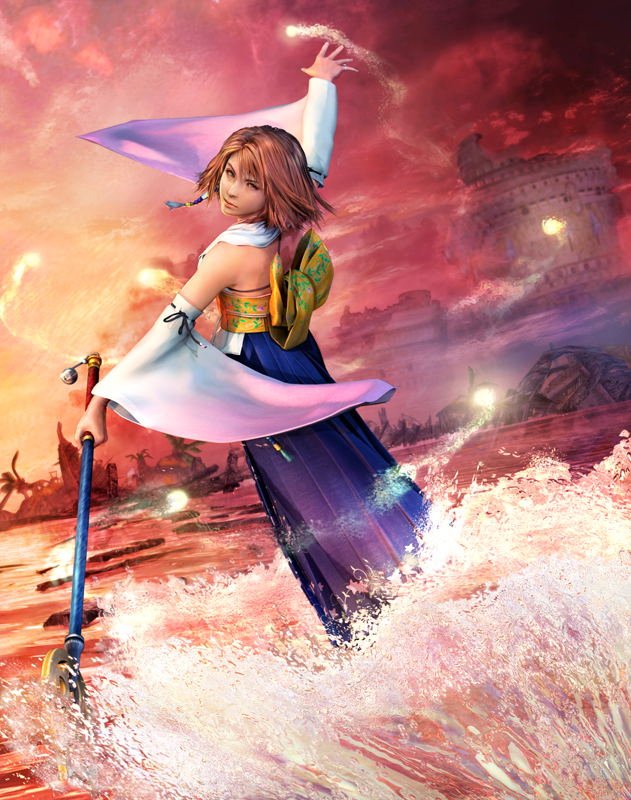 Unfortunately, I did not get very far with obtaining all summonable beasts. To do this, all the hidden treasures in all temples have to be recovered, which I have not always done. And later they are guarded by the difficult to defeat Black Bestia.

I gave up the butterfly hunt in the Macalania forest after a couple of half-hearted attempts. I didn't get very far in the Omega ruins because of the tough opponents.

After all, I've done almost the entire monster farm side quest, which involves capturing all kinds of monsters in the different areas. The rewards from this quest alone were enough to give my equipment all sorts of useful properties. And of course, I have collected enough skill points to move my characters a lot of spaces on the sphere board, where abilities can be learned and status improvements can be achieved.

Well prepared, I was finally able to defeat the final boss, even if it was still a tough fight. The way there has invested me completely in the game. I even sympathized with the clown Tidus. For me, the end credits were more than an emotional farewell.

"You can win if you want
If you want it you will win
On your way you will see
That life is more than fantasy
Take my hand, follow me
Oh you gotta brand-new friend
For your life"

Where does Final Fantasy X stand with me 20 years after it was released? Apart from some weaknesses like the sometimes really high random combat rate (and Tidus) it has held up exceptionally well. It calls up the strengths of the Final Fantasy series - exciting worlds, visually appealing characters, emotional stories, accessible game systems, beautiful soundtracks - again at a high level and successfully wraps them in a modern guise that still works well today. In addition, the game has noticeably increased in my personal favor.

On the one hand, this is due to the fact that this time, unlike then, I approached the matter with enthusiasm for JRPGs and Final Fantasy, and on the other hand, because I now appreciate the stylistic closeness to my favorite parts VII and VIII much more. Final Fantasy X still doesn't come close to that, but while I found the game only "good" the first time, it has now achieved a secure third place in my hard-fought Final Fantasy Top 5. At the point: all s Happy 20th Anniversary, Final Fantasy X, and congratulations on a well-deserved bronze medal! And sorry, Tidus, it's not always enough for the top step on the podium.