Square Enix - Tested on the Nintendo Game Cube in 2005

For centuries, people in the world of Final Fantasy Crystal Chronicles are living in constant danger. Not by the usual monsters or a devilish villain - no, the atmosphere of the world has been polluted with a deadly gas called "Miasma". Only areas surrounding some special crystals are inhabitable for the main races, the humanoid Clavats and Selkies as well as the dwarven Liltys and the strange-looking, bird-like Yukes. So, as time proceeded, villages and towns have been built near the bigger crystals so that people can make a living there. The problem is, the crystals' power only lasts for one year - after this year, it has to be moistened with a chalice full of a special water from mana trees. Every village in the world - only a few remained - has a crystal caravan looking for fresh mana trees where they can gain enough myrrh drops for their villages' crystal.

Final Fantasy Crystal Chronicles, unlike other Final Fantasy games, is a classical Action RPG in the style of Zelda or Secret of Mana. The difference to the games mentioned is, that the story isn't too dense on the surface. To reveal all the reasons why everything is the way it is, you have to read and talk a lot. As mentioned above, you have to fill your chalice every year to secure your villages' survival. Yet, you're not under time pressure. One year is over after you collected three drops of myrrh. The problem is, that every drop has to be gained in a dungeon. So you have to clear three dungeons, including a nice boss. 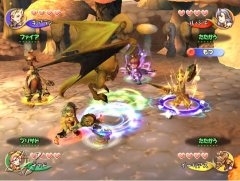 You can choose when to finish the game, by the way. Well, you can't finish it before the fifth year (Five years with three dungeons make 15 dungeons, which is the amount of the dungeons available on the world map), but the game is open-ended, if you wish it to be. I heard of people playing more than ninety virtual years. Since there are only15 dungeons, you'll have to repeat them in order to continue your journey. To make the repetition years less boring, the dungeons are getting more difficult after you finished one, two or three times. There are also some new areas in new dungeons if you repeat them.

Nevertheless, as a solo player, continous repetition isn't too thrilling. The problem is, that you have to play at least 14 years to reveal the complete story. And if you want to know even more about the backgrounds, you have to play more. So for singleplayers, the game is fascinating at the beginning, but has some serious gameplay-flaws due to the repetition and the story that needs to be worked out.

But Final Fantasy Crystal Chronicles was never meant to be a single player game. It's been designed to be a multi player game. Along with up to three friends, you can go to the journey and power up you and your friends after every dungeon. This gives the game some in-mate competition, although you're playing for the same goal. The multi player feature is the main part of the game, sadly enough, you need a Game Boy Advance for every player. This makes it a little expensive... But the reasons are clear why this feature was implemented. If everyone could access the menu and pause the game with this action, the gameplay would certainly lose some of its flow, like in the old Secret of Mana days. So, everyone has his own menu and does not pause the game while entering it. The character in the menu will run along his or her buddys on his / her own.

While the gameplay is quite twisted, the graphics or audio gives no reason to complain. Final Fantasy Crystal Chronicles is one of the most beautiful RPGs ever made, and the soundtrack - although not created by Mr. Uematsu - is very decent as well. Controls are smooth, even with the Game Boy as your controlling unit.

This game is difficult to rate. For singleplayers, it's difficult and boring after you have repeated the dungeons, while it's very great as a multi player game with friends. Due to the repetition flaw, it does not deserve a "classic". For multi player sessions, even repetition is lots of fun and a thrilling challenge. Still, some more dungeons and a story that's less hard to discover would have resulted in a higher ranking.