Enix - Tested on the GameBoy Color in 2020 by Kaoru

It is the year 1986. Japanese Role Playing Games are in their infancy. Only a hand full of them have appeared on PC platforms so far. Enter Yuji Horii. Coming back from a business trip to America where he experienced the likes of Ultima and Wizardry, he decided to make his own RPG for the NES. With famous manga artist Akira Toriyama doing the character designs and war crime denying homophobe Koichi Sugiyama composing the music. 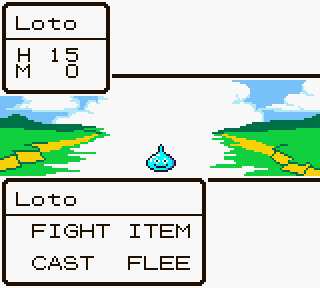 The game was a runaway success, single-handedly defining and popularizing the previously niche genre. It is the foundation of what to this day is one of Japan’s biggest moneymaking franchises and one of Square Enix big three.

However, back in early 1986 things were simpler yet. The DracoLord is trying to take over the world and the princess has been kidnapped. You, the descendant of legendary hero Loto, are chosen to get her back and defeat the big bad. After all, heroism is hereditary: Even if you are Level 1 and have no equipment, you are the person for the job.

Funnily enough, the castle of DracoLord is just across the river from your starting location Tantegel. But since this is a JRPG there is of course no simply swimming over but a quest to build a bridge or hire a ship necessary. In the case of Dragon Quest, it is fetching some items that indeed do build a magical bridge. You wouldn’t be strong enough to defeat him yet anyways. 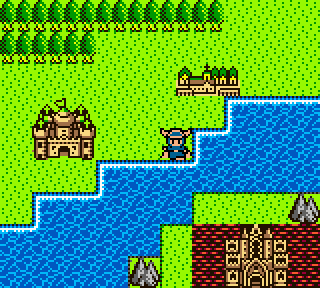 Indeed a good chunk of Dragon Quest is filled with grinding. Both for the experience points to level up and the money to equip better stuff. Though not every new upgrade in every new city is mandatory, or at least not in the by me preferably played GameBoy Color remake. Which makes the game a bit easier, the grind shorter, has a better user interface and adds some nice intro screens to add to the little story there is.

There is also quite some backtracking. As your quest will make the hero-in-making traverse the whole continent back and forth to gather all the necessary items needed to finish his journey. You can only save and find out how much experience you need for you next level at the King in Tantegel, which is more or less the central location of this world

Don’t worry: This is one of the earliest JRPGs so the world isn’t really that big. Going from Tantegel to one of its edges and back isn’t as annoying a track as this might sound. And there are always spells to warp right back later, making only one trip necessary. Also helpful is the light spell, which thankfully comes early in the heroes level ups, getting rid of the necessity of bringing torches to dungeons to see anything.

Our hero is an antisocial guy. Or someone who doesn’t want to bring other people in danger. Whatever your preferred justification is. The result being that he is the only character you control in this game The enemies are playing fair too, always only attacking one at a time. That makes a lot of the challenges in the game surprisingly binary.

Even with a couple of spells and healing items, you are usually either clearly strong enough to get through a monster-infested area or you are clearly not and need better equip or more levels. There is not a lot of guesswork or strategical options going on to change that.

To be honest, there is not a lot to get out of such an old game these days anymore. It is decidedly simple. Both the short quest, the standard storyline, the straightforward battles. Nevertheless, this is one of its remaining strong points to me nowadays. At least in the remakes that make it smoother to play. It is almost meditative how simple and straightforward the first Dragon Quest. I play it to get my retro fix when I’m not in the mood to think much and instead just want to grind a bit and finish within an evening or two.