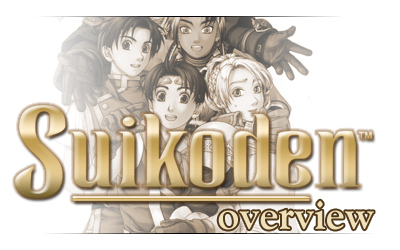 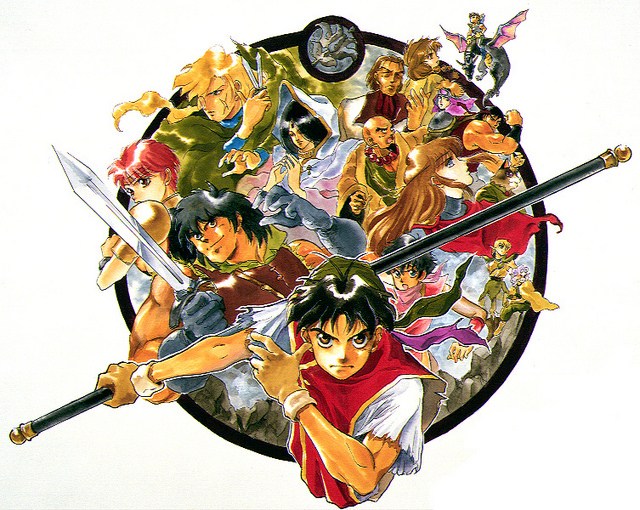 Suikoden was the game that started it all. Claiming to be "the first RPG on the PlayStation", Suikoden still looked a lot like a Super Nintendo game with its 2D graphics and the minor zoom effects in the battles. The storyline, however was the first of a kind. There was no japanese RPG before Suikoden, that had such an immense amount of recruitable characters. The 108 Stars of Destiny you can collect have their own personality on top of that too.

Suikoden's main character is young Tir McDohl, son of a great imperial general. Several years after his father fought along with the emperor in the war of succession, there's a little border-conflict going on between the Scarlet Moon Empire and the City-State of Jowston. Teo McDohl, Tir's father is sent there to negotiate and fight, if necessary. Meanwhile, Tir has to attend to some minor errands for the empire. While finishing one of those jobs, Tir's childhood friend Ted uses the True Rune "Soul Eater" engraved on his arm to get rid of some powerful enemy - this action causes the emperor's court magician (and love) Windy to unleash her true idendity as a witch searching for the Soul Eater. Wounded Ted hands over the cursed Soul Eater to Tir, who now has to turn his back onto the Empress, the Emperor, his country and as a result - his father. Suikoden is about taking over the empire to stop Windy and put an end to the corrupt regime.