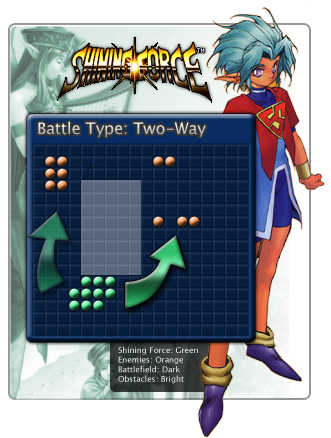 Examples:
Shining Force 1: Battle on your way to Marania

You'll often have to face a situation, where the two-way strategy is the best one. One battle is the best example how you can use this strategy for your advantage: The first battle of the second chapter in Shining Force 1.

The party is located in the southeastern corner of the battlefield at the beginning of the battle. After you passed some enemies and crossed a bridge you're faced with a situation like shown on the image of the little map. If you head towards the enemies in one group you're going to face a big group of magicians and strong zombies - often enough, this situation will end in a "game over"

But if you split your party as soon as you approach the big obstacle, the battle is going to be a lot easier. put your stronger fighters on the side with the bigger amount of enemies and step forward, but make sure both groups are about on the same height. If you did everything the right way, the enemies will split up and you have to fight a much smaller amound of those little bastards than you'd have to face when approaching them with your complete group.