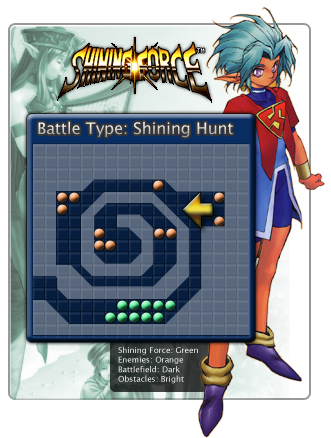 Originally invented in the final battle of Shining Force 1, the idea of "endless" battles was used excessively used in Shining Force 3. Some monsters appear at the beginning of a new turn if you've defeated them during the last turn. This is really painful.

The example map shows a simplified version of the Lookover Tower battle in Shining Force 3. The enemies on the upper right spot wil appear over and over again if you defeat them. Well, not really endlessly - after you defeated a specific amount of those monsters, they'll stop re-appearing.

So you either take on the opportunity to level up like a madman, or you just place two characters you don't need later on anymore on the spots where the enemies re-appear. It depends on you how much time you have left for playing arund with those beasts.

In the final battle of Shining Force 1, it is highly recommended that you place two of your weaker characters on the spots where the Skeletons show up again since you have to deal about the big boss.