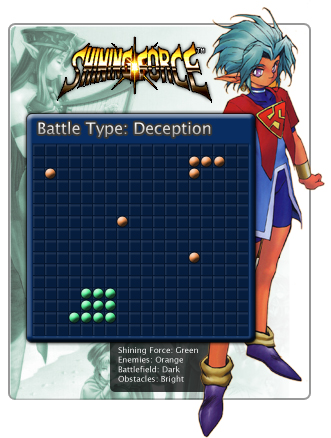 Unless you're not a complete Shining Force beginner you should notice that there's something fishy about battles that are surprisingly easy because there are not too many enemies around on the battle screen.

So it's no surprise that these battles are way harder than they look. After you reached some point at the map, tons of new enemies will appear and start to attack you from all sides, which can be especially painful for the weaker parts of your entourage like magicians or healers.

The best way to avoid such situations is to send some member of your crew forward who can "spot out" the situation. It's up to you if you send one of your strongest party members who can withstand some attacks on his way back or if you sacrifice a pawn - the most important thing is that most of your party is out of trouble while moving around the battlefield .