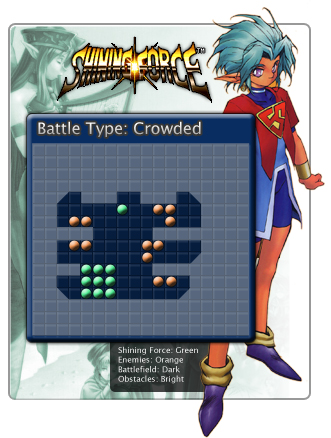 Usually Shining Force gives you plenty of space to maneuver your party around or think of strategical measures of how to win the battle.

Battles of the "crowded" type are different, since you don't have much space to make pincer moves or drawbacks. There's also a high possibility to get stuck by magical attacks - yet this does not have to be bad for you, since the enemy can be caught in those traps as well.

The best startegy for this type of battles is to move forward with your strongest fighters so you can block your opponents while your magicians and archers attack from second or third row.

It's almost impossible to avoid serious losses in this type of battle, just make sure that you ensure the safety of your separated leader (Shade Abbey and Conrad battles).