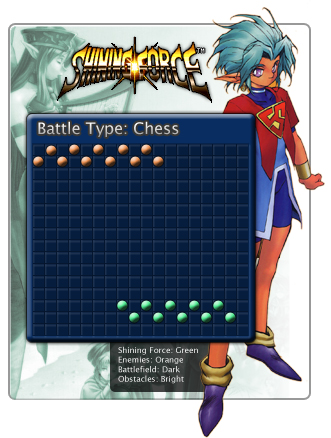 Unless you've leveled up enough, these battles can be really painful. You're outnumbered, neither are obstacles on the field nor can you use the terretorial structure for your advantage.

The chess battle in Shining Force 2 is a pain in the neck, much more than the one in Shining Force 3 is. I often ran into the battle rather underleveled, so I had heavy problems dealing with the mass of well-trained enemies heading towards me. If you're stuck in the same situation, you can either make good use your "Egress" spell or you'll try to get the chess King ASAP - this is a hard task and will grant the priests lot of money later on (you know, resurrection and such), but this is the easiest way to win the battle.

The fight against Braff is not as hard as the chess battle in Shining Force 2, but do not take it too easy, you're still outnumbered, and the enemy is heavily organized. The best way to win this fight in Shining Force 3 is to lure the enemy out and defeat the monsters bit by bit.